Looking to escape the hustle and bustle of the city? Planning your next staycation?

As a designated Area of Outstanding Natural Beauty, there are so many beautiful places to visit in Northumberland.

This underrated county is home to forty miles of coastline, extravagant castles, stunning national parks and plenty more for you to explore.

As the least densely populated county in the UK, it’s not uncommon to find you have whole beaches to yourself. How dreamy!

In terms of getting around, your best bet is to travel by car for ease and freedom but there is also a great bus network in the region if not.

So whether you’re a beach bum, nature lover or history buff, here are the 11 best places to visit in Northumberland for a fun day out!

This article is written by Faraway Lucy writer, Lucy Stanhope.

Otherwise known as Lindisfarne, this tiny island has so much to offer.

As the name suggests, it is a spiritual place, once home to St Cuthbert who allegedly held the power of spiritual healing.

Even now, it is still a place of pilgrimage for many as the last stop on St Cuthbert’s Way.

And some even refer to it as ‘the thin place’ where the heavens and the earth are closer to each other.

Make sure to check safe crossing times before you go as the causeway is cut off by tides twice a day, becoming inaccessible.

The best way to visit would be to stay a tide on the island (arrive before the causeway shuts for the tide and stay until the road reopens a few hours later). 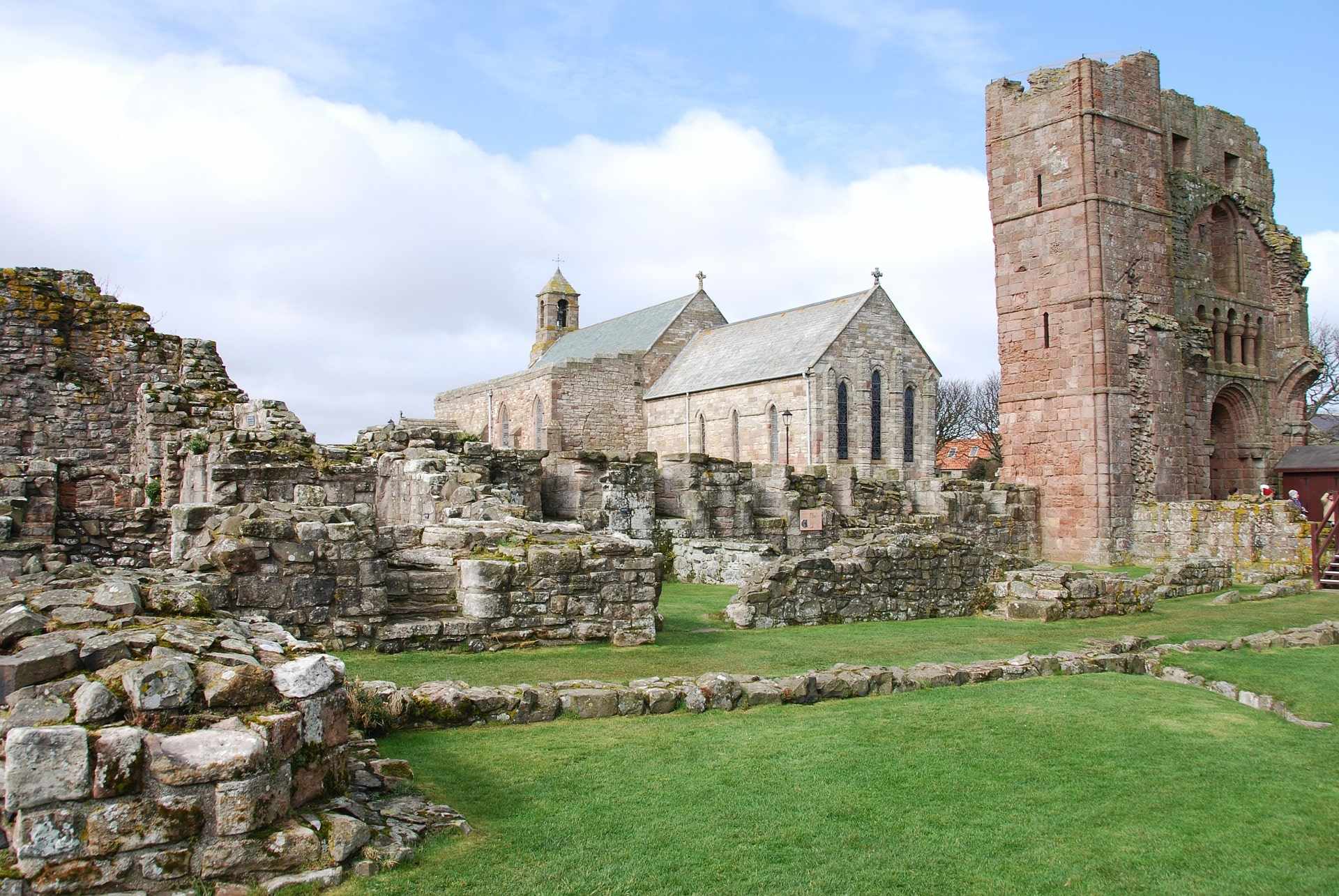 The first thing you’ll see when you cross the causeway is the 12th century Lindisfarne Priory, dubbed the epicentre of Christianity in Anglo Saxon times.

Take time to wander around the priory and take in the epic ruins as you discover more about the ancient monks who built the priory almost 1,400 years ago. 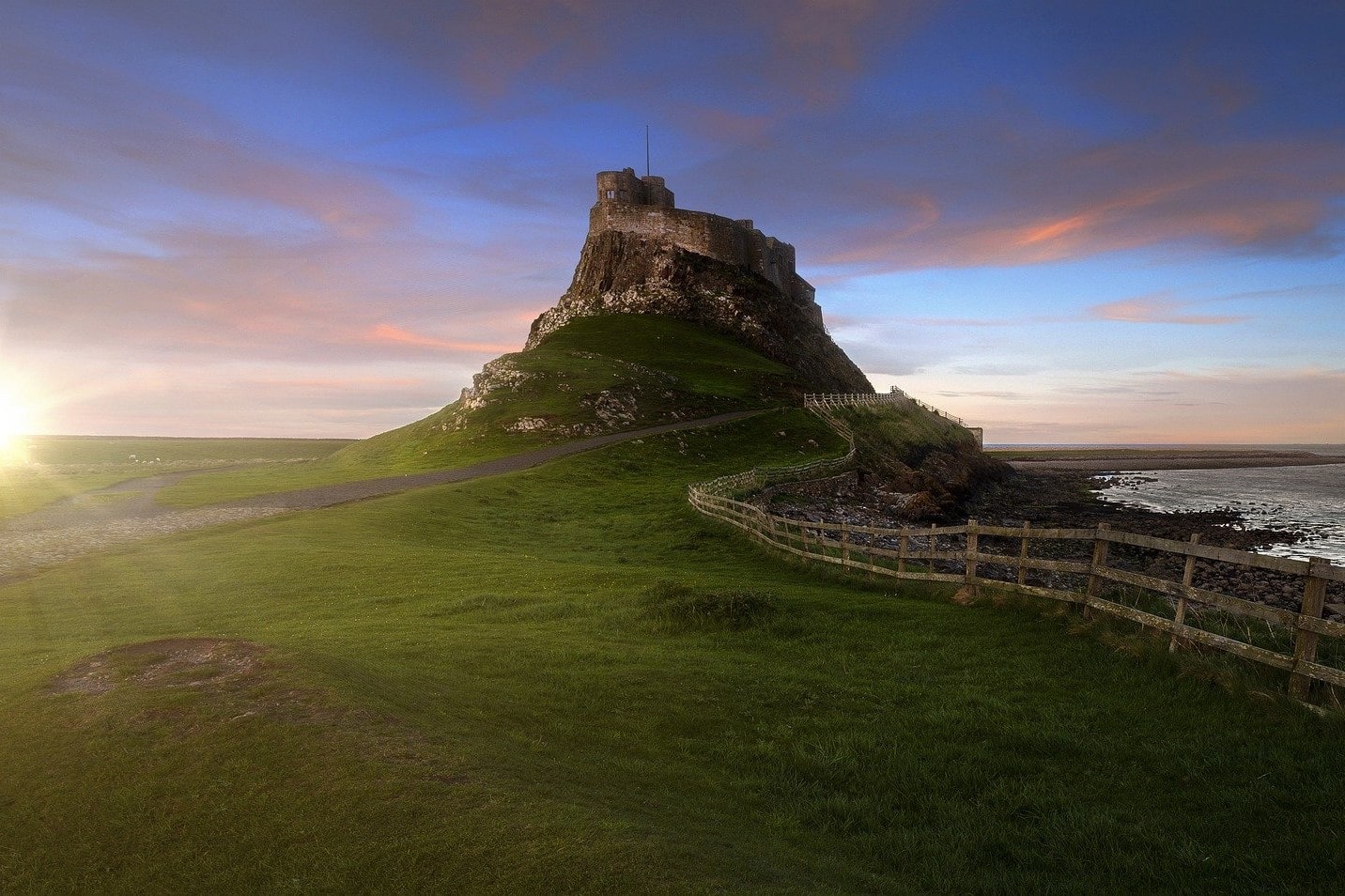 Next up is Lindisfarne Castle. Built on top of a volcanic plug with stones borrowed from the priory, the castle has a long history of military defence beginning in 1570.

However, it was never too strategically important so it’s really well preserved.

With breathtaking views of the coast, it’s also the perfect place to sit down and have a picnic.

After your visit, make sure to wander up towards Castle Point for one of the best things to do in Northumberland.

This lookout point offers a great view of the Farne Islands and the spectacular coastline. 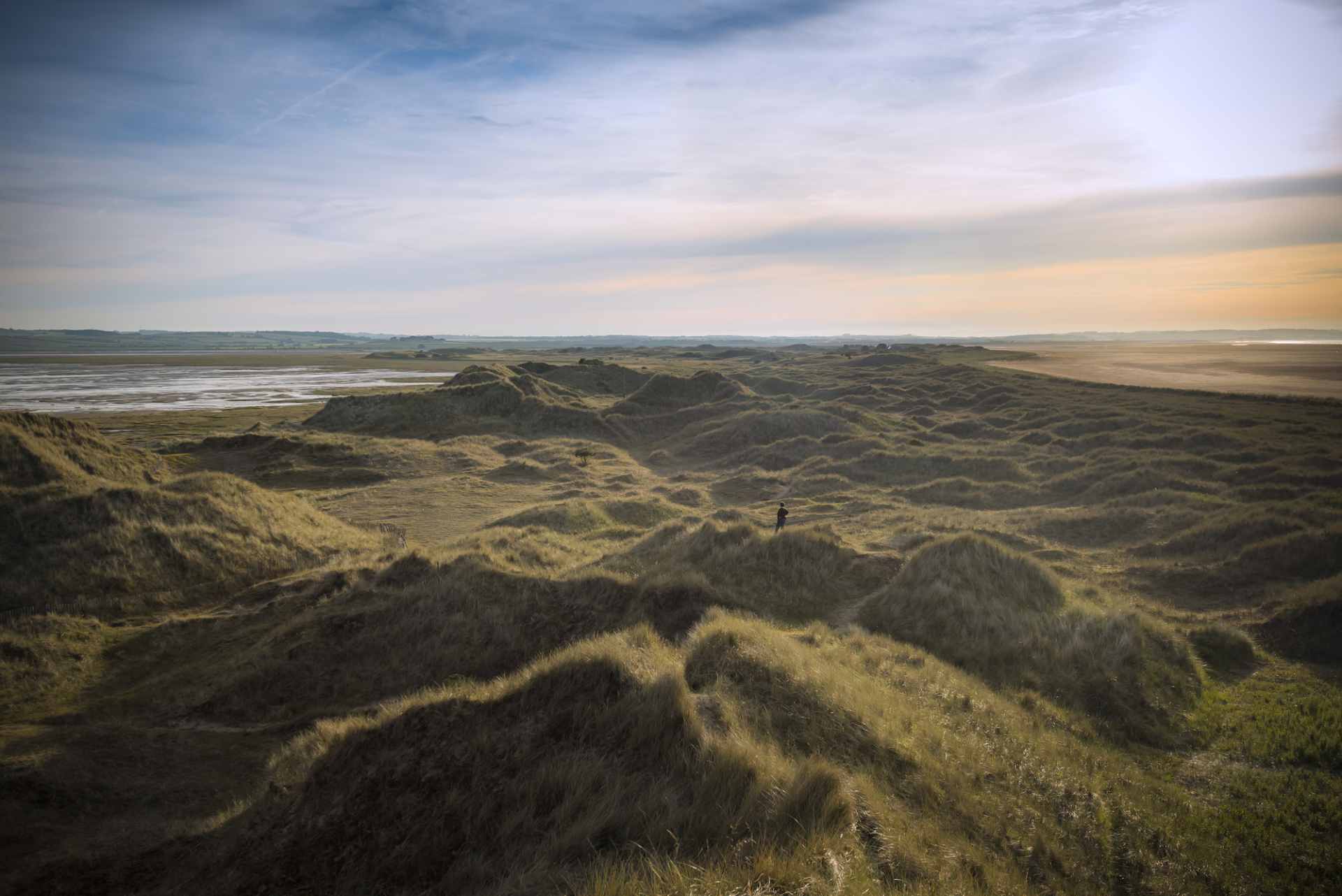 The island is also home to the Lindisfarne National Nature Reserve where you can spot seals and wildfowl.

The best time to see the seals is during the summer months on the Sandbanks and at Guile Point.

Avid twitchers will love Wild Window, a large hide next to the harbour which is free to enter.

It contains loads of information on all the wildlife you can find on the island. 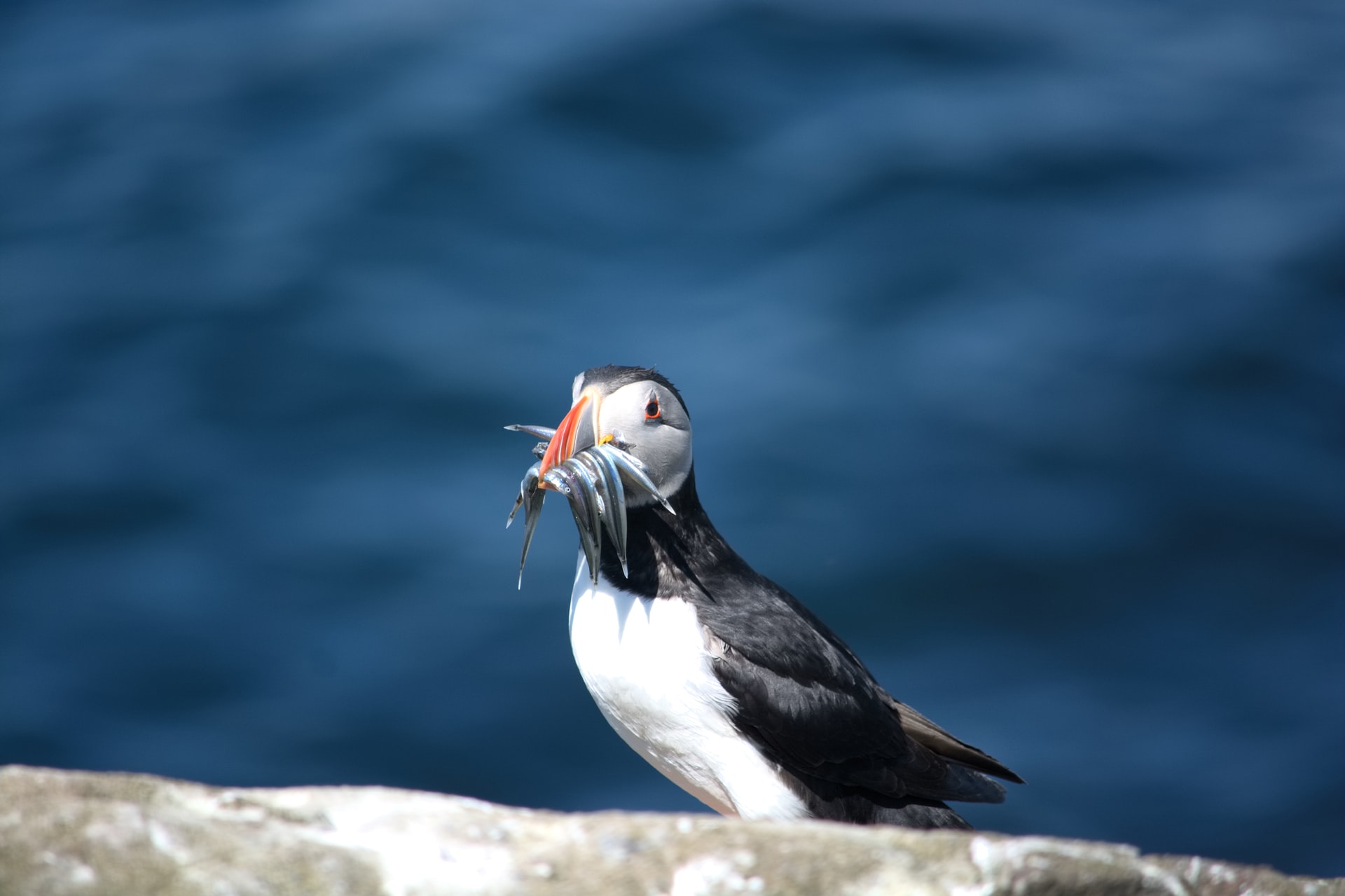 The Farne Islands are David Attenborough’s favourite place to see nature in the UK and it’s easy to see why.

Head to Seahouses Harbour and catch a boat over to the islands to see puffins, dolphins and seals galore.

23 species of seabirds call these islands home as well as over 43,000 pairs of puffins who reunite with the same mate each year.

Both Staple Island and the Inner Farne islands are open to the public, making them two of the best days out in Northumberland.

Between March and October, regular boat trips run between Seahouses Harbour and the islands, starting at around £10 per person.

There’s no need to book in advance as it’s easy to buy a ticket on the day at any of the wooden huts lining the harbour.

Serenity Farne Island Boat Tours and Billy Shiel’s Boat Trips both sail daily in the summer months and have loads of good recommendations.

Top tip: bring binoculars and you’ll be able to see incredible views of Bamburgh Castle and the Cheviot Hills. 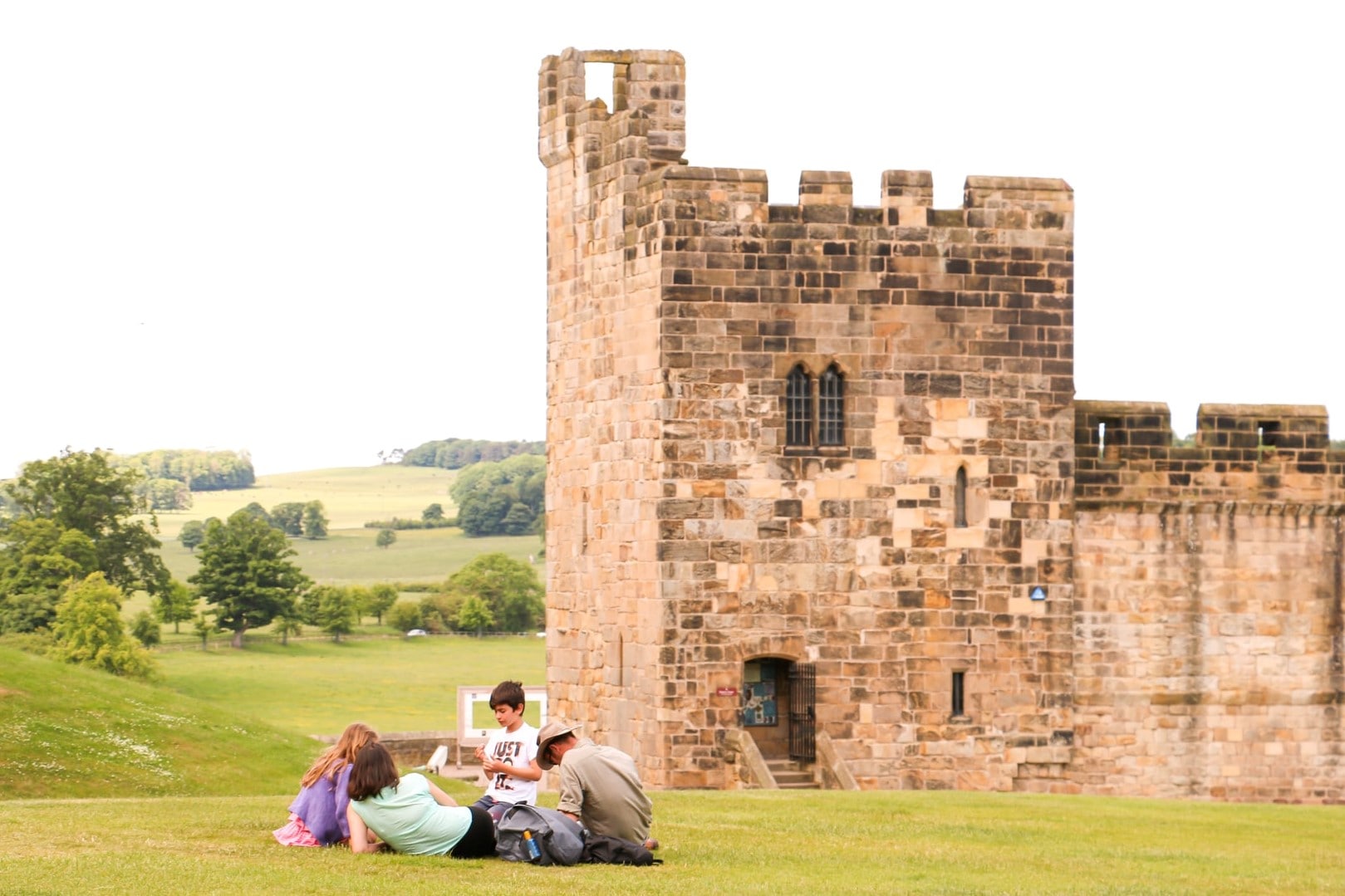 Alnwick Castle is a truly magical setting and one of the best days out in Northumberland.

You may even recognise it from scenes in Downton Abbey and Harry Potter.

Birthplace of Harry Hotspur, son of the first Earl of Northumberland, it’s now known as one of Britain’s most iconic castles.

Just round the corner is the beautiful Alnwick Garden, a modern garden created by the Duchess of Northumberland.

It’s home to the largest collection of European plants in the UK and the largest Japanese Cherry Blossom Orchard in the world.

Having visited when I was younger, I have fond memories of running in and out of the water features to cool down on a hot summers day.

The Treehouse Restaurant located on the grounds is also worth a mention.

It’s a super unique restaurant with a fabulous interior that makes you feel like you’re dining in another world.

Located in an old railway station, Barter Books is the largest second-hand bookshop in the UK. It’s a lovely, quaint place to relax and pick up some books for the rest of your trip and you can even refuel at the in-house, Station Café.

Fun fact: the original ‘Keep Calm and Carry On’ poster was discovered here in the year 2000! 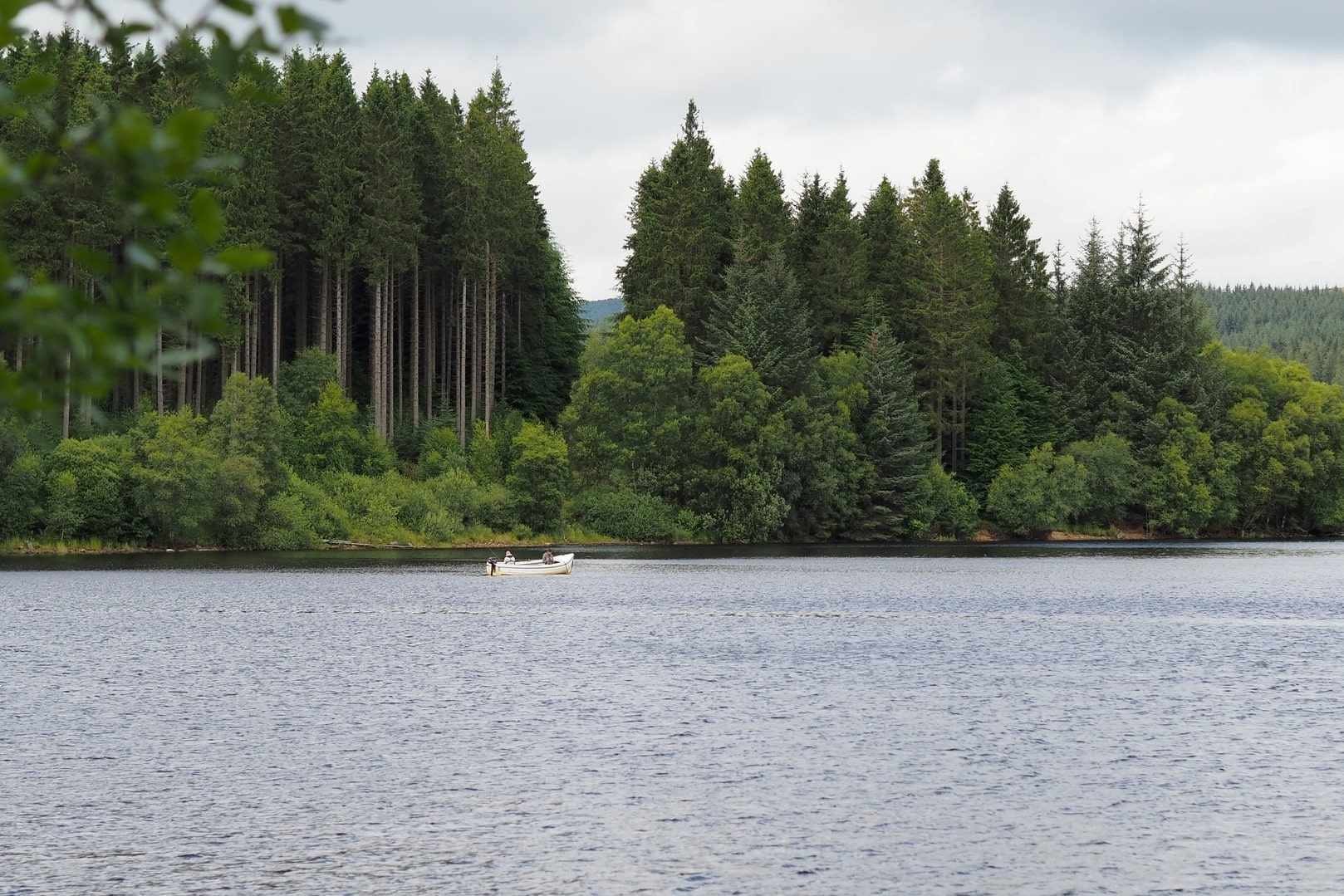 On a sunny day, Kielder can make you feel like you’re in a Scandinavian forest.

As the largest man-made lake in Northern Europe surrounded by a 250 square mile forest, it’s a hive of activity and adventure.

Some of the best things to do in Northumberland are found here, from mountain biking and water sports to Segway tours and Horse Riding.

Kielder Observatory is part of the Northumberland International Dark Sky Park which spans almost 580 square miles and is the second largest area of protected night sky in Europe.

It’s estimated that 85% of the UK population have never seen a truly dark sky.

So this is your chance to experience something truly unique!

Events occur daily starting from £20 and can be booked via the website. 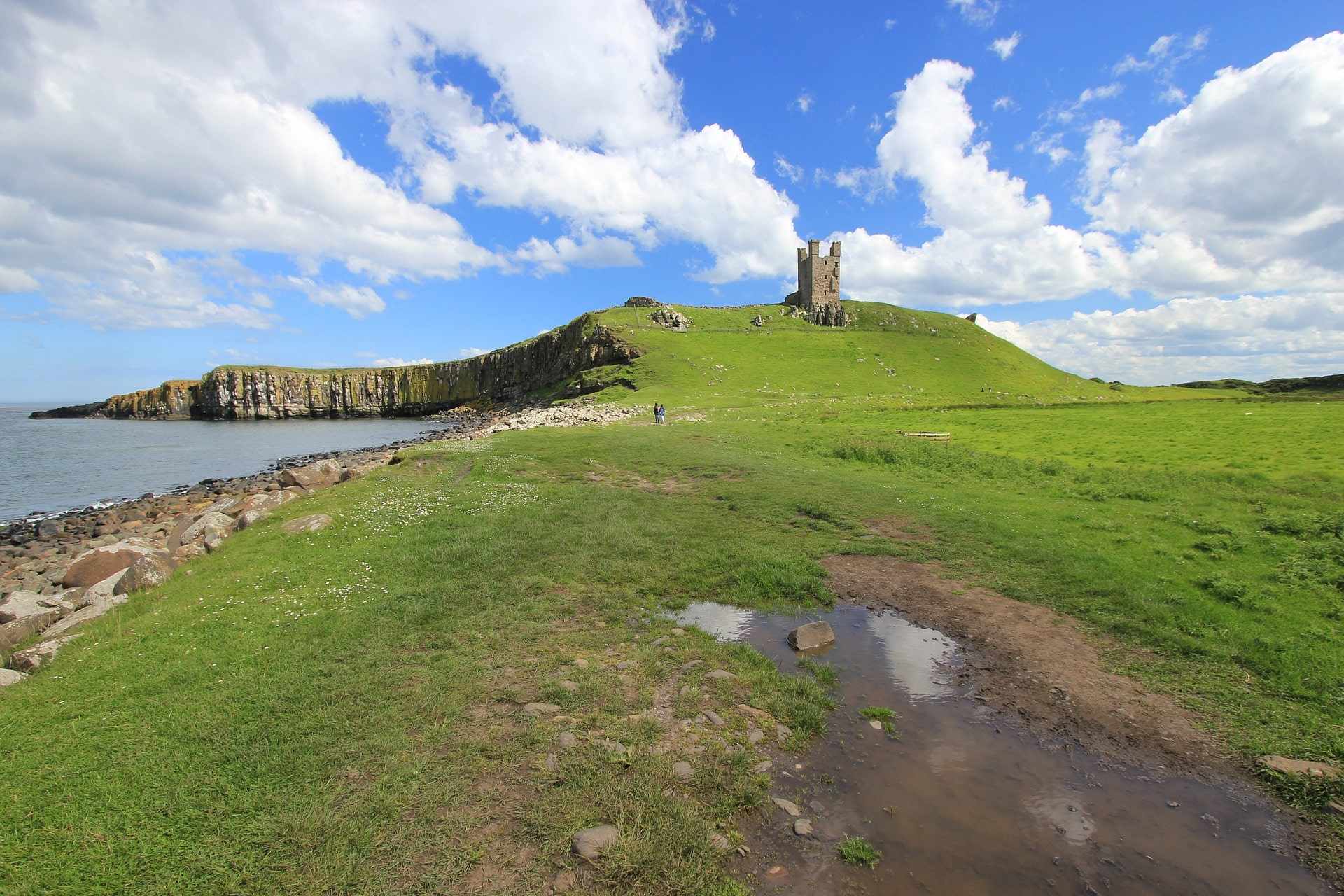 Embleton Bay is gorgeous and I’m not kidding when I say it may be the best beach I’ve ever been to.

Tucked away behind a golf course, it’s completely unspoilt and may well be Northumberland’s best-kept secret.

Stroll south along the beach to Dunstanburgh Castle, a site of battle between the Scots and the English, to admire the ruins. Did you know that Northumberland has more castles than any other county?

Afterwards, head north to Low Newton and make a pit stop at The Ship Inn which is famous for serving fresh, local food.

Their pies and crab sandwiches are to die for! 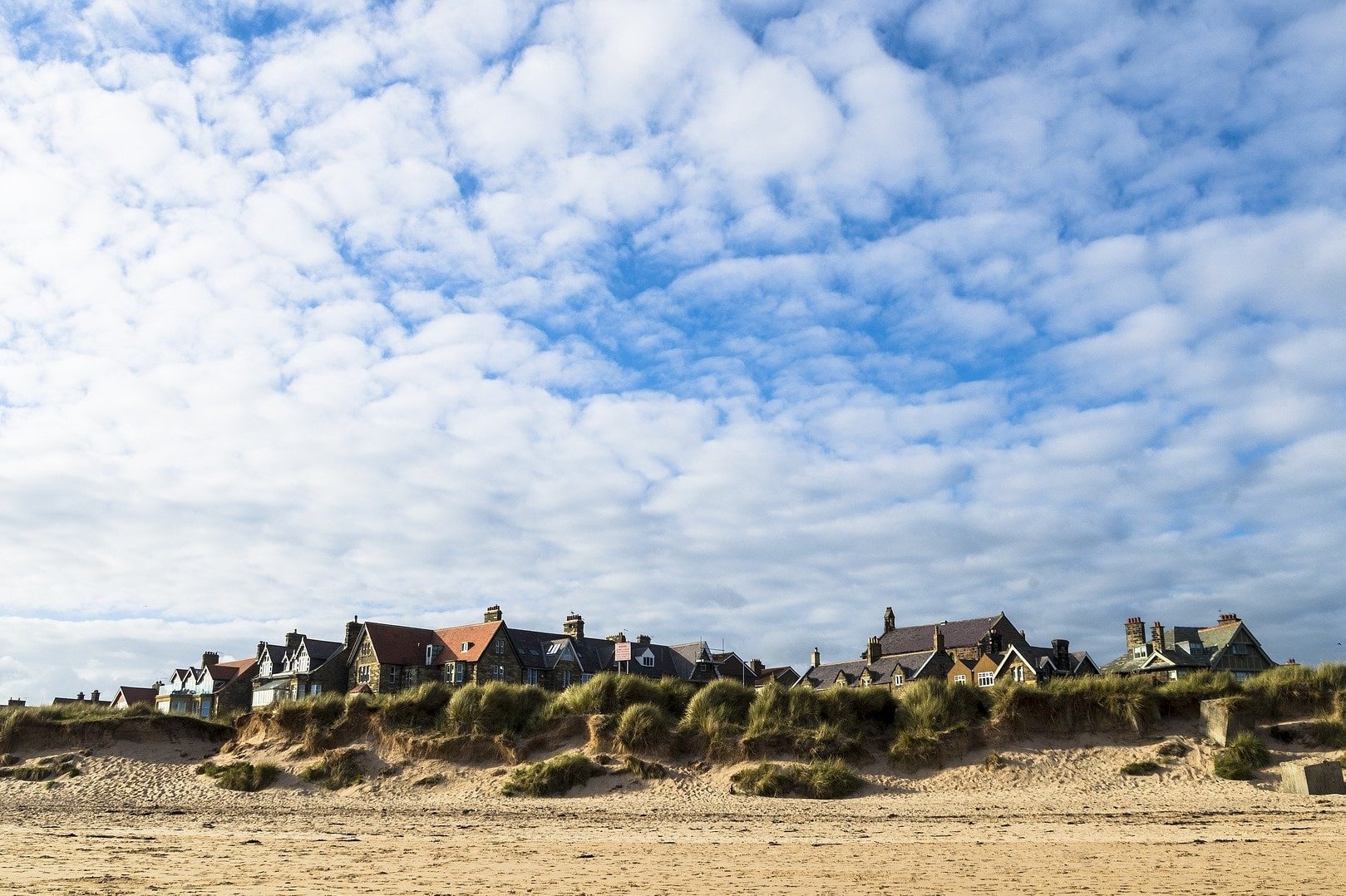 I did this walk with my family last summer and it was the highlight of our holiday.

Park up at Alnmouth Golf Club and follow the path to the beach and continue walking towards Boulmer which is the halfway point.

When you can smell smoked kippers you know you’re nearly there as the town of Craster is famous for this type of fish.

After eight miles of panoramic coastal views, the path conveniently finishes in the Jolly Fisherman Inn pub garden where you can grab lunch and a post-hike pint.

Craster is also famous for its kippers so be sure to pick some up at L. Robson & Sons Smokehouse.

You can then turn back and wander back along the beach or take the bus back to Alnmouth as we did.

If you love history, this is one of the best places to visit in Northumberland for you.

Originally built to protect the northern frontier of the Roman Empire in AD122, it’s now a World Heritage Site spanning 80 miles from the North Sea to the Irish Sea.

It’s thought to have taken three legions of infantrymen, each 5,000 men strong, six years to complete the Wall.

There are many ways to explore this feat of engineering including walking, cycling and taking the AD122 bus service. This means it’s completely accessible for everyone.

The most popular walking routes include Cawfields to Haltwhistle (6 miles) and Housesteads to Steel Rigg (8 miles).

Housesteads is one of the most well-preserved forts with the foundations of a hospital and flushable loos still visible. 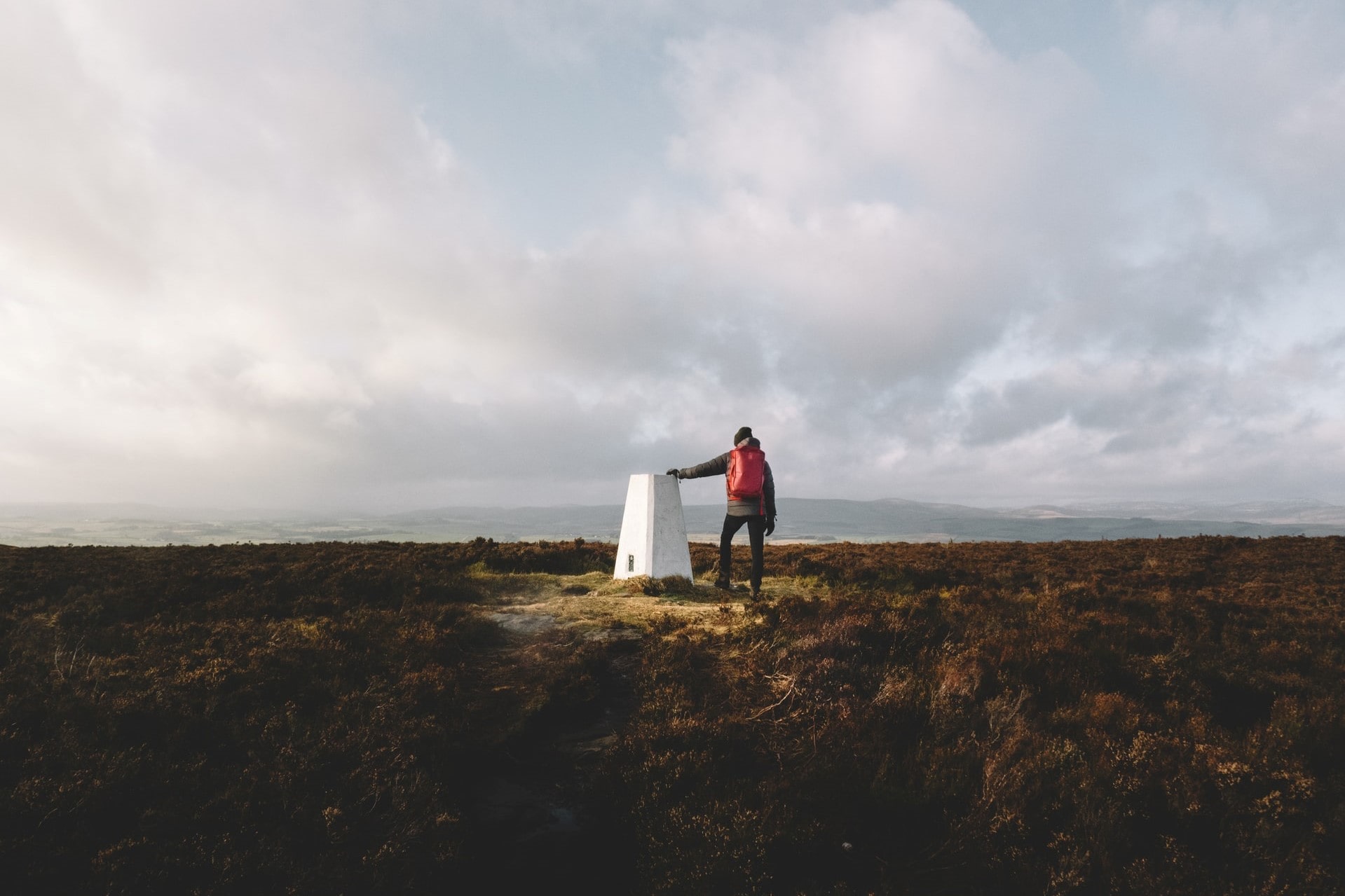 Basically some of the best things to do in Northumberland.

The Cheviot Hills which mark the Anglo- Scottish border are home to the highest point in the National Park at 815 metres.

Clamber up along the Pennine Way on a clear day and you’ll be able to see as far as the Lake District.

If you like wild swimming, be sure to visit Linhope Spout.

This stunning waterfall that descends eighteen metres down a rock face into a plunge pool is one of the best places to visit in Northumberland.

As the most photographed spot in the entire national park, Sycamore Gap Tree is perfect for your next Insta shot.

It even won the English Tree of the Year award in 2016!

Just east of Milecastle 39 on Hadrian’s Wall, it’s a fifteen-minute walk from Steel Rigg or Once Brewed car park.

And, like all the best things in life, the National Park is 100% free of charge. 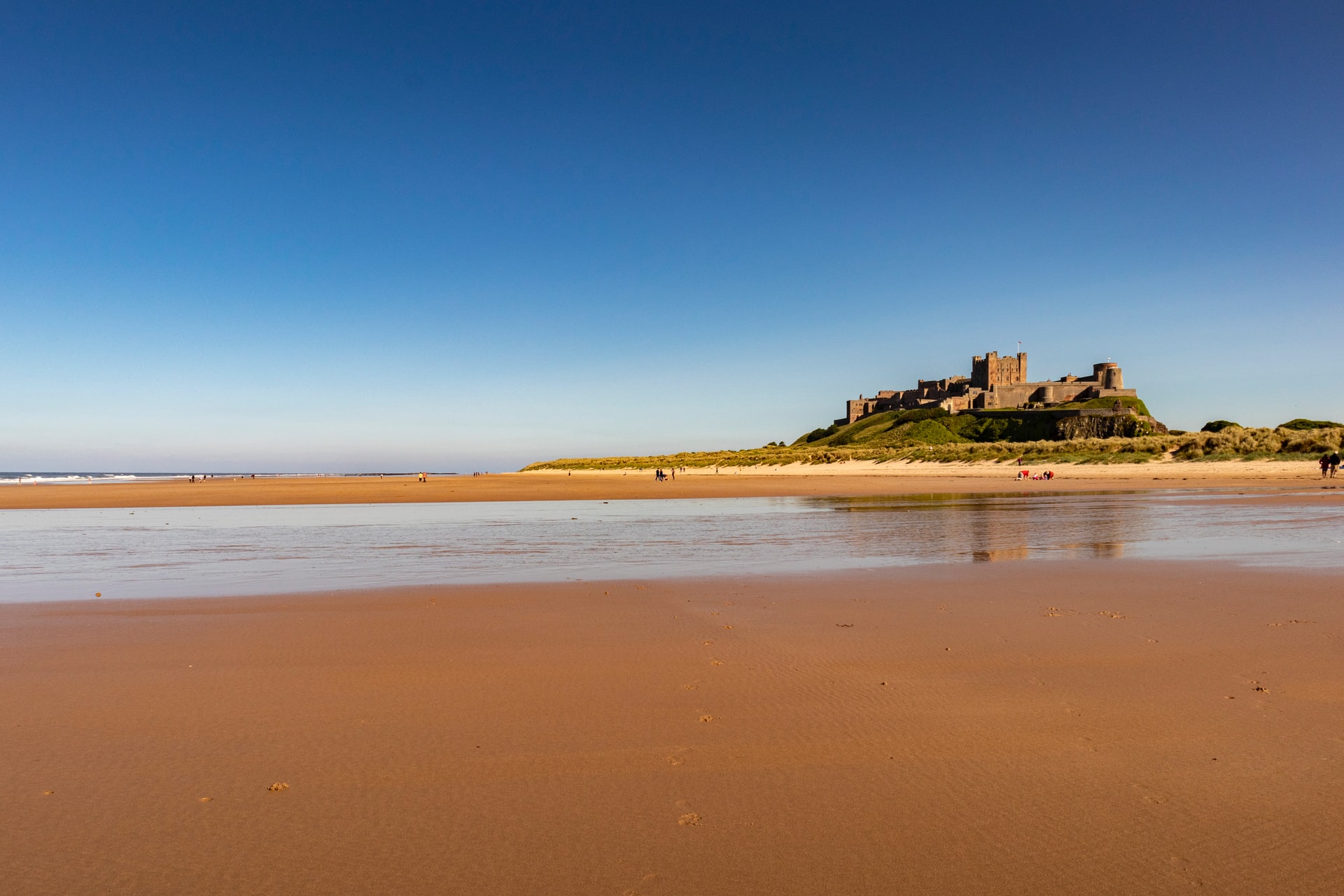 The perfect combination of culture and nature, this is easily one of the best places to visit in Northumberland.

First, head to Bamburgh Castle, an imposing sight of over nine acres, overlooking the beach below.

With a long history, beginning over 10,000 years ago in AD547, the castle has had many royal occupants including William the Conqueror and King James I.

It is now looked after by the Armstrong family who transformed the castle into the archetypal building it’s today.

The staff will be happy to share with you the many ghost stories and myths that the castle is home to!

Next, head down towards the beach to get a different perspective of the castle from below.

You’ll see just how grand it is! The beach is famous for surfing, and surf hire and lessons are available if you want to brave the waves.

Take a walk to the Sandy Hills dunes behind the beach to see the unique flora and fauna.

The dunes have been declared a Site of Special Scientific Interest for good reason! 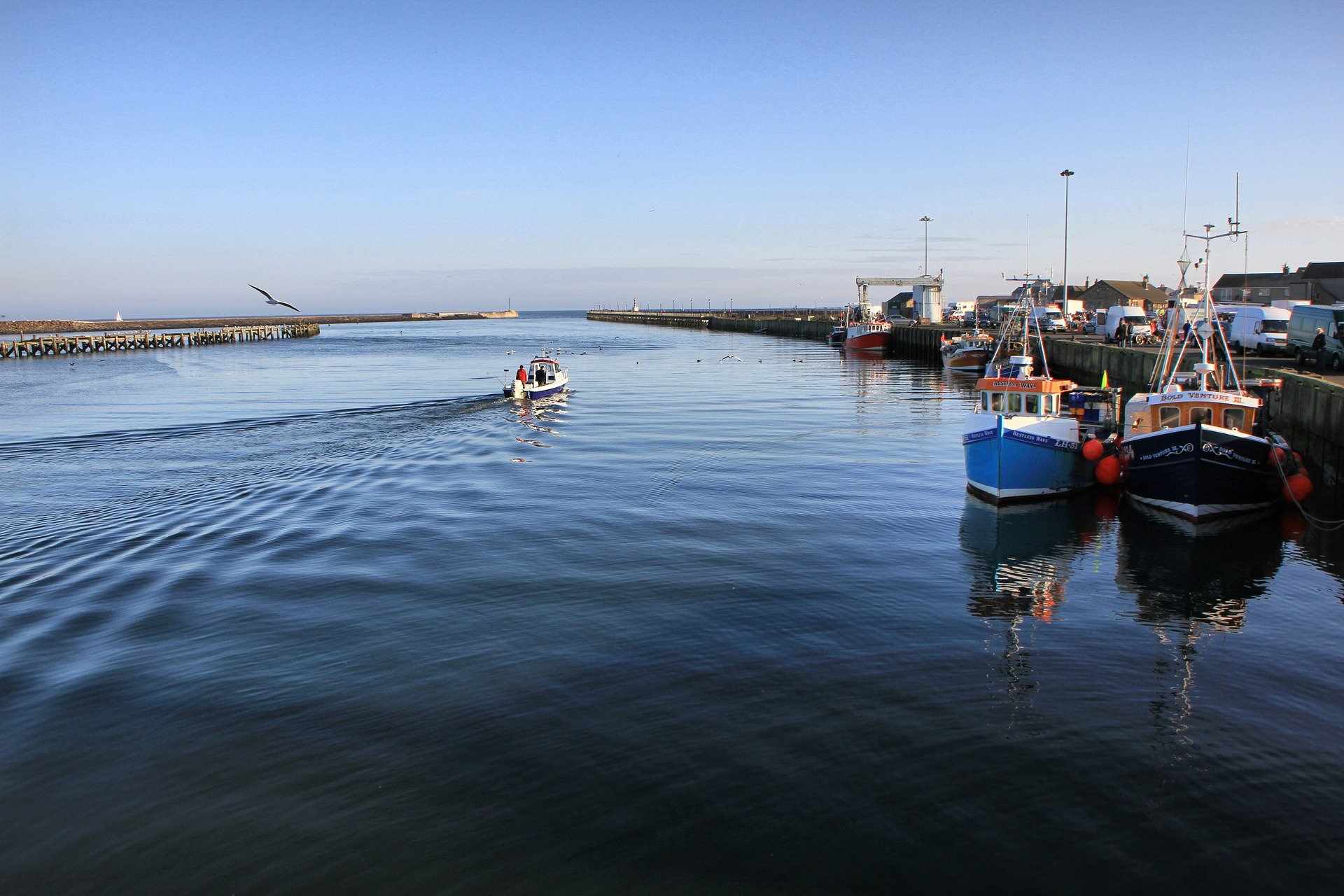 Dubbed the ‘friendliest port in England’, Amble is the gateway to the Northumberland Coast Area of Outstanding Natural Beauty.

Just a mile off the Amble coast, here you can see the 36,000 strong puffin colony.

Wander through the marina to the harbour’s wooden pods where you can find fresh fish and chips and souvenirs for sale as well as speciality restaurants such as The Old Boathouse and The Fish Shack.

Be sure to visit Spurelli, boutique ice cream makers and winners of the Golden Fork Award. 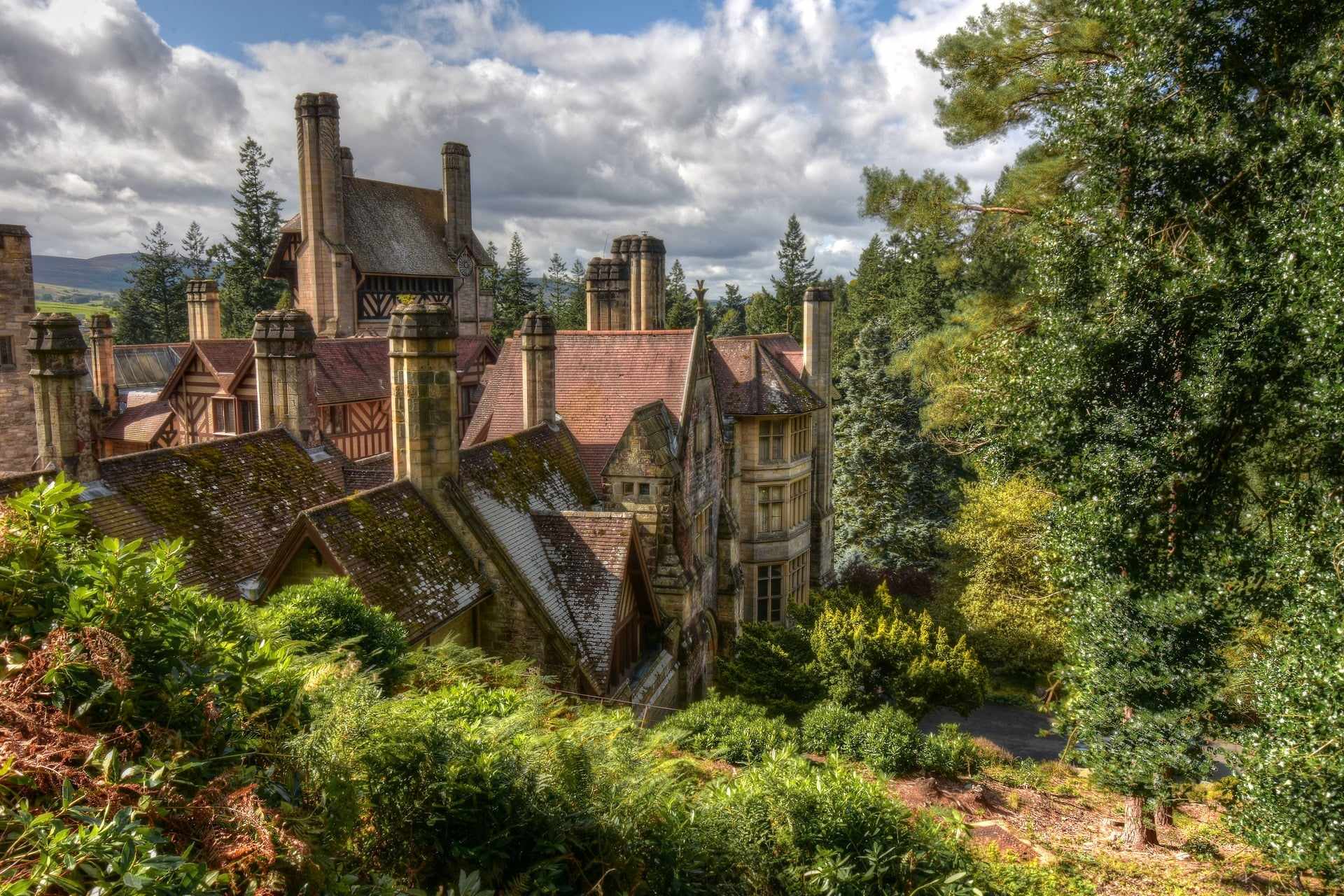 For one of my favourite days out in Northumberland, head to Cragside.

The first house in the world to be lit by hydroelectricity, there’s plenty to explore at this innovative National Trust owned estate.

The family home of inventor Lord Armstrong, built in 1880, will keep surprising you as you discover ingenious inventions way beyond their time. Look out for a Turkish bath suite, fire alarm buttons and working lifts.

The grounds of the estate offer more still, with a waterfall, rhododendron maze, over 30 miles of footpaths and over seven million trees and shrubs that Armstrong planted himself.

So there you have it: the 11 best places to visit in Northumberland.

Which has most caught your eye? All of them?

Well, what are you waiting for?

If you’re craving nature and adventure, why not take a gander over to one of the best places to visit in Northumberland.

You won’t regret it! 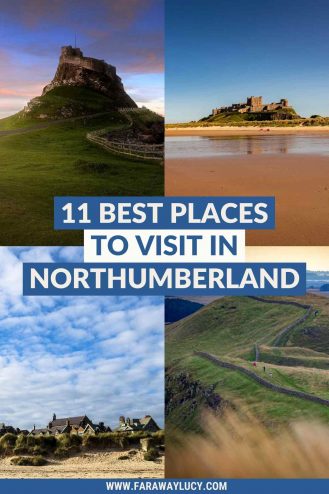 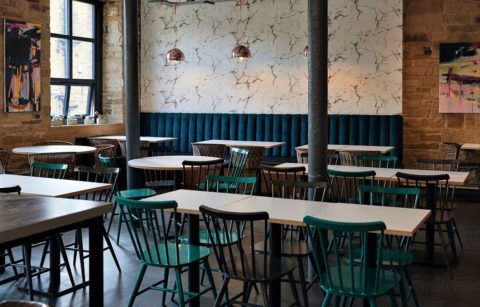 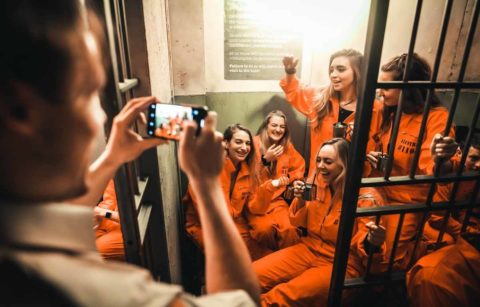 21 Best Indoor Activities in Brighton You Need To Try [2022] 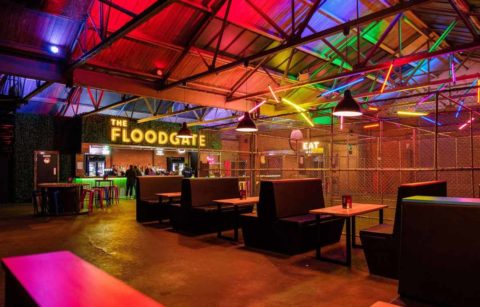 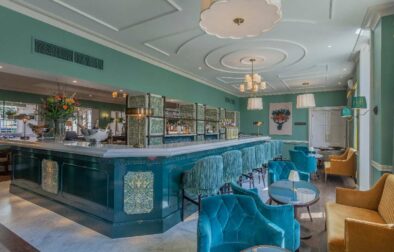 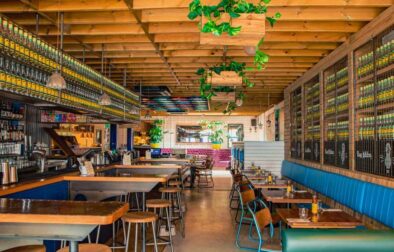 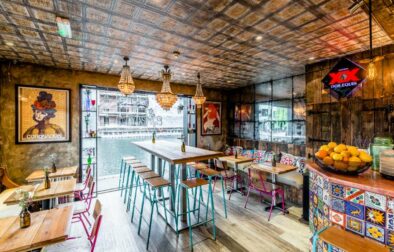 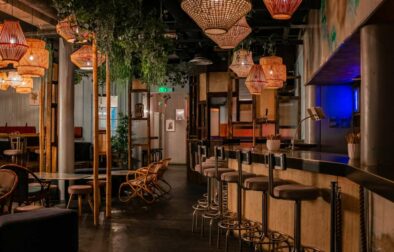 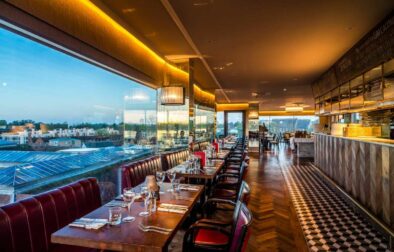