Uncategorized
53 years ago
by

The end of February saw two friends and I hitch-hike all the way from Exeter to *spoiler alert* BERLIN in under 36 hours, all thanks to Exeter Jailbreak 2016, a charity hitch-hiking competition seeing who can get the furthest. We managed to travel 850 miles across 5 countries, all the way from little old Devon to Germany’s capital, without spending a single penny. In total all of Exeter’s teams ended up raising over 20 grand for local charities, with our team raising the second highest funds of £767.86!

Our fearlessness led us to jump in one too many dodgy vehicles. But HEY, it was all in the name of charity and ticking something off the bucket list after all. But seriously, things got terrifying and at points I ended up texting Gaz, you know… just in case… As horrific as that sounds we all came back in one piece, other than my phone screen which is now smashed into lots of little pieces. We definitely have a story to tell the kids (… though it’ll probably be in the form of a stranger danger warning!). 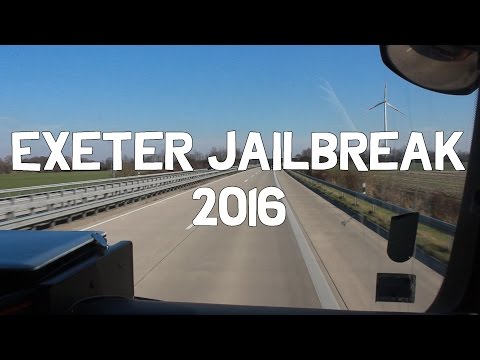 Standing in the University of Exeter’s Forum, on a cold February morning, with a backpack hanging off my shoulder and a foam finger clutched in hand, I began to question “What on earth am I doing?” All the teams were huddled around dressed up in onesies and tutus and colourful sombreros. Our team of three girls went as Runaway Brides, wearing white tutus and cheap veils from eBay which probably made us look more like a hen party than a charity organisation. When you’re stuck in Amsterdam Central Station at 4 am on a Saturday morning it’s really hard to escape that stereotype, but more on that later! Before we knew it the Forum erupted with noise as we began to count down from 10. 9. 8. 7. 6. 5. 4. 3. 2. 1. And we’re off! 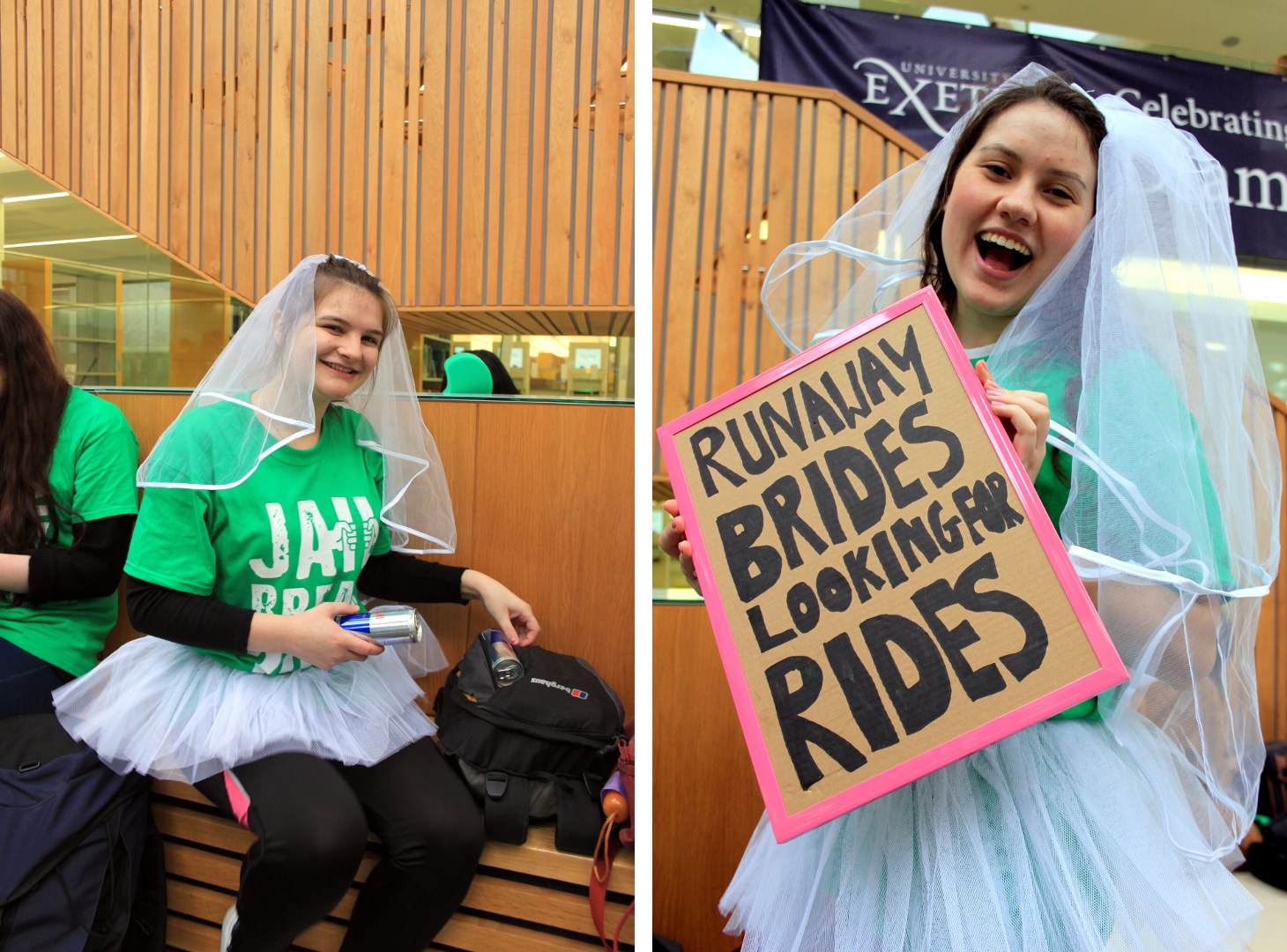 Hitch-hiking through South West England, a.k.a no man’s land, on the Friday morning was a struggle to say the least. Unlike most teams who used their brains by heading to Bristol and then to London, using the luxury of motorways, we decided to slowly head East through small farming villages.

Our first hitch took us to Lyme Regis. Yep, that’s right, the coastal town in West Dorset very far away from any main roads. Whilst it’s a gorgeous little seaside resort, it wasn’t going to take us out of the country any time soon. I did, however, pass a lovely jewellery shop, Lucy-Ann, that is named after me, Lucy Ann Ronan.

By 1:45 pm, three hours into Jailbreak, we found ourselves in Dorchester, the county town of Dorset. We were stuck in Dorchester for an hour and a half, where we were kicked out of a service station by a lady who started lecturing us about how dangerous hitchhiking is. We were so desperate for rides at this point that we even decided to hop in a car that was going in the direction we came from. 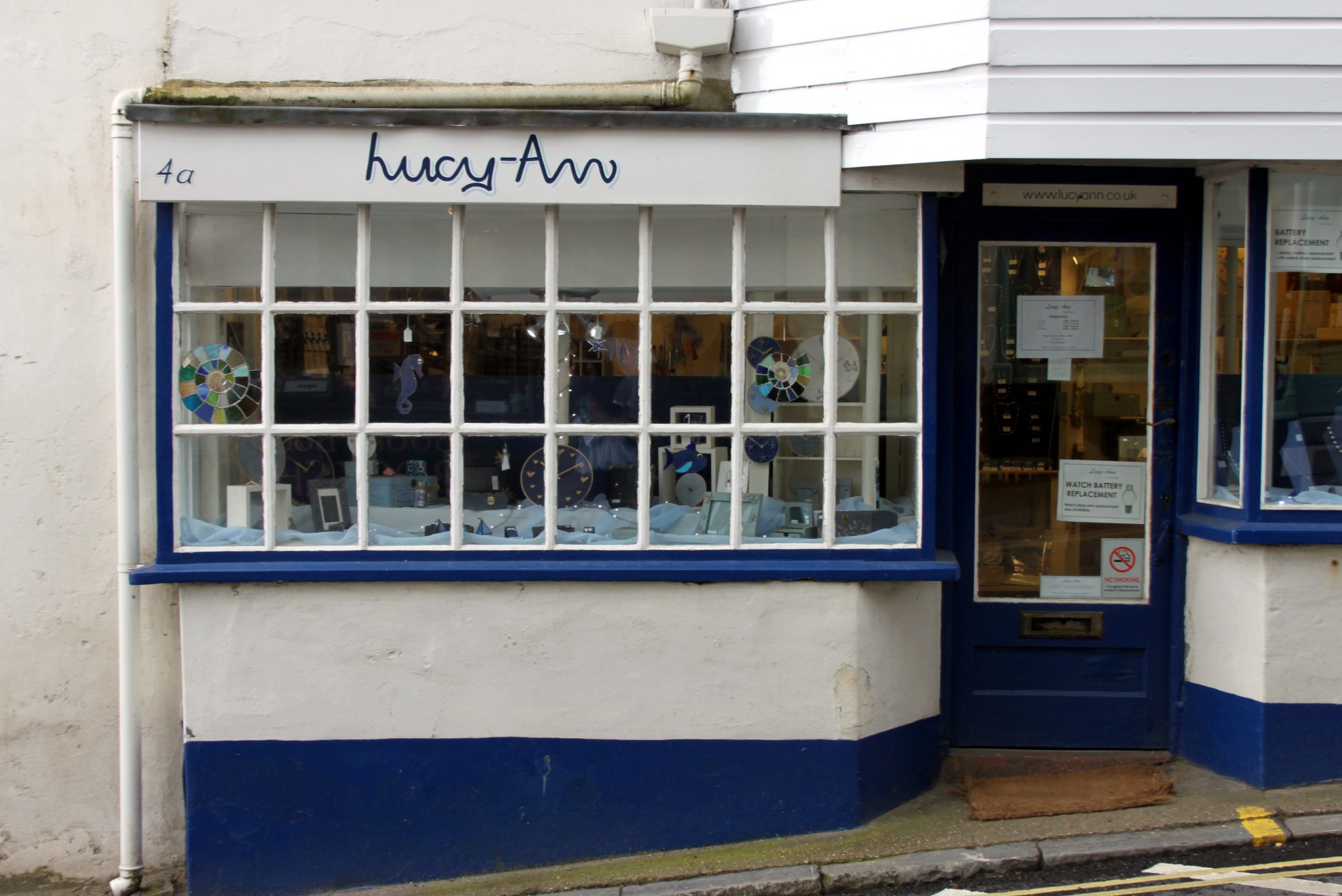 Next came two young lads who, after a lot of persuasions, drove us to Poole. Funnily enough, they had also just come from Exeter, but in a quarter of the time that it had taken us… *sighs*. Once we arrived in Poole we thought we could somehow blag a ferry but turns out Brittany Ferries have dealt with their fair share of Jailbreakers, and although they were keen to donate money to our charities, they wouldn’t allow us on a ferry for free.

3:46 pm brought us our first of three lucky breaks. Tim, a successful looking business and family man, looked absolutely petrified seeing my friend walk towards him. When she asked him where he was heading towards, he said “Oh I’m just heading around the corner so I won’t be able to help you”, which we later realised was a huge lie. Since we were desperate, we asked whether he could just drop us off five minutes away, because as Tesco say, “Every little helps”.

So somehow we ended up in the back of his fancy car sat on his children’s booster seats. When it had been five minutes and we hadn’t been kicked out yet we realised he was heading further than we thought… all the way to South London! Two hours, and plenty of personal stories later, we arrived at some motorway services near Guildford. 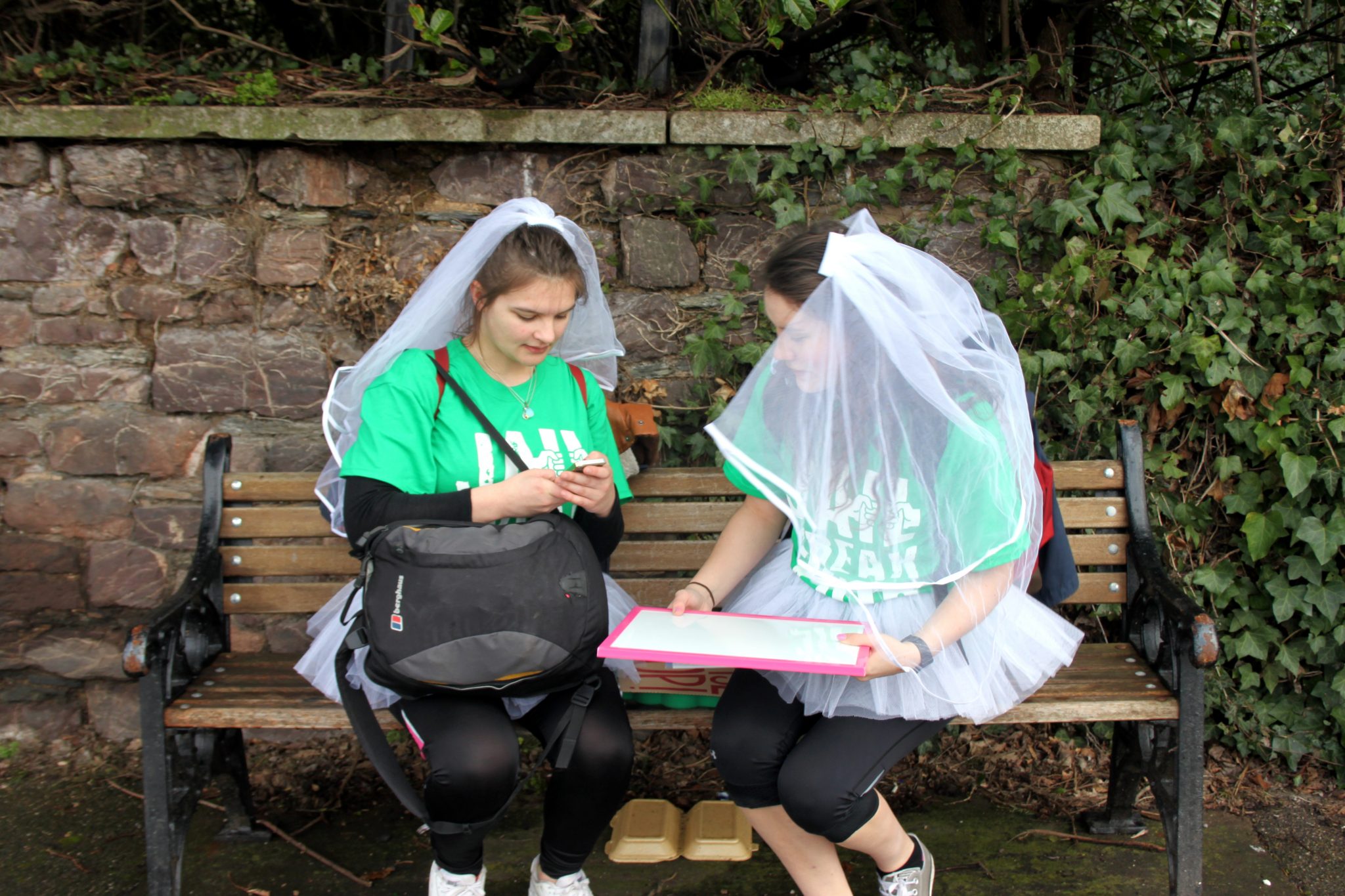 The most memorable anecdote from the weekend was probably jumping into the back of a van, at these motorway services. The guys (who were around our age) drove off down the motorway before we even had time to slide the van door shut. Just a little bit scary! Everything (including us) went flying, but thank goodness we managed to close the door before anything really bad happened. There was no light in the back of the van so we were sitting in the pitch-black praying for our lives, not only because it was probably illegal but because the guy was a terrible driver. Turns out he was FaceTiming down the motorway…

By 8:30 pm we had somehow made it to Folkestone, a port town on the English tunnel in Kent, with hopes of hitchhiking a ride across the Eurotunnel. We hitched with three different drivers from Guildford to Folkestone, including one lovely woman, Isabella, with the most interesting life story. She is a very successful lawyer who got pregnant during her first week (Freshers) of studying at Oxford University, and is married to a South American guy (I forget which country) whom she met across the pond on her “gap yah”. This was one of our favourite parts of Jailbreak: meeting and interacting with people from all walks of life whom we wouldn’t otherwise speak to!

Our luckiest ride came next! Two guys drove us all the way from Folkestone to Amsterdam (270 miles), covering four countries. However, let’s just say this ride was very interesting to say the least and the guys were going to Amsterdam for *ahem* one reason and one reason only… Let’s just say one too many reasons pointed towards the fact that the driver’s “trader” occupation wasn’t quite what you’d expect. One reason being his super flashy car, though I can’t complain – it was pretty comfortable!

Less than 24 hours on the go and no sleep, and we’re on the way to Berlin from Amsterdam 👊🏼🌎 #ExeterJailbreak

At 3:55 am Saturday morning we were dropped off at Amsterdam Central Station. From Amsterdam to Berlin it was one straight road of hitch-hiking, with many European lorry drivers. At this point, despite a complete lack of sleep, hopes were high as we knew we could end up somewhere cool in Europe, bearing in mind that we did not plan out our route at all.

Driving beside the Netherlands’ countryside was so beautiful, passing windmills and tulip fields. The sun was shining and all was swell. One ride we hitched was in a bread lorry with a Dutchman and his two sons who were our age. The soundtrack to my Exeter Jailbreak 2016 video was taken from this ride. The song, a Dutch cover of Johnny Cash’s Ring of Fire, came on the radio and they all sang along in unison.

Another enjoyable hitch was with the sweetest Serbian lorry driver who drove us six hours from the Netherlands to an area close to Berlin. He told us how he loves British culture and showed us by playing current British chart music and watching Mr Bean. We also hitched with a van of creepy Polish guys, which I don’t plan on doing again anytime soon…

By 7 pm, 33 hours after we left Exeter, we finally arrived in Berlin!

36 hours, 850 miles, no money and 17 (dodgy) hitches later, the Runaway Brides made it to Berlin 🇩🇪 One of the scariest, most exhilarating and memorable weekends of my life! Would do it again in a heartbeat 💚 #ExeterJailbreak

Thanks, Exeter Jailbreak 2016. I definitely think a bit of luxury is needed after all that exhilaration and chaos, and that’s where the Algarve’s Vidamar Beach Villa comes in (and believe me, it’s stunning!) This wild travel story is entered into Oliver’s Travels exciting blogger competition to win a holiday in the Algarve *fingers crossed* – enter before it’s too late, guys!

So, what has been your scariest or most exciting travel story? Reveal all in the comments below and we’ll have a lil’ natter!