Budget TravelCity BreaksEuropeFrance
53 years ago
by

Nice is famous for its glamour. The French city is packed with culture: tasty food, beautiful buildings and breathtaking coastal views.

However, it’s also famous for its notoriously high prices.

But don’t you worry, money won’t stop you from having the ultimate Nice experience.

Travelling is all about immersing yourself in other cultures, and in Nice, you can certainly do that without spending a penny!

And it sure can’t stop you from having a good time in one of the most beautiful cities in the world.

So without further ado, here are the best free things to do in Nice that you can’t miss!

This article is written by Faraway Lucy writer, Alice Mason. 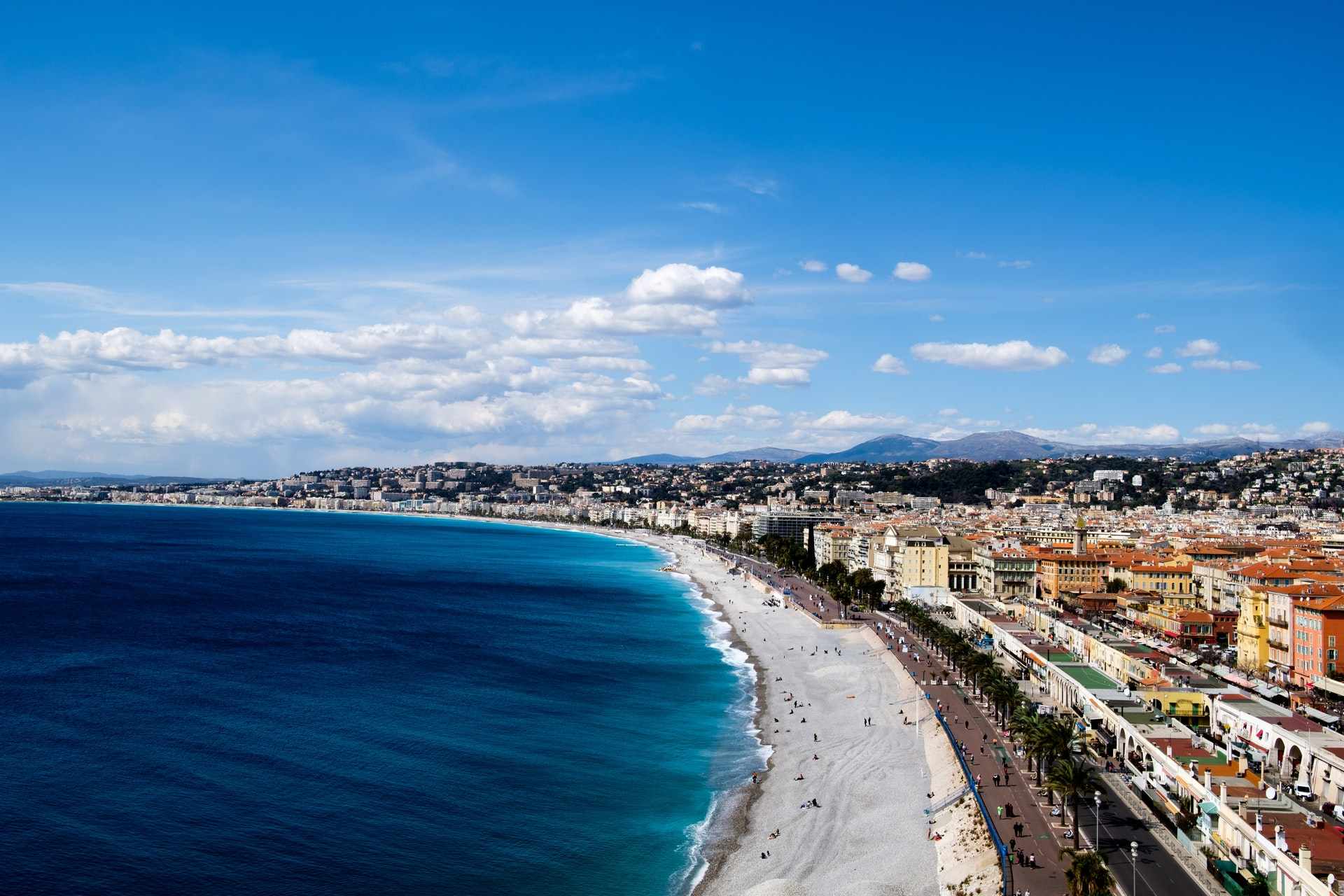 Rising up three hundred feet, Castle Hill makes for a spectacular view over the city and the sea.

From here you can spy the Old Town, the Baie des Anges, and the Cote d’Azur.

Wander through the scenic surroundings as you climb the 213 steps up to the hilltop, or alternatively ascend the hill via train or lift. (Let’s be honest, the lift is looking like an attractive option!)

Top tip: go earlier in the day to avoid the afternoon closing time, which varies during seasons.

Despite its name, the hill contains only ruins of a former castle.

However, the rich history of the castle makes it worth the effort to get up there.

It had been situated there from the eleventh century to the eighteenth century before French troops commandeered it and it was destroyed by Louis XIV’s command in 1706.

The hill contains history-rich cemeteries, which hold aristocratic tombs, and it’s the resting place of many famous people, including Emil Jellinek, Mercedes’ creator.

Make you don’t leave Castle Hill without also immersing yourself in the serenity of the stunning 92-metre high man-made waterfall situated on the hill. 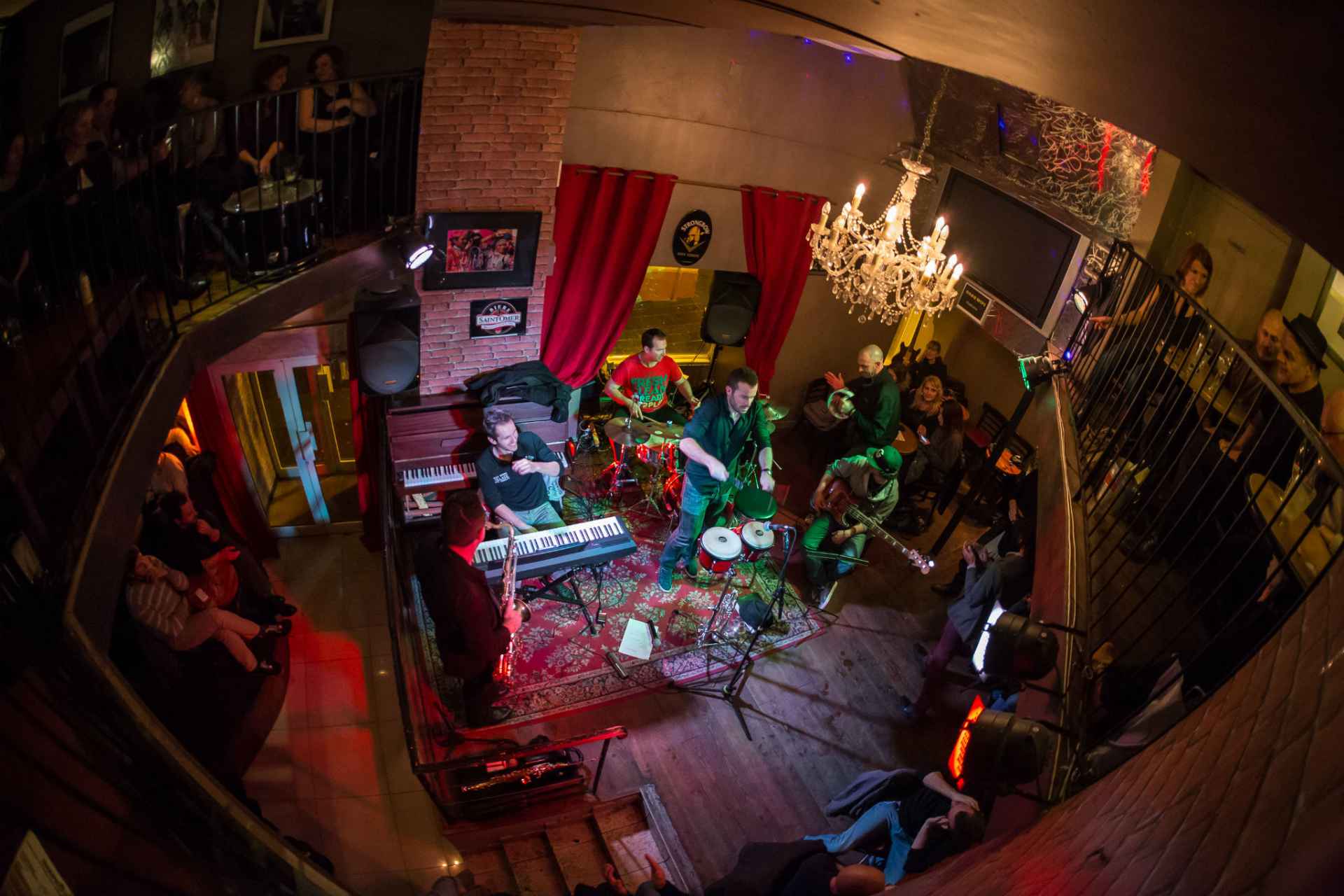 Open from 9 pm to 5 am, Le Shapko is a gem in a city full of diamonds.

While you have to pay for drinks, it’s free to enter, and as one of the best free things to do in Nice, it’s worth a trip just to experience the electric environment and the alternative vibe.

When entering, it’s easy to see why it’s rated the sixth-best bar in Nice. (FYI, there is a total of 63 in the city, so it’s pretty impressive.)

Situated 0.1 miles away from the Old Town, the bar is easy to get to.

Just wander through the narrow, winding streets of Nice to get to this treasure chest of chill.

Soon you’ll be there, revelling in the ambience of an assortment of live music, including Jazz, blues and low-fi hip-hop.

The live music starts at around 10:30 pm so get there before so you’re guaranteed a spot.

Gather around small tables to listen to the plethora of talent on offer at the bar, or dance without a care in the world to the enchanting music.

The décor of the bar is quirky and cosy too, with dark lighting contrasted with a warm ambience. 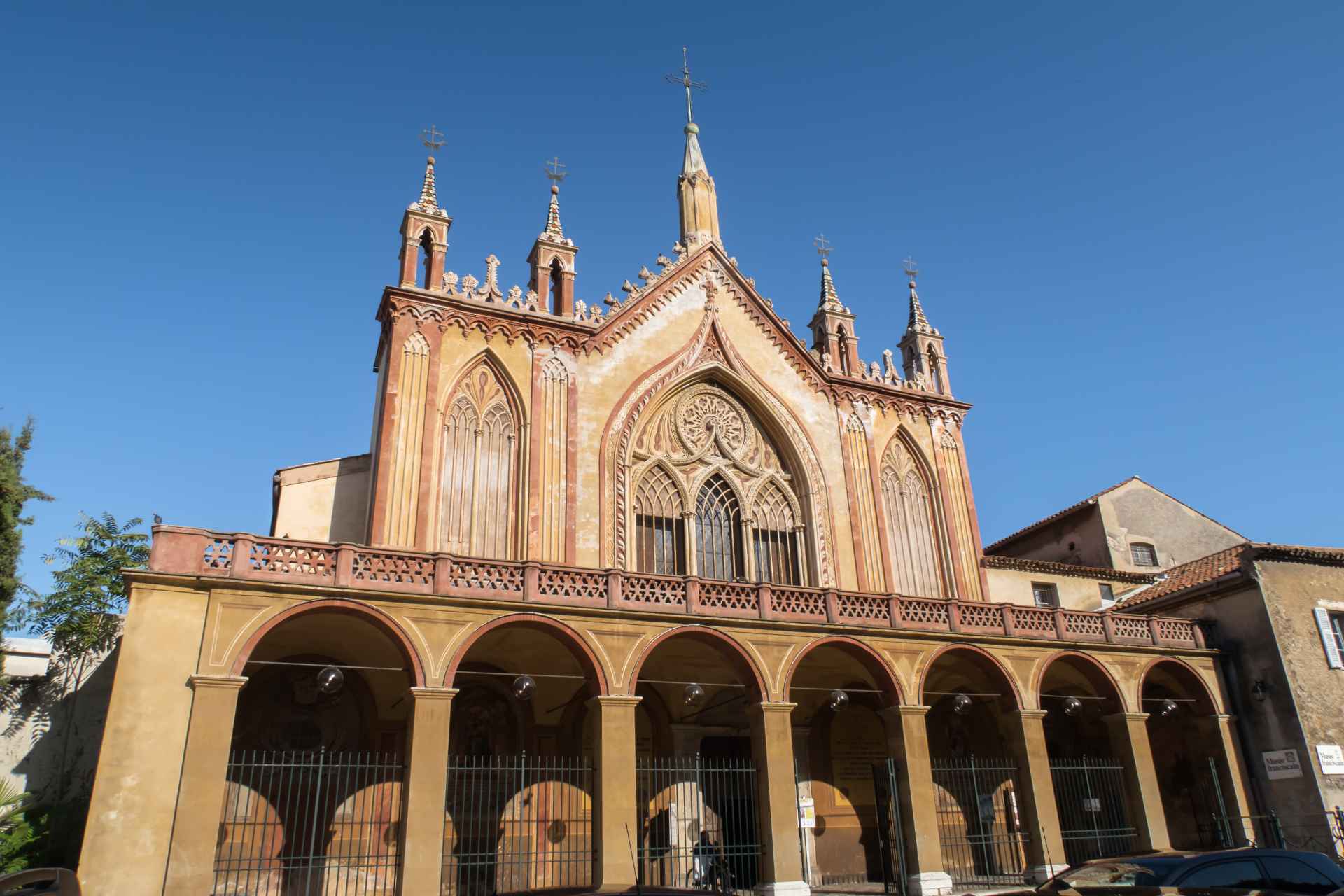 Monastere de Cimiez boasts one of the oldest gardens on the Riviera; it was formerly used as a vegetable garden for monks in 1546.

In the gardens, you can surround yourself with luscious greenery and a simple yet impressive water feature.

Along with climbing roses that are simply delightful, there is an amazing view of the city here which you can take in.

The gardens are around a half-hour walk from the Old Town but worth it as they’re a great place to recharge after a long day exploring.

The garden is food-friendly, so visitors can bring a picnic to tuck into while they absorb the beautiful scenery.

Next to this flower garden, there’s also The Arena Garden of Cimiez, which is full of olive trees. 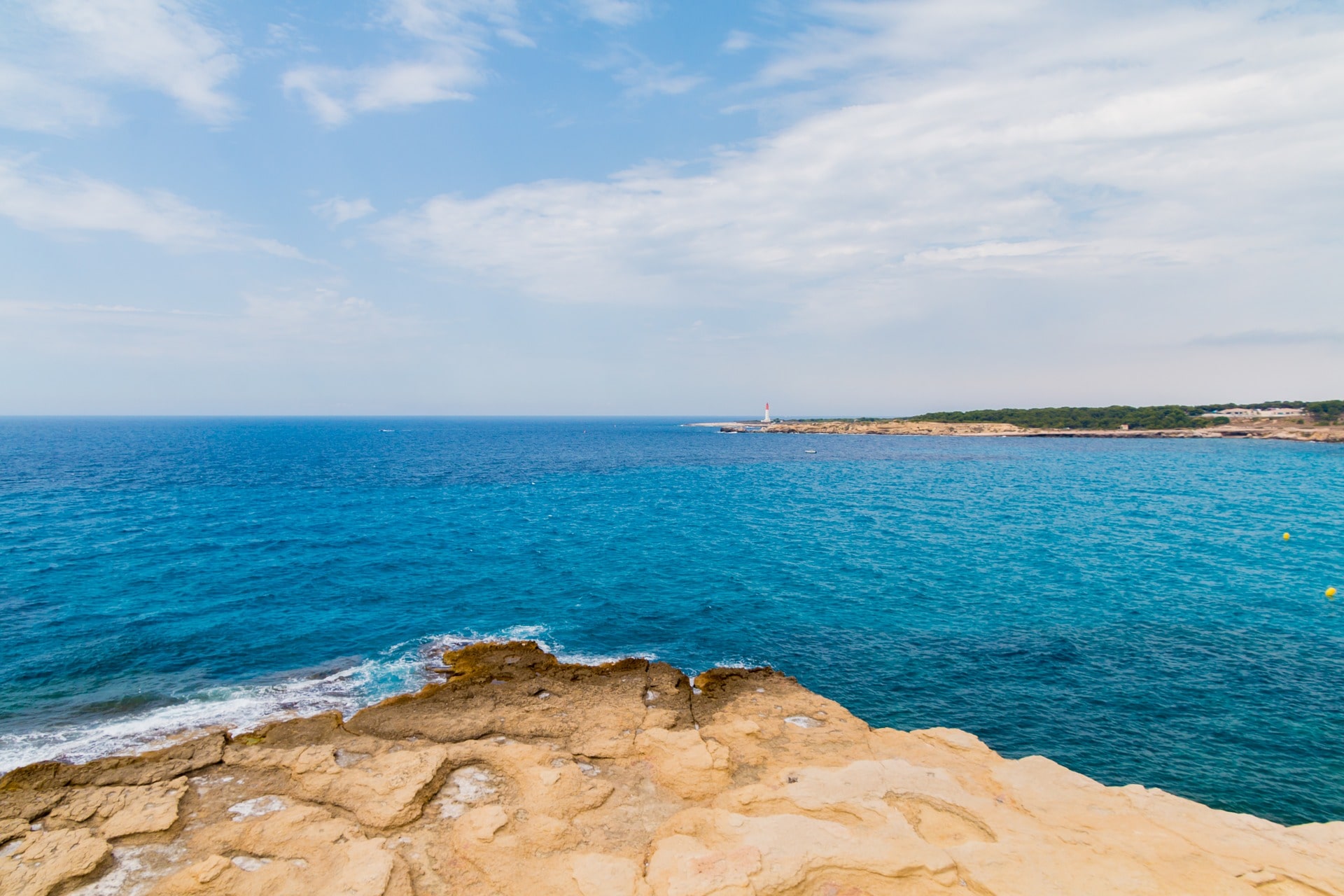 Translating to ‘Coast of Azure’, Cote D’Azur sits between Menton and Cannes in Alpes-Maritimes, overlooking the Mediterranean Sea.

With its luscious beaches and crystal blue water, it spans five hundred and fifty miles and the views are a sight to behold.

The coast is also enriched with a vibrant arts and culture scene well worth investigating. 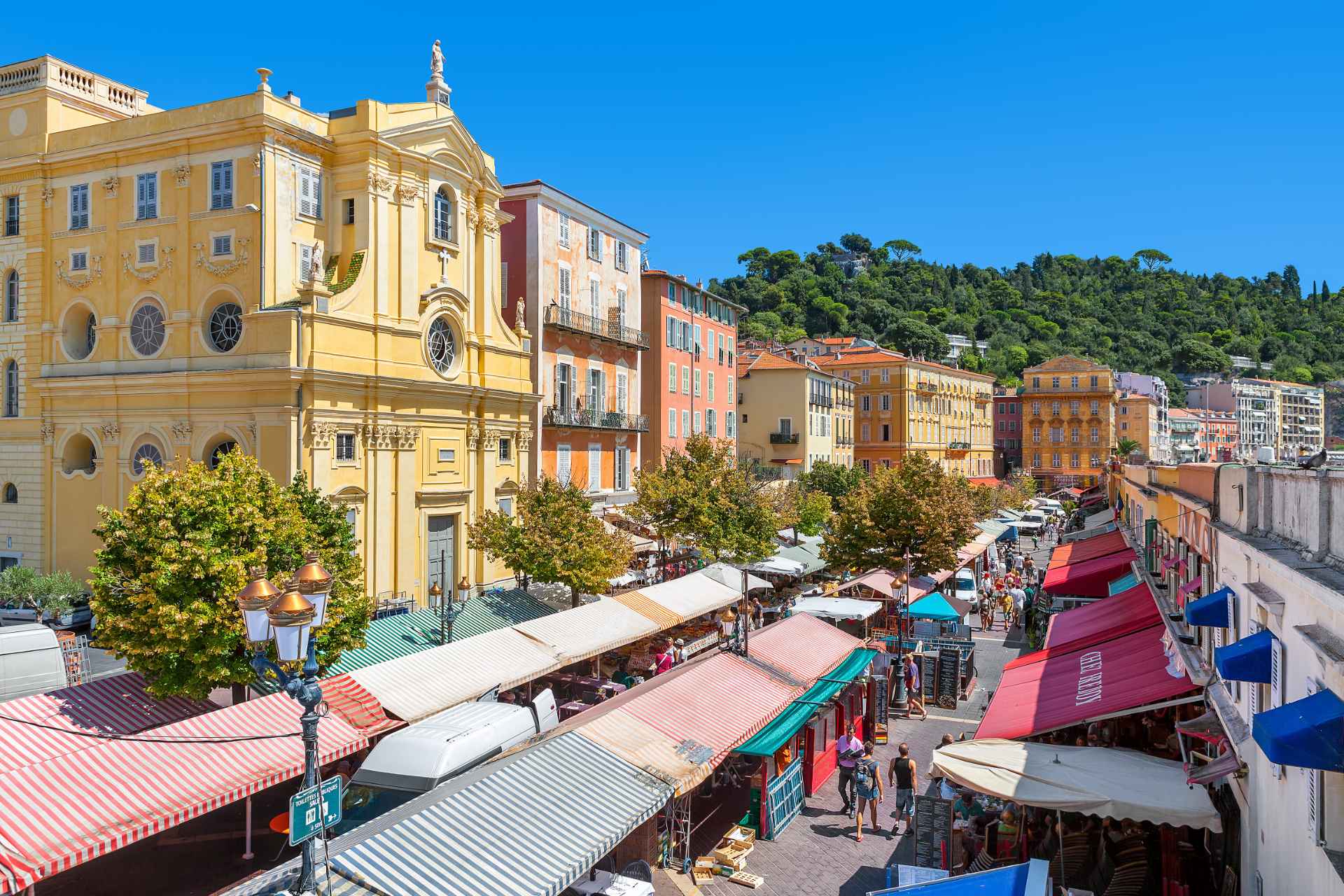 Translating to ‘the flower market’, Marche aux Fleurs has been selling people flowers for over 100 years.

Even now, many years on from its birth in 1897, it’s still one of France’s top flower markets.

As the name suggests, the market is a spectacle of flora, making it an Instagram hotspot.

It’s also a delightful place to taste locally grown fruit and vegetables of every colour, and marvel at the handmade spices, olives, honey and soaps on offer.

Top tip: make sure you bag yourself a free sample of fresh, juicy watermelon along with some top-notch advice from local growers.

Take this opportunity to wander aimlessly through the aisles of flowers and revel in the natural beauty that was largely responsible for the local economy back when it first opened, when flowers would be shipped off to different parts of Europe by train.

The flower market is closed on Mondays and is replaced by an antique market, Marche A La Brocanet.

From June to September in the evening, the pop-up Marche Artisanal Nocturne offers a plethora of delightful crafts up for sale, to remind you of your time in Nice. 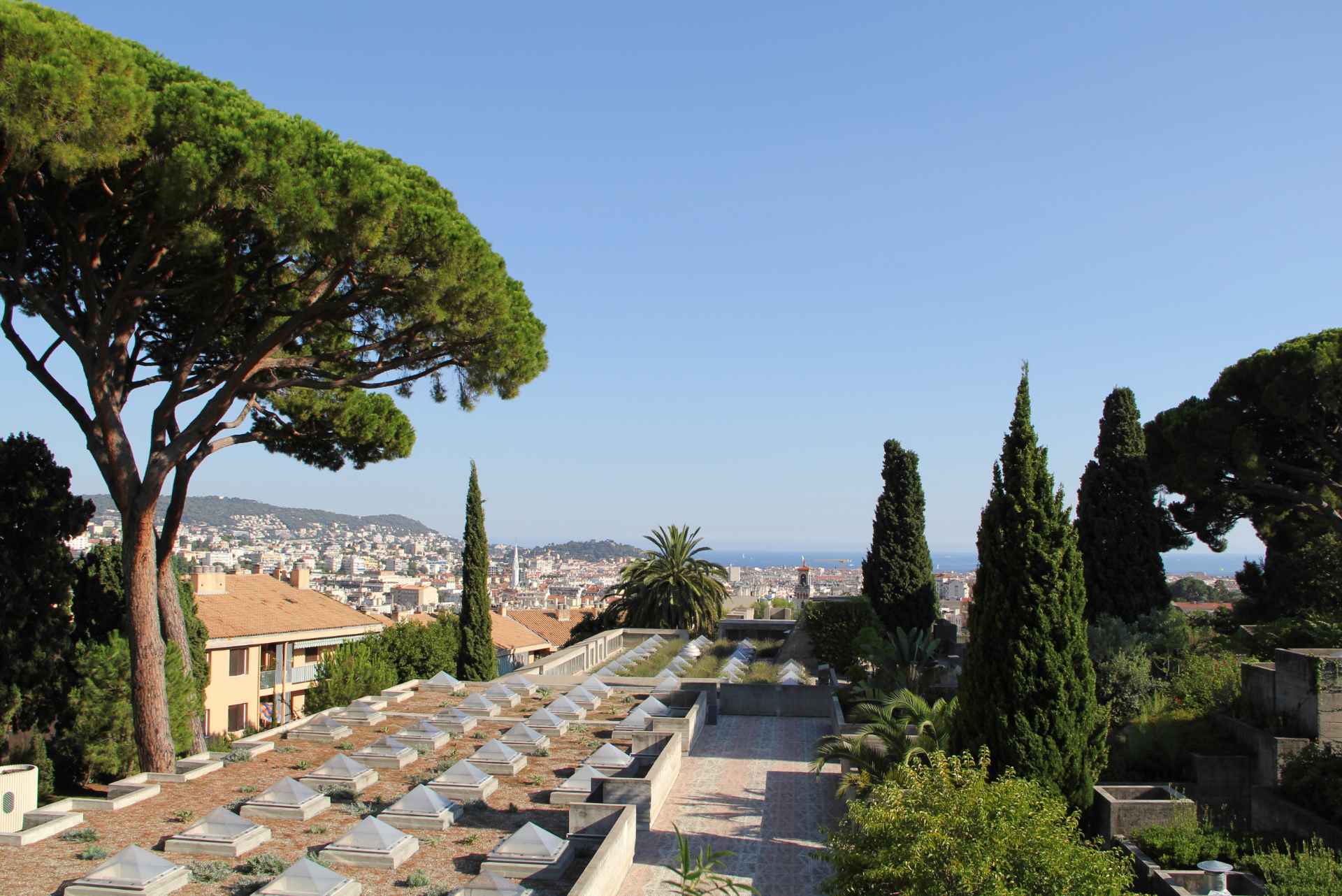 Dedicated to enriching Nice’s cultural form, the Villa Arson Art Gallery is one of three art galleries in Nice.

It’s unique in the way it holds not only a gallery but also an art school, École Nationale Supérieure d’Arts, and a research centre investigating contemporary art.

The gallery also offers a residency program to artists; a three month, all-expenses-paid stay so that they can focus on creating inspiring and beautiful art.

Decorated elegantly with concrete and pebbles, the architecture of the nineteenth-century villa is a sight to behold.

And inside, the story’s much the same. The interior makes use of natural light, which adds to the awe of the place. 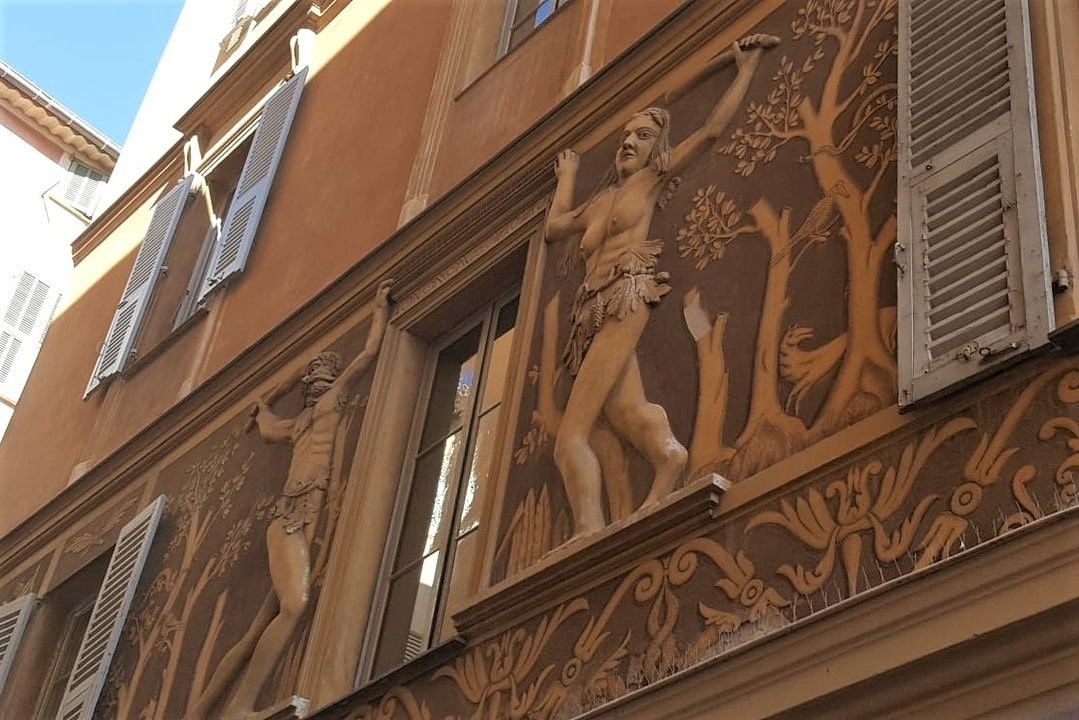 Remember to look up! The Adam and Eve House is proof that taking your time in Nice pays off. When it comes to culture, Nice does not fall short.

Located in Vieux Nice, the famous Adam and Eve House was decorated in the mid-sixteenth century and is situated over two businesses: Chez Felix and Lou Pantai.

Despite being created many centuries ago, Le Maison d’Adam et Eve is still in remarkable condition, with fading of original colour its only flaw.

. The design’s golden intricacies draw the eye into the Christian narrative of Eden, but you’ll also spot several other statues along with the figures of Adam and Eve!

Enjoy the craftsmanship of sculptured lovers, naked bodies, flute players and even a cheeky three-testicled man.

For those wanting to purchase a lasting memory of the building, there’s a shop located directly beneath it selling handcrafted glassware, sculptures and other artworks.

Make sure to go between 2 pm and 7 pm, as this is when the shop is open. 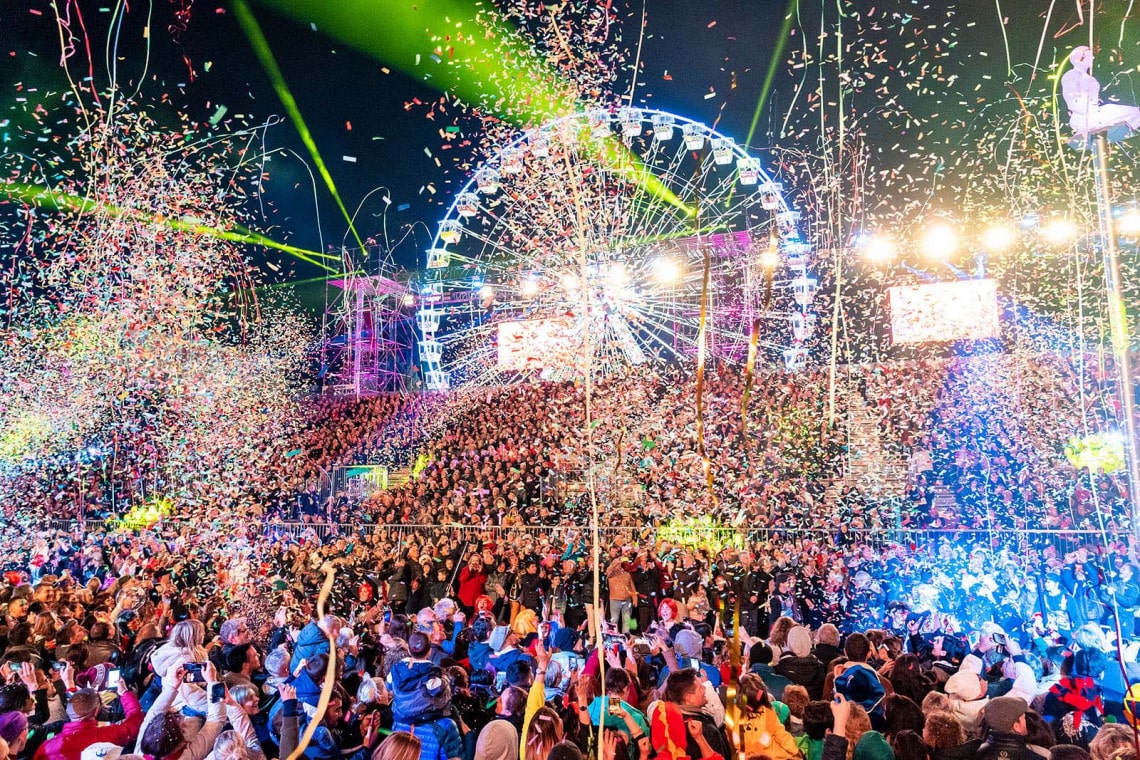 This is one for the winter travellers! Hailed as one of the most prominent carnival events in the world, Nice Carnival is held once a year during February.

But it’s well worth a visit and it’s definitely one of the best free things to do in Nice if you time your trip well.

While parts of the carnival are not free (we’re looking at you, Bataille des Fleurs!), the main opening in Place Massena and firework displays are available to bystanders at no cost.

However, you will have to sacrifice prime viewing spots.

Be a part of the million-strong crowd and see inflatable balloons, dressed up characters, dancers and everything in between stroll up the high street, and relish in the crowd’s electrifying atmosphere.

Even get dressed up yourself if you fancy it!

It’s a time of entertainment, with the Carnastring and Carnacourse dishing out laughs to spectators and participants alike.

The Carnastring involves dipping in the cold February sea, while the Carnacourse will have you witnessing the spectacle of waiters racing one another. 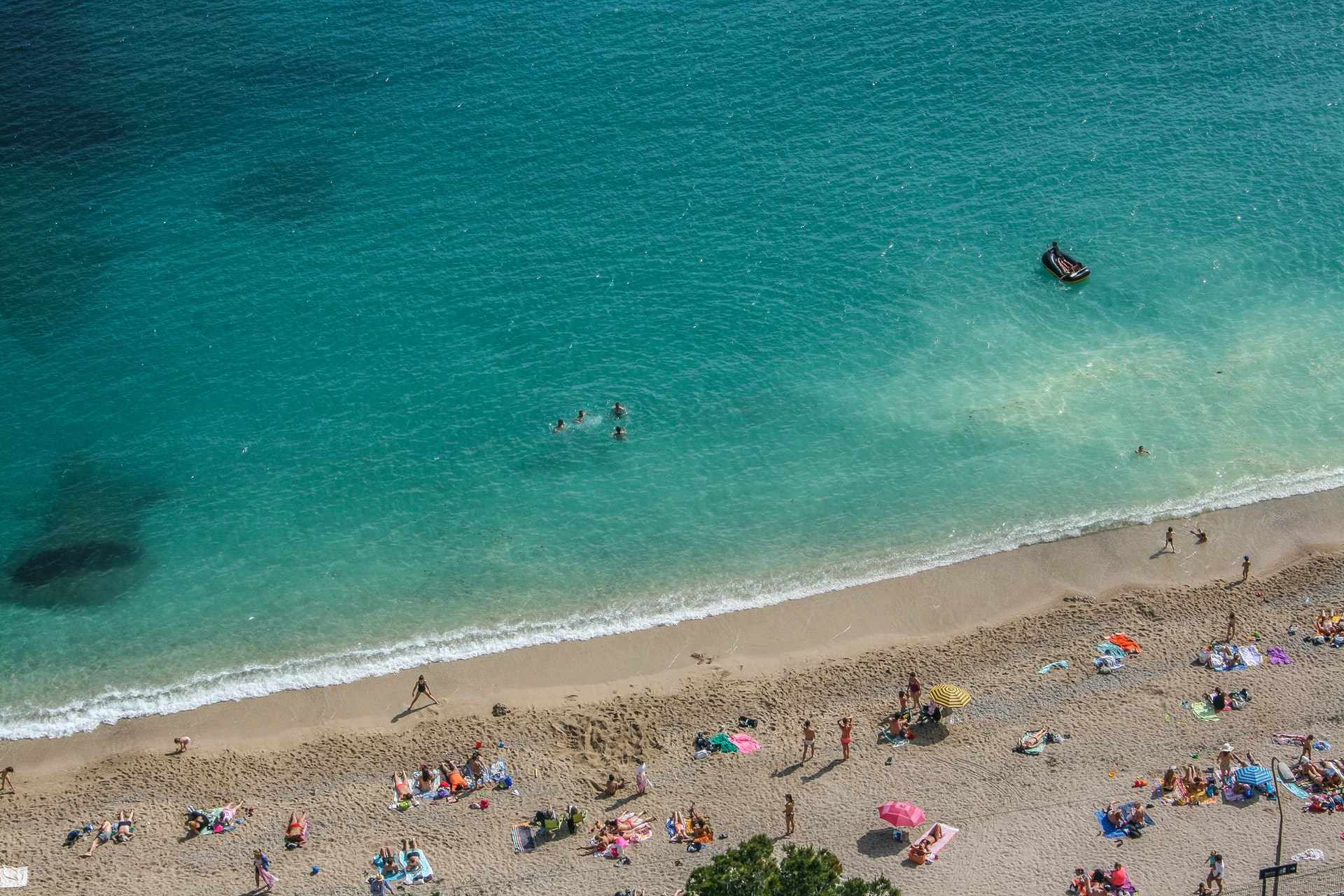 Nice is famous for its clear water and stony beaches.

However, if you really can’t stand the pebbles, there’s a sandy beach on the outskirts of the city.

Jaw-dropping beaches include Coco Beach and the La Reserve close to the centre where you can watch locals jump off the diving board into the water (though this isn’t allowed!).

Bring a picnic, a towel and make sure to get there early as it can get rapidly busy on hotter days.

Watch your feet tread in the water and take in the feeling of being in one of the most beautiful cities in the world.

Buy a snorkel at a local store and see the natural sediment around the rocks, or walk along the Promenade des Angles at sunrise to take in the amazing view. 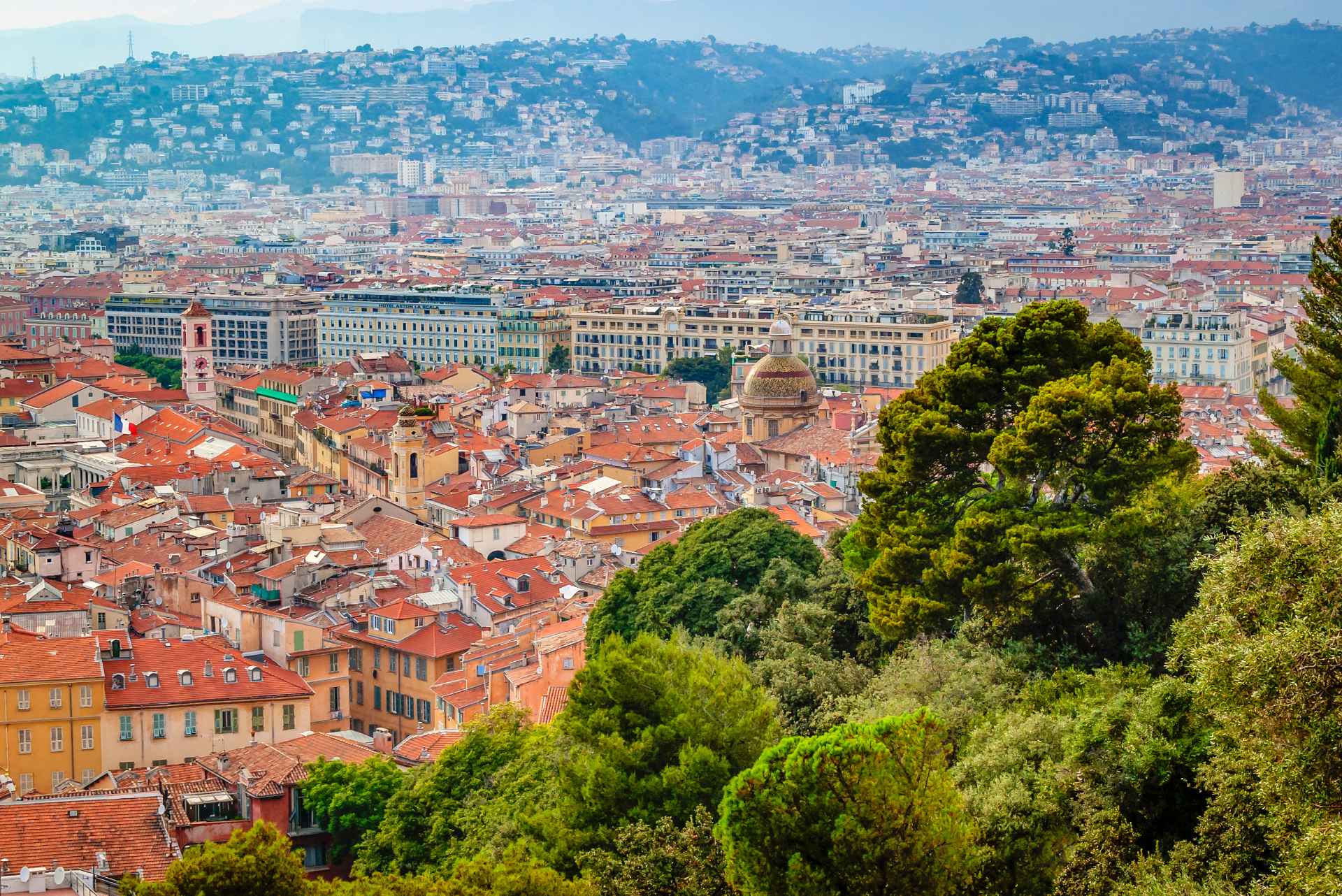 A list of the best free things to do in Nice would be incomplete without name-dropping Parc du Mont Boron.

Indulge in the natural world as you walk one of the different forest paths up the mountain – there are seven miles of them in total!

So, there’s no need to feel guilty for stopping because you’re “just admiring the view”.

We all know that this is code for “exhausted”.

The forest is even home to a castle that was built in the sixteenth century. However, you have to pay to get in.

Hikers can walk around the walls and go up to the front door for free, so you can still get your all-important selfie in front of the castle doors.

Parc du Mont Boron boasts stunning views. On one side there is Nice and on the other there is Villefranche-Sur-Mer.

For those who aren’t fans of walking, there’s a number 14 bus which takes you directly to Mont Boron.

The park does not have any toilets or shops though, so make sure you are well prepared!

So there you have it: the best free things to do in Nice!

Have you done any of these yourself, or are you keen to try them out?

Please let us know in the comments below.

Or if you have any other recommendations for free things to do in Nice, please share those too! 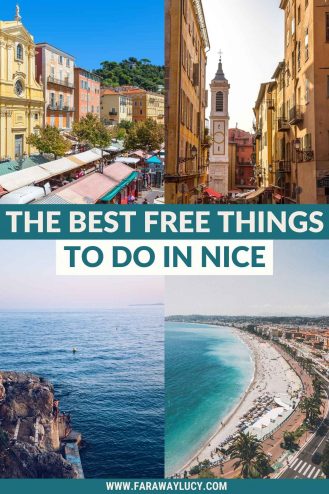 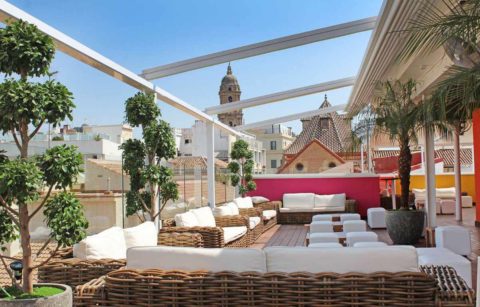 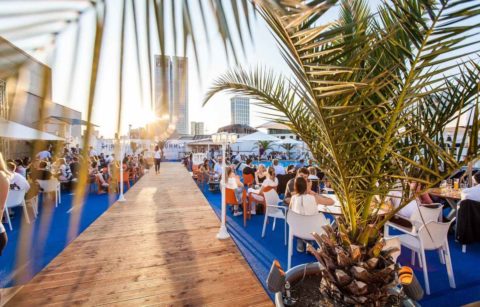 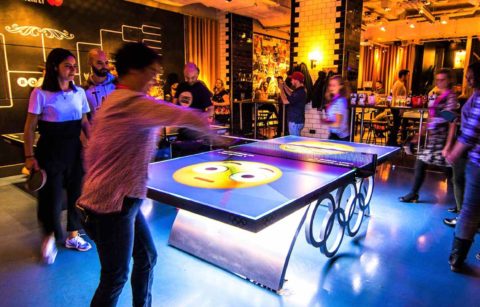