Budget TravelEuropeFranceQuirky Hotels
53 years ago
by
Paris is notoriously known as one of the most expensive cities in the world. And yes, it is very pricey.
There’s no denying that. It’s not exactly the type of place you visit whilst interrailing on a budget.
But there are ways to ‘do’ Paris cheaply. And that’s where budget hotels come in.
If you don’t want to part with too many pennies in Paris, look no further than Hotel Baby Paris, the unofficial definition of cheap and cheerful!
I recently returned from a short city break away to Paris with my boyfriend where we stayed at Hotel Baby Paris for three nights. And for the price, it could not have been a better base for our trip.
Recently renovated, this newly modern 2-star hotel is situated in the heart of Paris, offering well-equipped and stylish rooms.
Read this Hotel Baby Paris Review to discover whether it really is the best budget hotel in Paris…

Our Room at Hotel Baby Paris 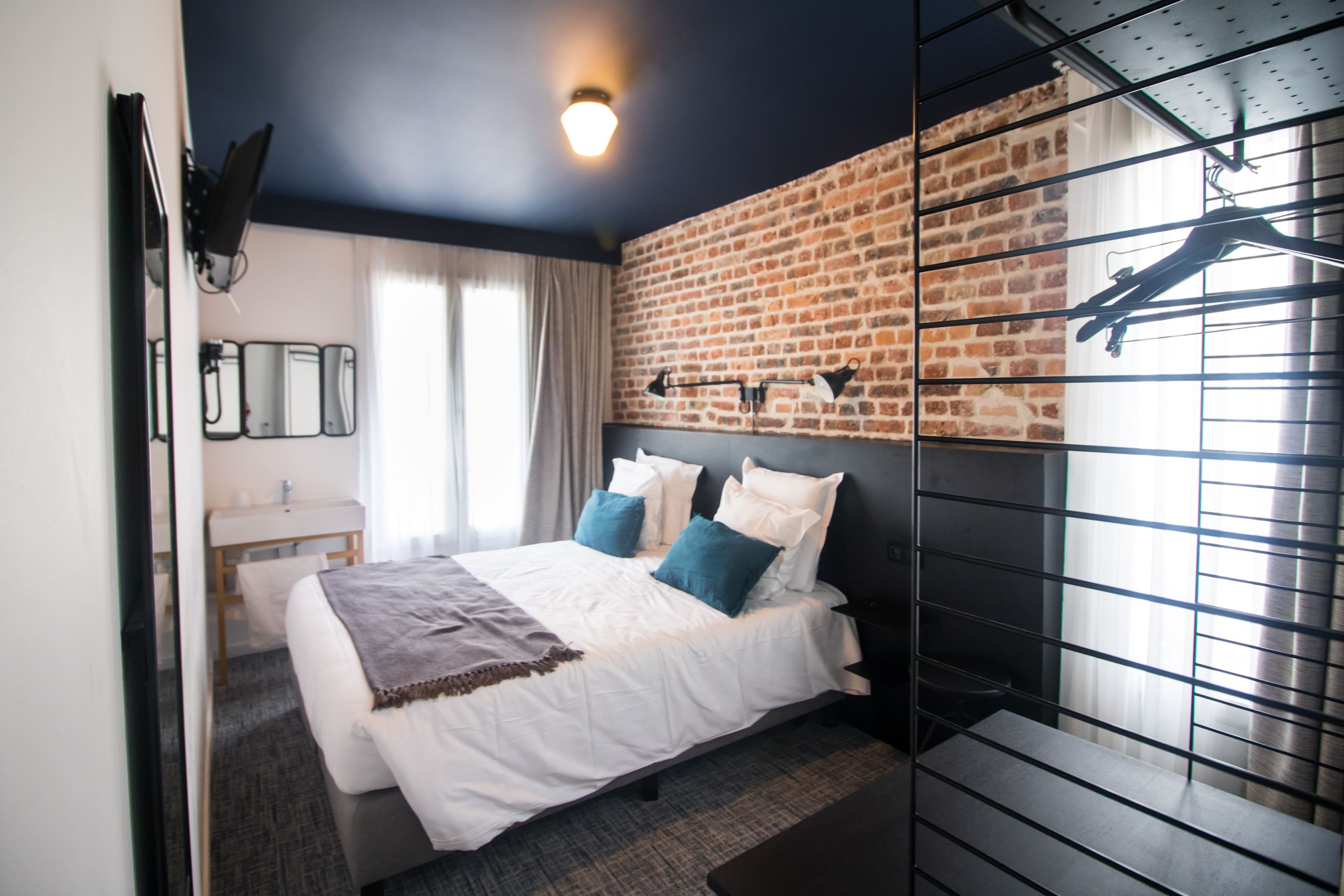 Before I jump into talking about the hotel room, it’s important that I preface this Hotel Baby Paris review by saying that the hotel is not very accessible. By which I mean to say it is crap for accessibility.

This proved absolutely no issue for us because we are able-bodied twenty-somethings, but for the elderly, those with children, or those who live with a disability, this hotel is not for you.

A narrow, steep, spiral staircase takes you up the hotel’s six floors.

And while there is a lift (elevator for the Americans out there) with access from the first floor, it is extremely tiny and claustrophobic.

The hotel staff placed us in room 504 on the fifth floor. This meant we became well-acquainted with our good ol’ friend, the lift.

Gaz and I could only just squeeze into the lift with one backpack between us.

And we are both skinny. That is how small it was.

I have to admit it is a little too close for comfort, even with your partner. This meant we had to go in the lift separately when we had my small cabin suitcase with us. 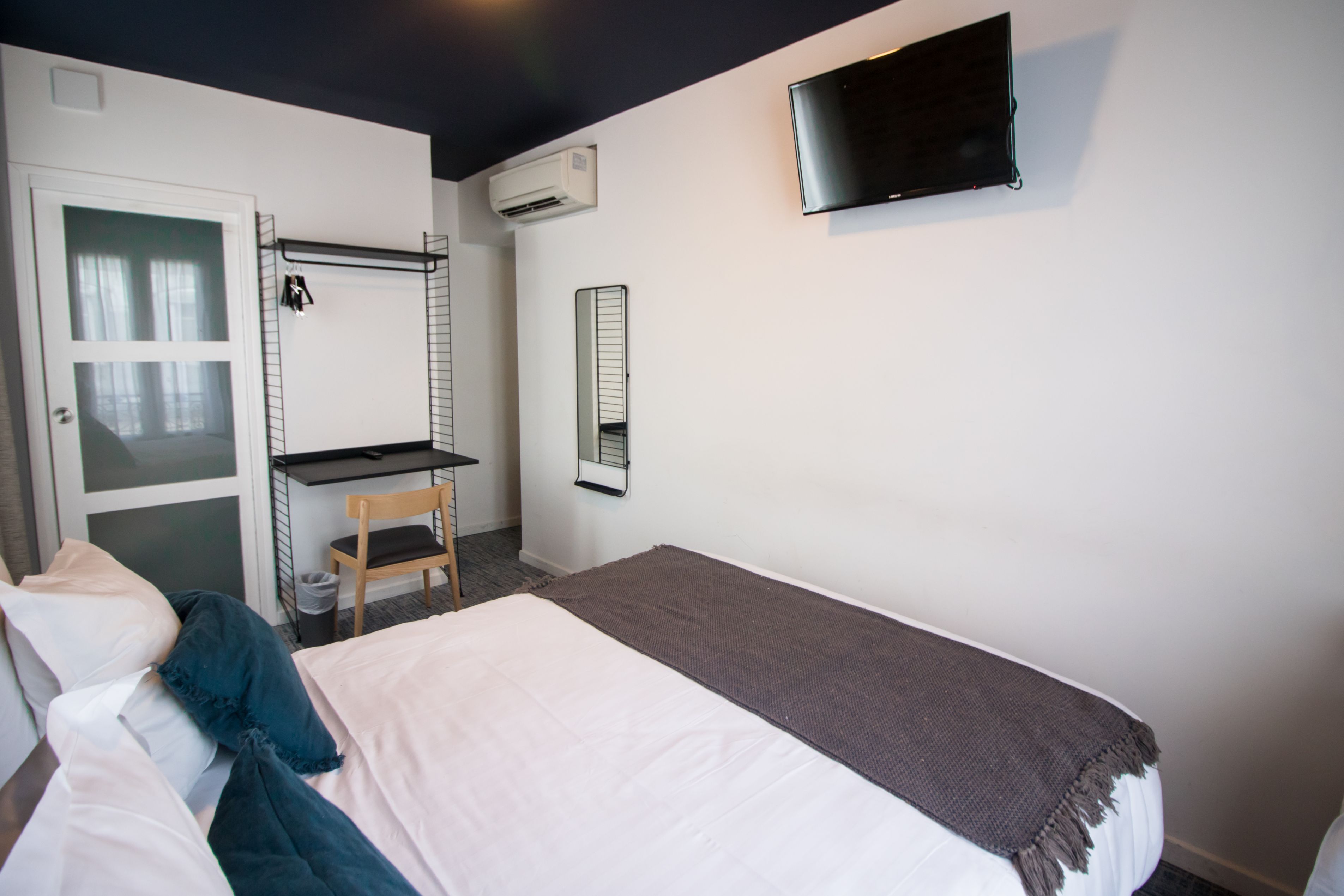 Moving swiftly on to the bedroom, which was a very pleasant surprise!

We expected an extremely tiny room as we booked the cheapest room available (£266 for three nights so £44 each a night, for those wondering).

However, we were welcomed by a room which – although, not huge in size – was not small or cramped either.

While it lacked in the tea and coffee making facilities department, each room at Hotel Baby Paris is equipped with a desk, chair, hanging space, a full-length mirror and a TV.

The TV – a new addition along with the rest of the renovation – was much larger than the images online suggested.

Not that we had time to watch telly. I mean, neither can we understand French but here we are.

All of the rooms come with air-conditioning and free Wi-Fi access too. 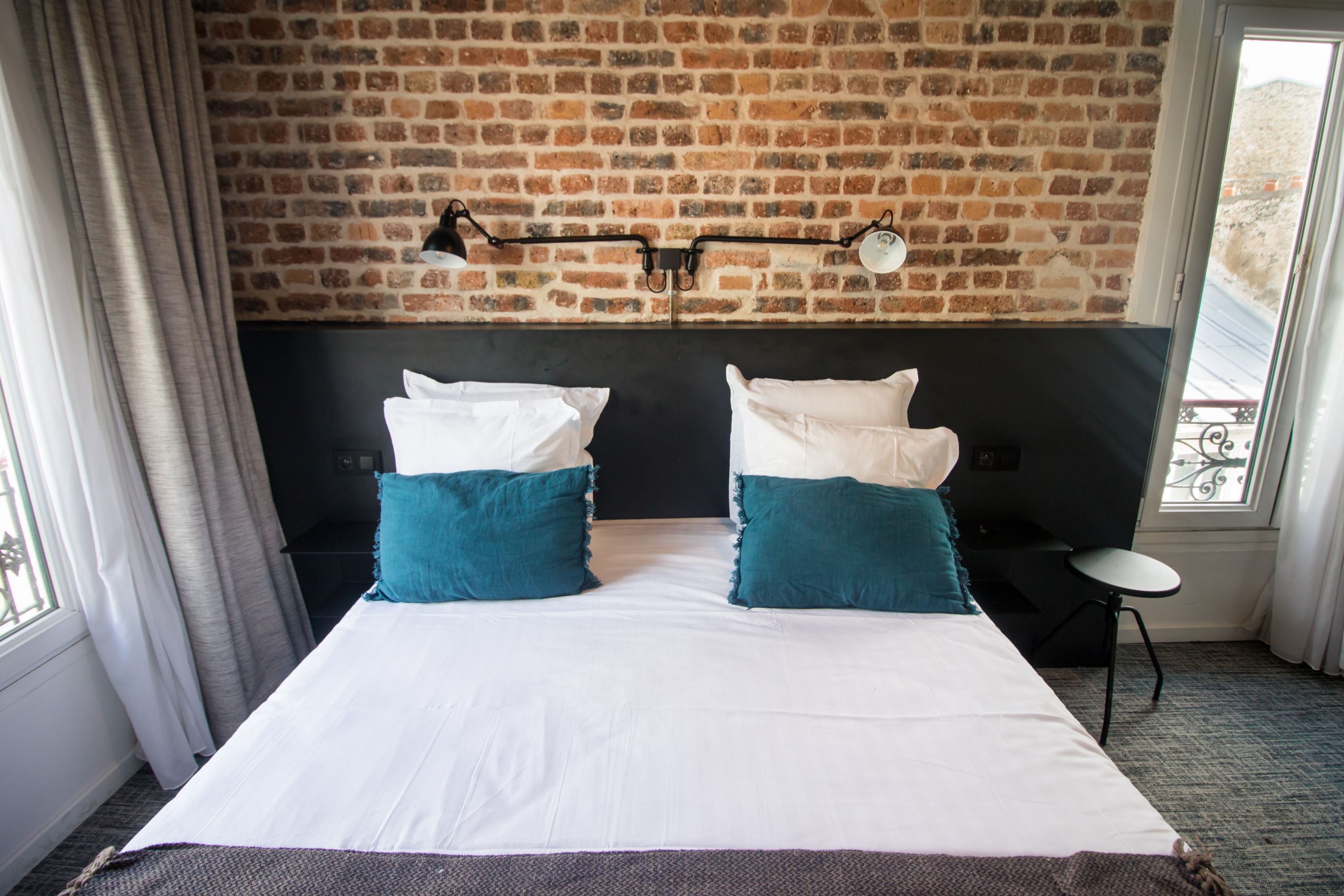 I have nothing but good things to say about the bed. It was huge and ever-so-comfy with big thick pillows, meaning you’ll sleep soundly.

A good night’s sleep at Hotel Baby Paris is aided by very thick curtains which really block out the light.

However, if you’re keen for a long day’s exploring and want to wake up naturally with the sun, be sure to throw the curtains open!

Downsides of the bedroom

I only have a couple of gripes with the room.

It wasn’t that much of a nuisance but if you are looking for absolute peace and quiet, Hotel Baby Paris probably isn’t the hotel for you.

Then again, what do you expect from a 2-star hotel?

Secondly, the overbed light and charging point on the left side of the room weren’t working.

We didn’t care too much about the light but this meant there was only a single working charging point in the room! 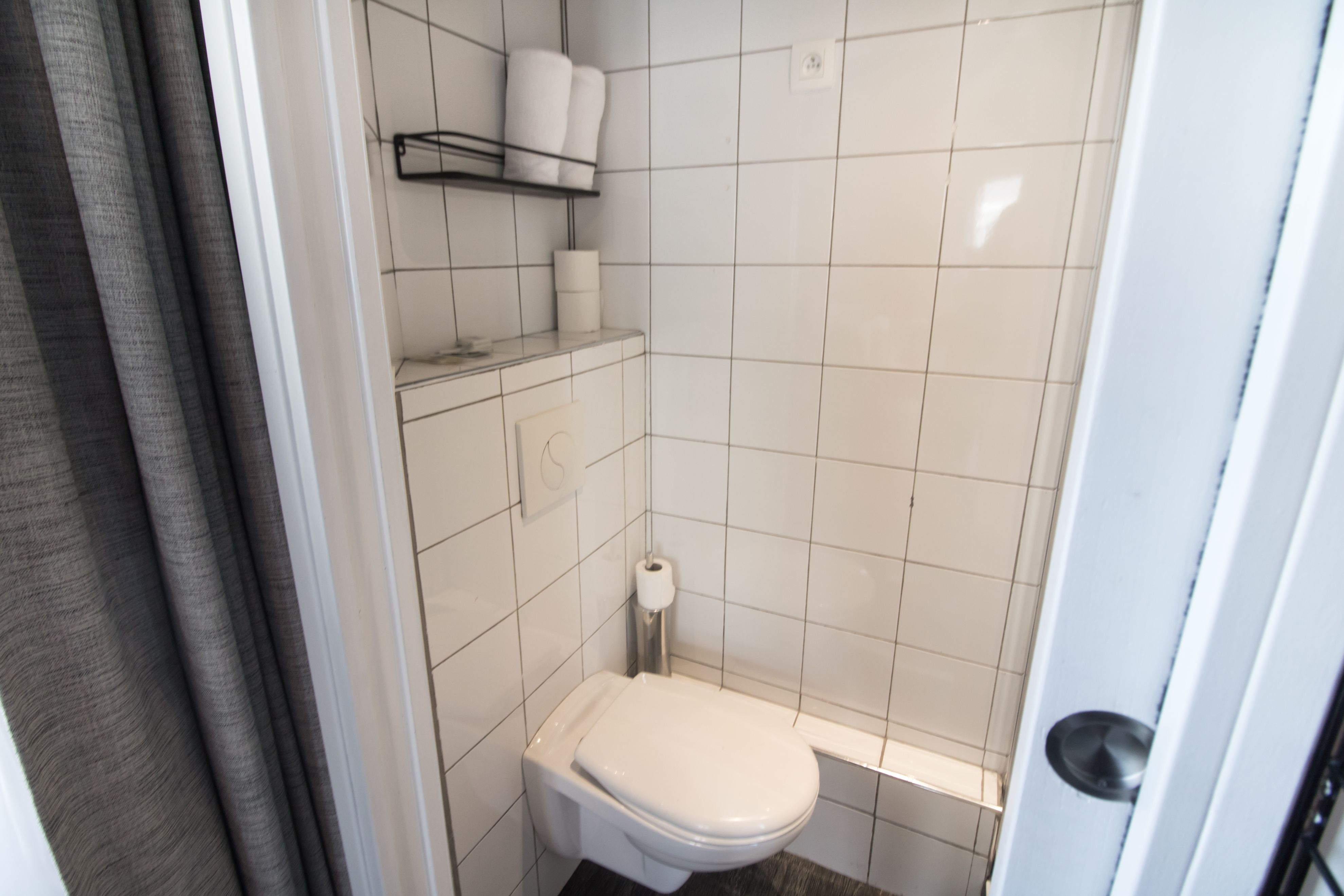 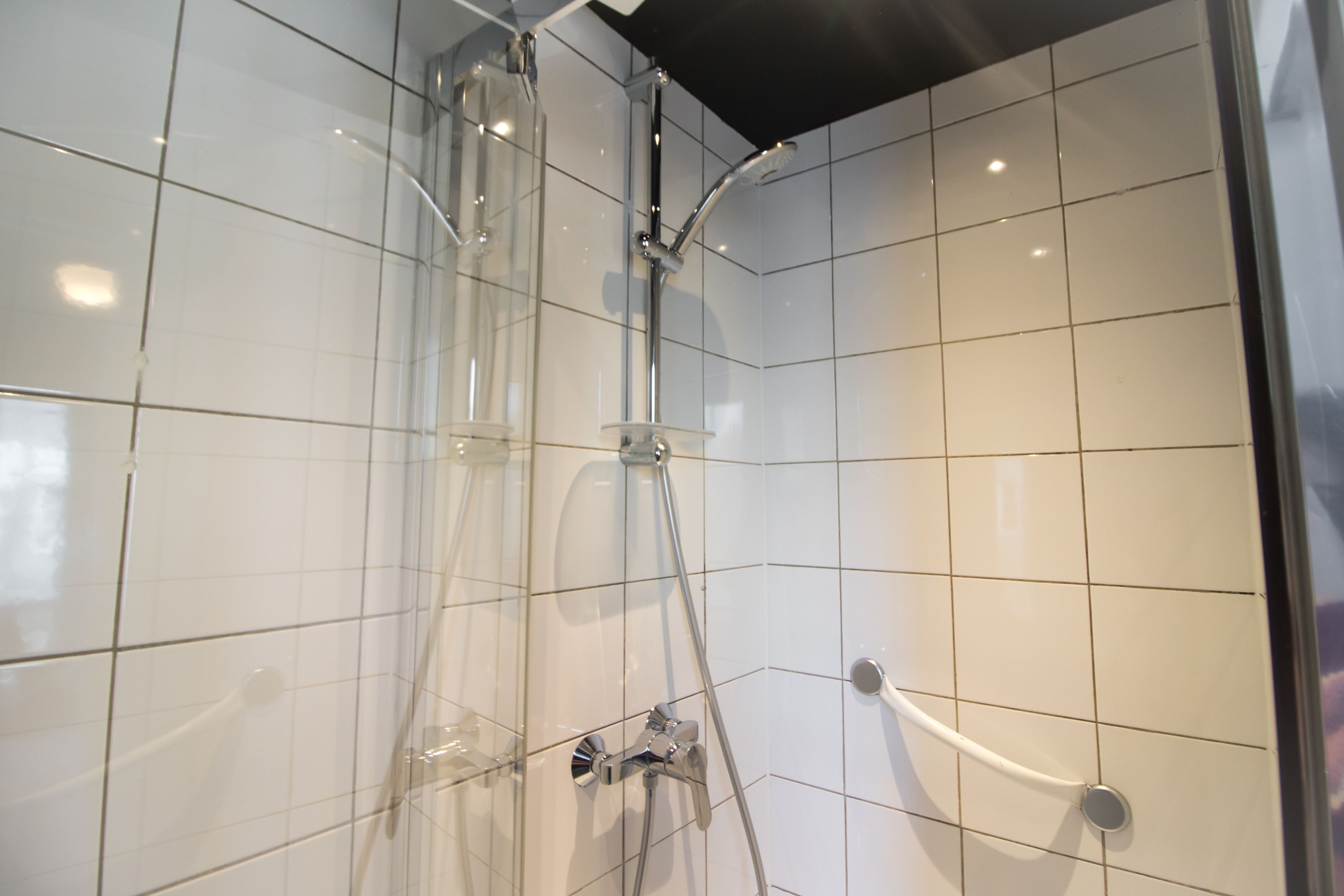 Well, it was less of an ensuite and more of a cupboard. But that worked well for us as we didn’t need a large, luxurious separate bathroom.

Along with a toilet and shower, the ensuite comes complete with a spare toilet roll, a couple of clean towels and small soap and shampoo samples.

The shower is really hot and strong so it got a big thumbs up from me!

In Hotel Baby Paris‘ cheaper rooms, likes ours, you will find a separate basin, mirror and hairdryer in the bedroom. 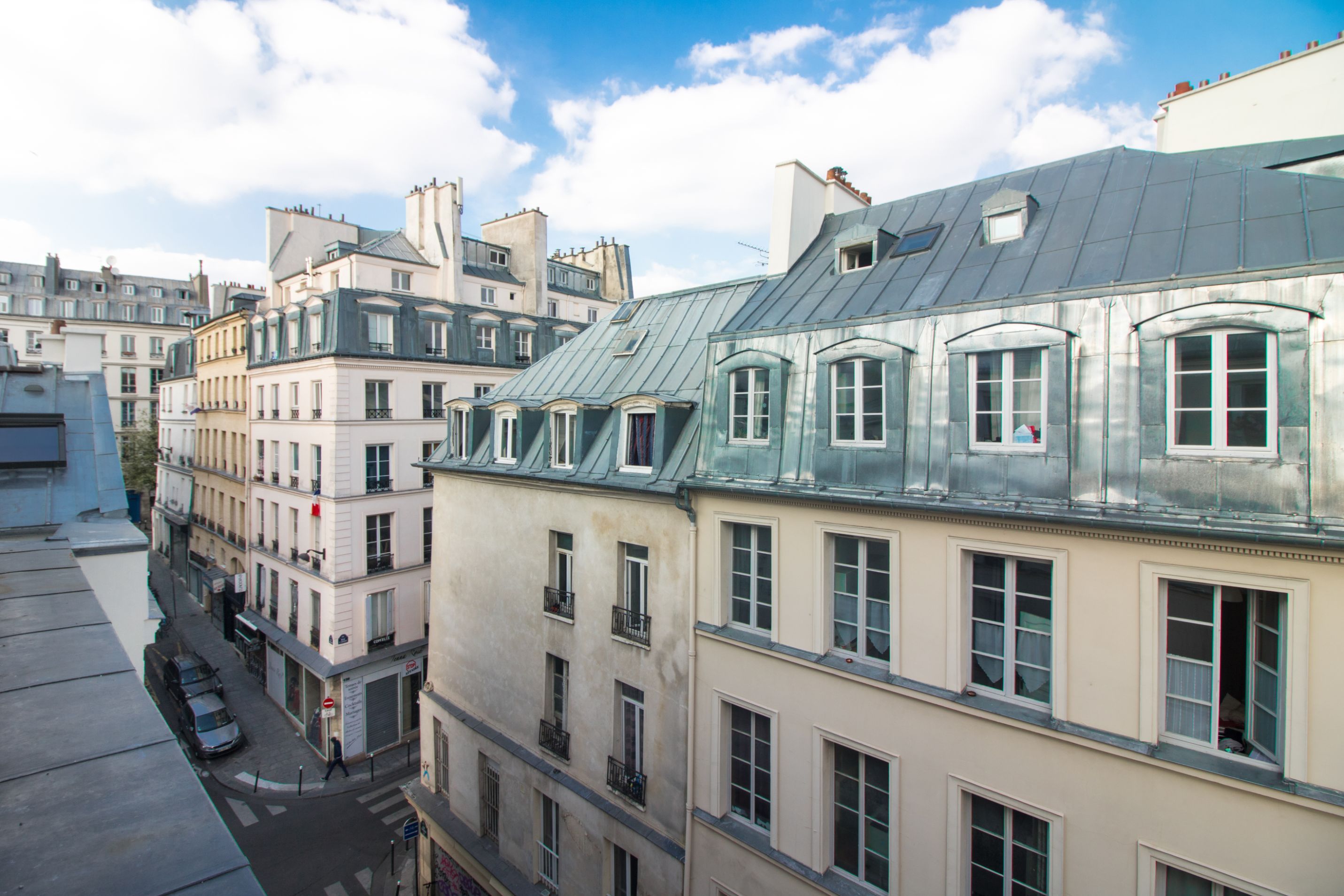 A gorgeous Juliet balcony opens up to some quintessential Parisian views of neighbouring buildings that will make you want you to grab a baguette, a beret, and other stereotypical French items, and head to the streets!

The lobby of Hotel Baby Paris 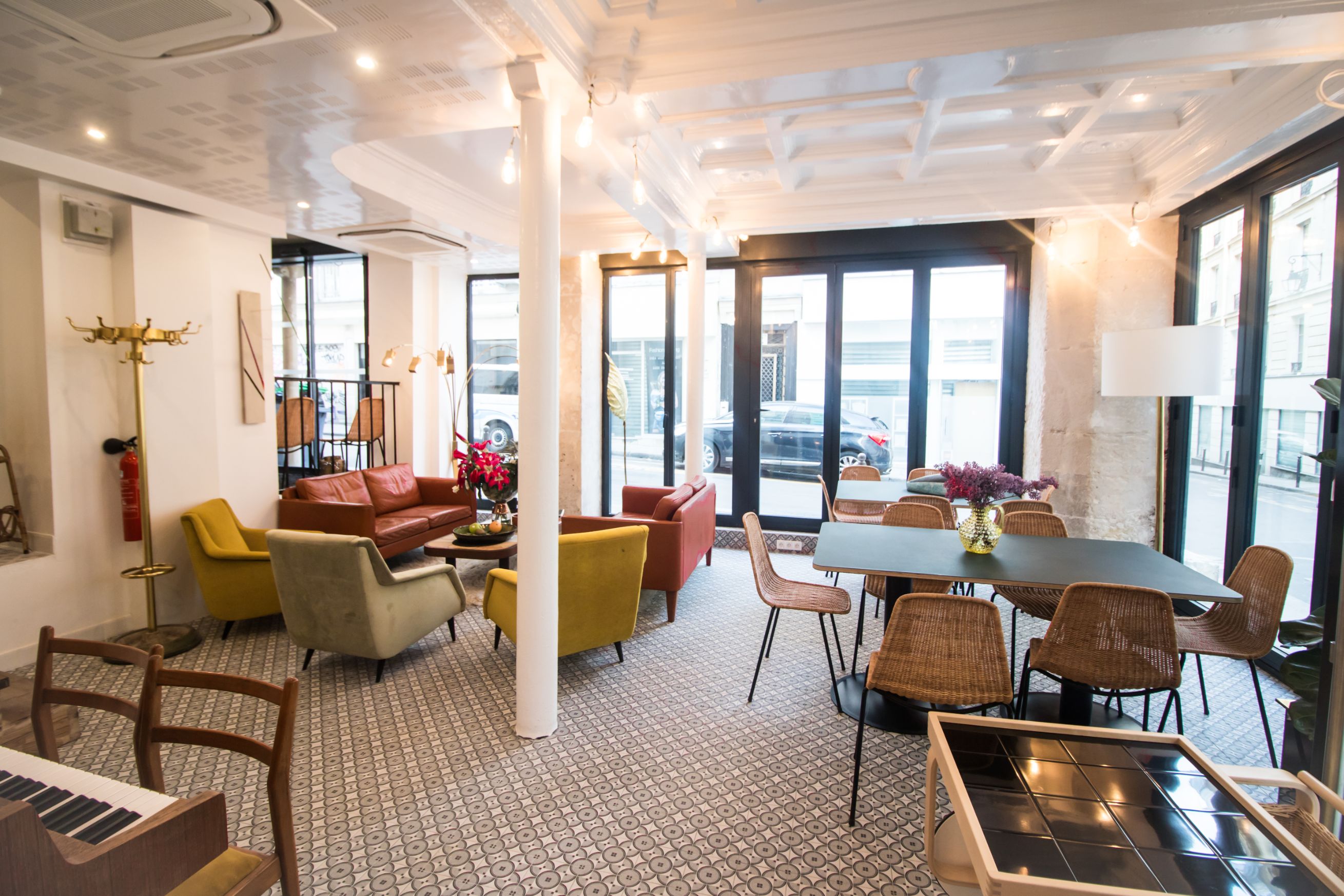 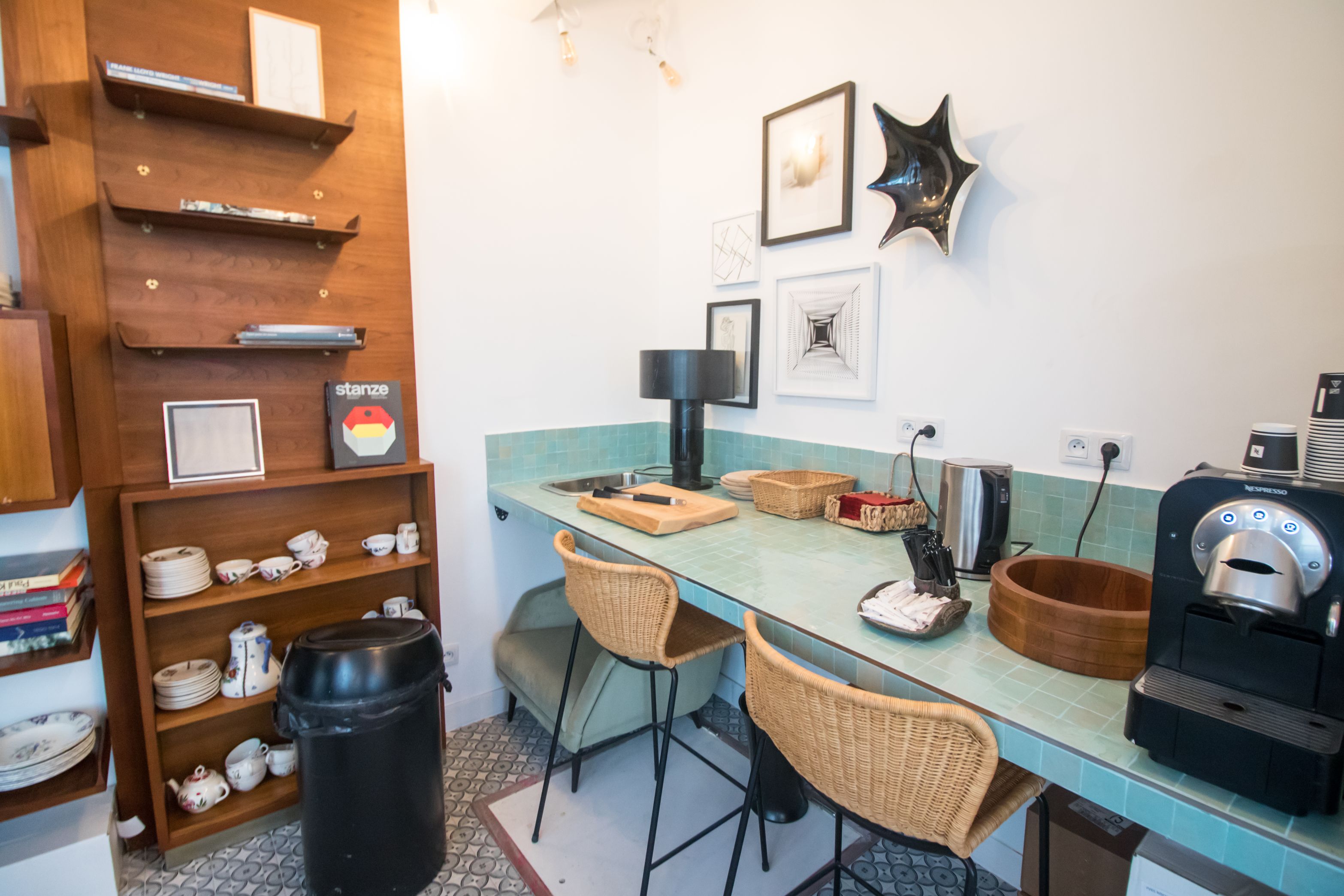 As you enter Hotel Baby Paris, you will find a modern and spacious lobby and breakfast area, perfect for socialising on slow mornings with a coffee and croissant in hand.

All of the hotel staff were super friendly and always on hand to help.

The hotel has a 24-hour front desk and a hotel policy whereby you have to leave your room keys at the desk each time you leave the hotel.

I presume this is because they don’t want people losing or cutting their keys!

The Location of Hotel Baby Paris 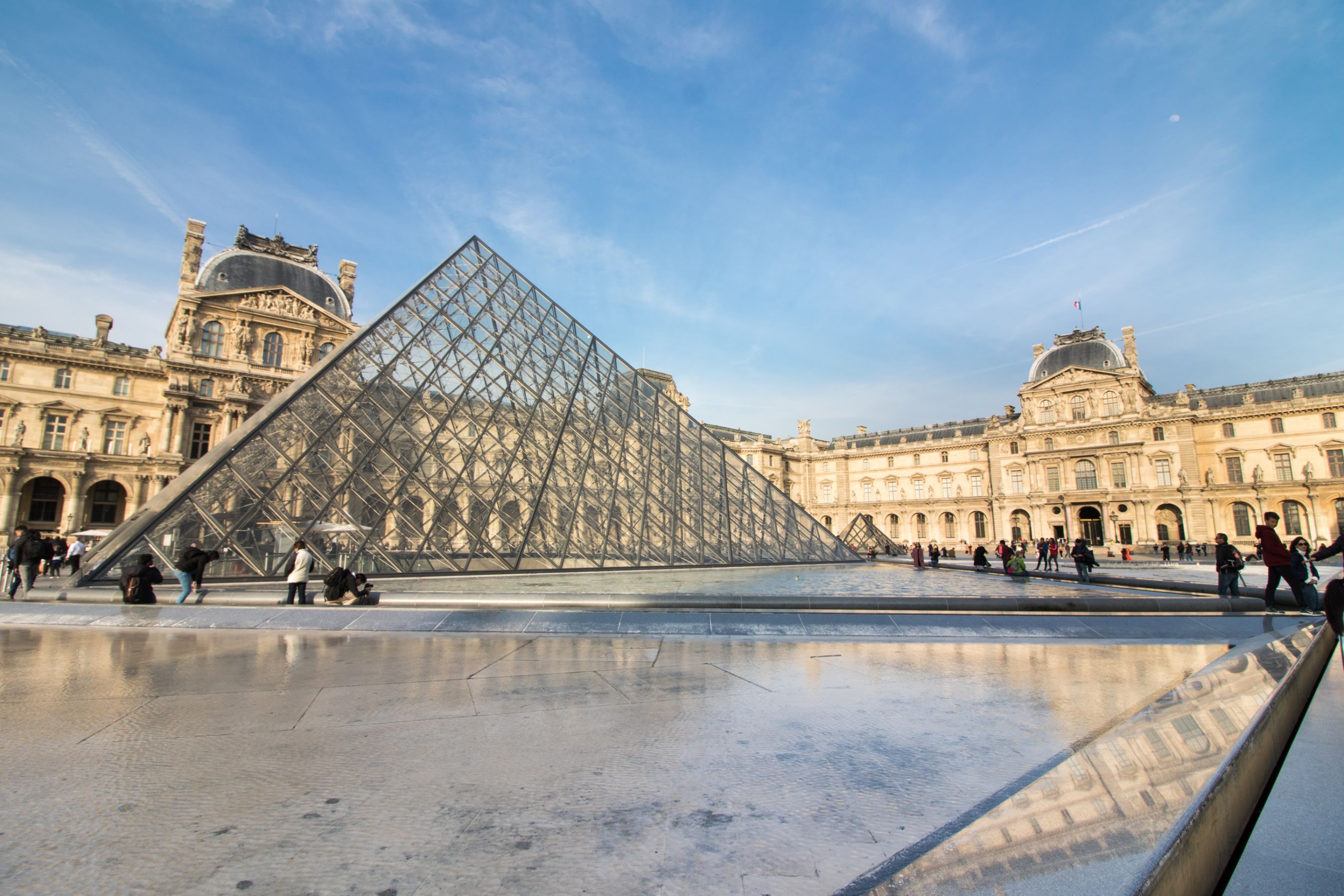 Despite all the many great things about the hotel, perhaps its greatest asset is its location.

Perched in the east of the eclectic 2nd arrondissement, Hotel Baby Paris is surrounded by a plethora of shops, bars, restaurants and theatres.

However, it’s certainly not noisy either! Despite occasionally hearing running water and chatter from neighbouring rooms, the hotel is tucked down a very quiet and peaceful street so you will hear no noise from outside.

The 2nd arrondissement is very central, making many parts of Paris easily accessible by foot.

For example, the hotel is within easy walking distance of the Louvre and Île de la Cité.

As expected from a large city, most trips to the City of Lights come hand in hand with a fair share of walking.

Therefore, the best bit about staying at Hotel Baby Paris is that is a one minute walk from Strasbourg Saint-Denis metro station.

This makes it super easy to get anywhere in the city quickly and cheaply. Sounds like the best budget hotel in Paris to me!

Thanks for reading this Hotel Baby Paris Review, I hope it was useful!

Are you planning a trip to Paris? If you have any other questions about your trip, please ask away in the comments below!

I can wholeheartedly recommend Hotel Baby Paris as the best budget hotel in Paris.

In fact, I might even have to book another stay there in the future… Any excuse to visit France, eh? 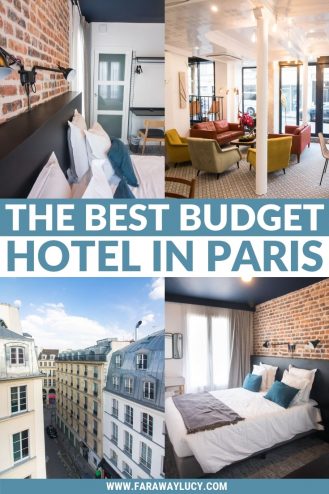 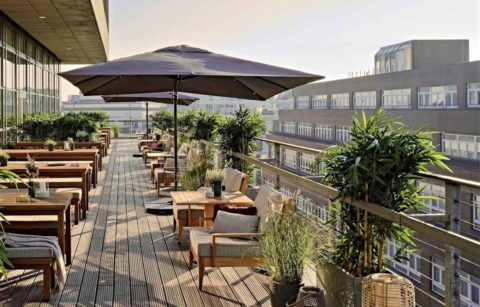 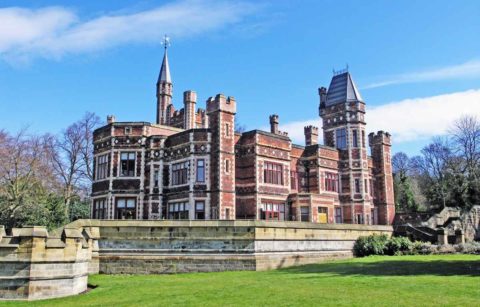 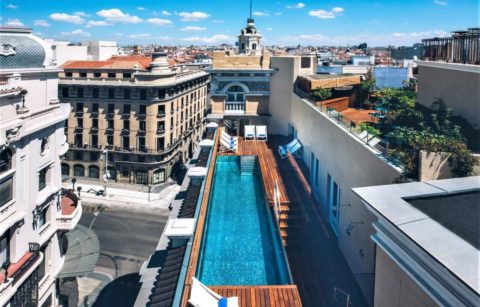