One Day in Bratislava Itinerary: The Best Way to See Bratislava [2023]

I did not expect to fall in love with Bratislava.

It’s not a European hotspot like Paris or Barcelona, but its small-town charm did not fail to impress me.

If you’re like me and didn’t really know much about the city, Bratislava is the capital of Slovakia.

It lies on the River Danube, within easy reach of the borders with Austria and Hungary.

So let me show you the best way to spend one day in Bratislava, as you pass through the city while interrailing on a budget…

Is One Day in Bratislava Enough?

So why visit Bratislava? Is it worth it if I only have a day to explore the city?

The short answer is yes, absolutely!

In fact, the city is so tiny that you don’t even really need more than one day in Bratislava.

It’s definitely of the most underrated cities in Europe for a shorter stay.

However, you could also easily stay in the city for longer if you wanted to too.

We missed out on seeing two main attractions: the Slavin Memorial and Devin Castle, the latter of which is a bit out of the city.

Since Slovakia really took me by surprise, I’d also love to return to the country one day to see the natural beauty of the Tatra Mountains and Slovak Paradise National Park!

We didn’t have enough time there to work out the public transport system but it’s a pretty small city so you can walk everywhere (though your legs and feet will pay for it at the end of the day).

How to Get To Bratislava

Bratislava is only about two hours away from the UK by plane and you can find some very cheap flights.

In fact, that’s the only reason we visited Bratislava in the first place: because the flights were cheap.

We each paid £45 for a return from Birmingham to Bratislava with Ryanair.

I would have never even thought of visiting the city otherwise, but boy am I glad I did.

It’s also the perfect place to visit by train while interrailing as it is so close to its neighbouring countries.

We flew into Bratislava, spent two nights in the city and then got a train to Vienna to spend two nights there as well.

Bratislava and Vienna are the two closest capital cities in Europe and it’s only a one hour £12 return train journey to Vienna, making it ideal to visit both cities at the same time!

Where to Stay in Bratislava

Freddie Next to Mercury Hostel and Apartments 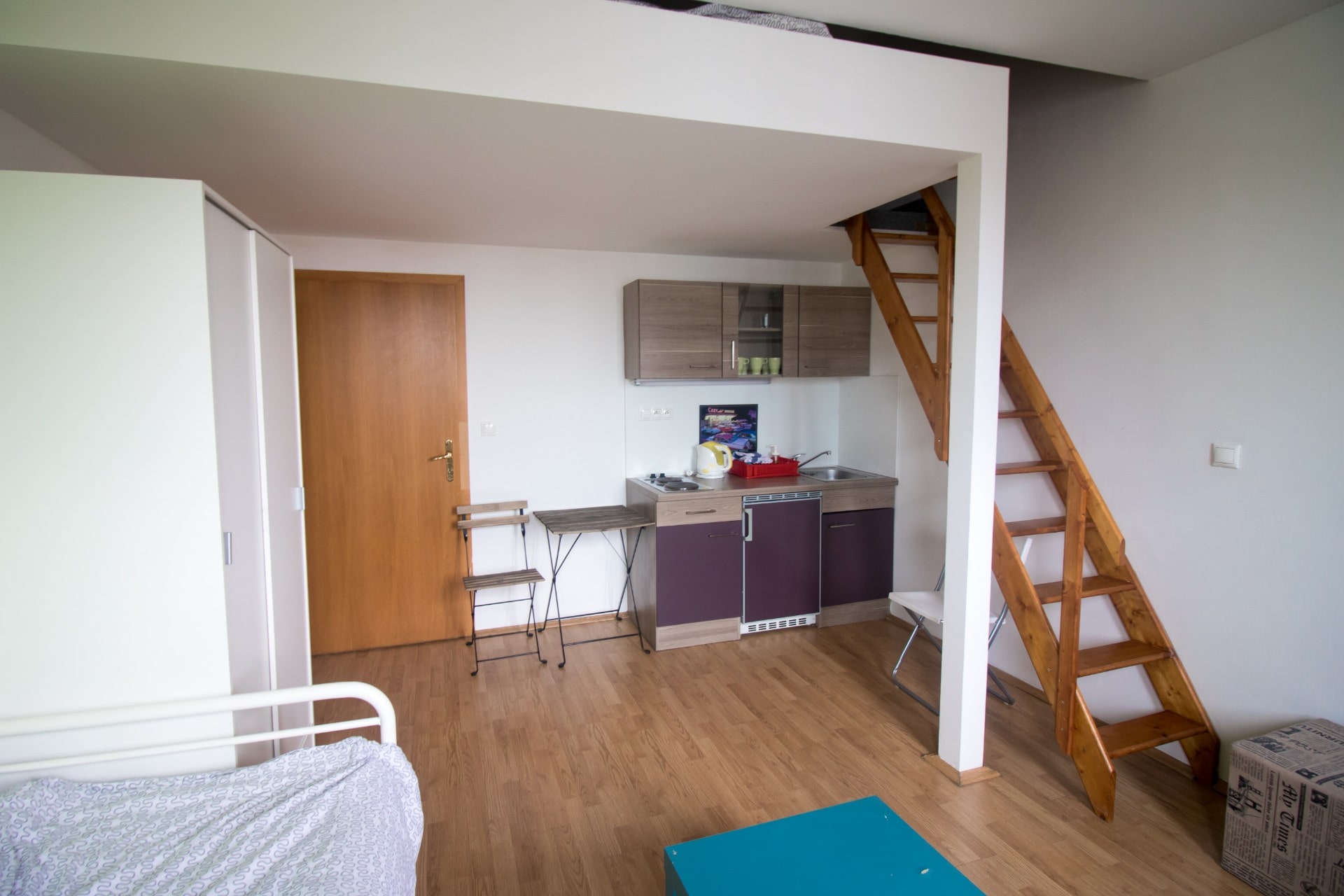 The likelihood is that even if you only have time to see Bratislava in one day, you’ll still probably need somewhere to stay for at least one night.

All we were after by way of accommodation was something cheap and cheerful. Somewhere to rest our heads for the night but not much else.

The cheapest place we could find (that didn’t look completely grim) was Freddie Next to Mercury Hostel and Apartments.

For only £15 a night each (I KNOW!), we got a whole ass apartment to ourselves. Bargain central.

At a 25-minute walk from the Old Town, the location of the hostel wasn’t ideal for exploring the main sights.

However, it was only a 5-minute walk from the main train station which was so ideal as we had to catch a train to Vienna on our final morning.

One other downside is that with no air con, the room was bloody boiling. And we visited in March.

Cue flinging all the windows open 24/7!

One Day in Bratislava Itinerary 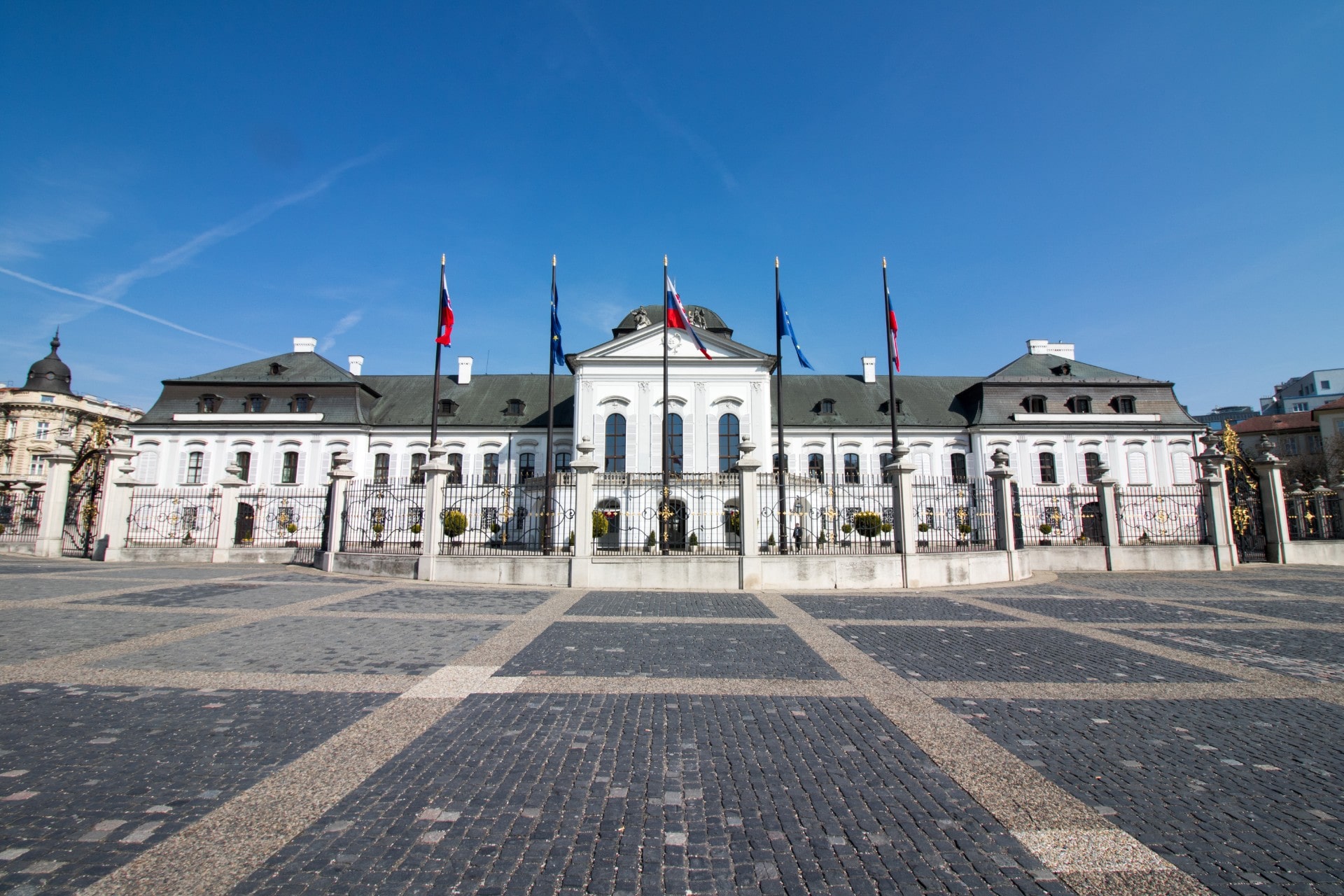 Grassalkovich Palace is the residence of the president of Slovakia.

The building is gorgeous and is surrounded by French gardens that are open to the public.

Price: Free – but you can’t go inside the palace!

Michael’s Gate and the Museum of Arms 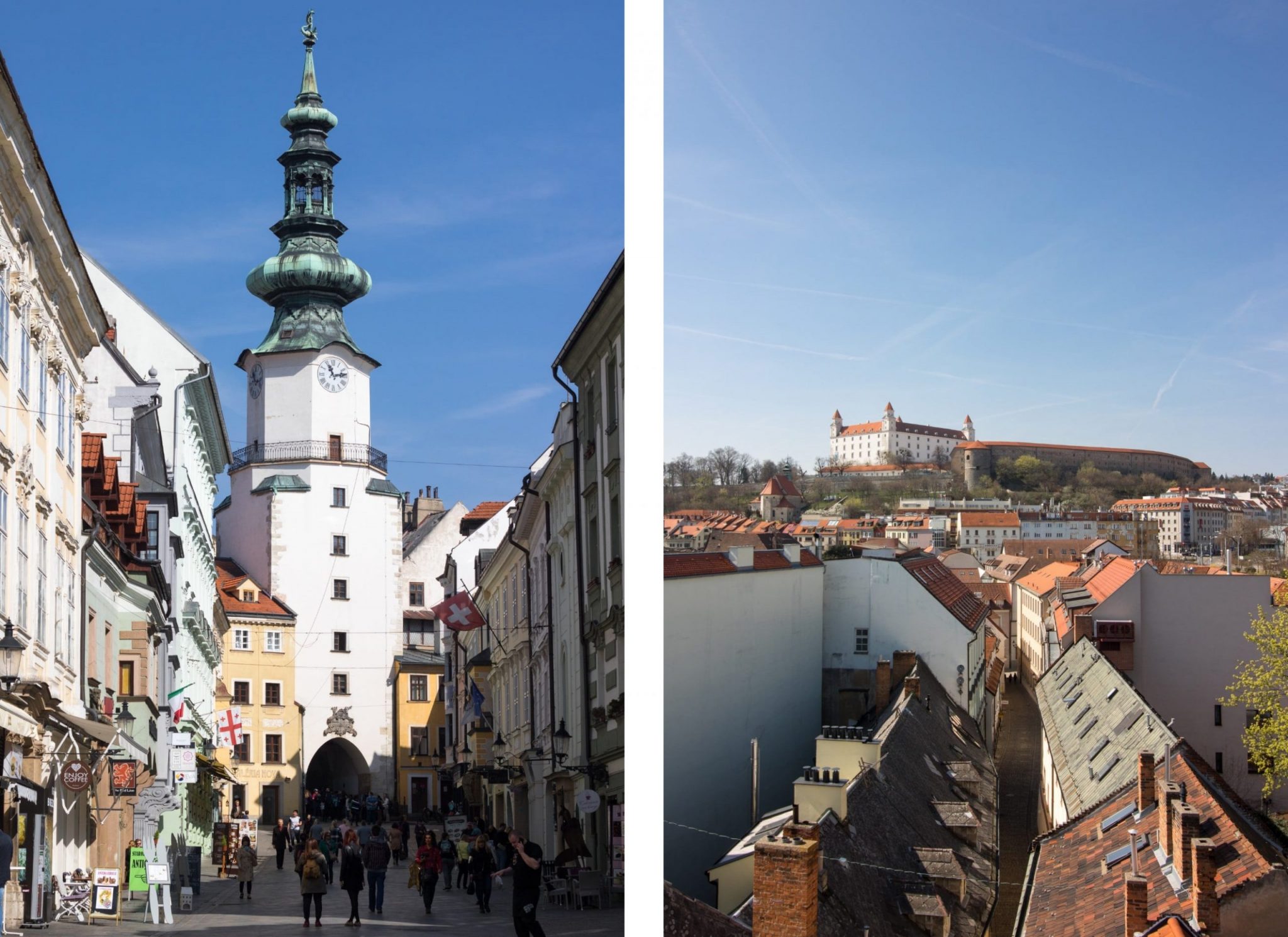 Dating back to the early 1300s, Michael’s Gate is the only city gate that has been preserved of the medieval fortifications, making it one of the oldest buildings in the city.

Climbing to the top of the tower, through the Museum of Arms (exhibiting the history of Bratislava’s fortifications and many weapons), gives you amazing views of the city!

And when we were up there we had the entire thing to ourselves.

From here you can see three of Bratislava’s main attractions: the castle, St. Martin’s cathedral and the UFO.

Price: To enter the Museum of Arms and get up to the lookout point, you have to pay £2 with a City Card or £3.80 without. Your ticket also grants you entry into the Museum of Pharmacy, but we didn’t have time to visit there. 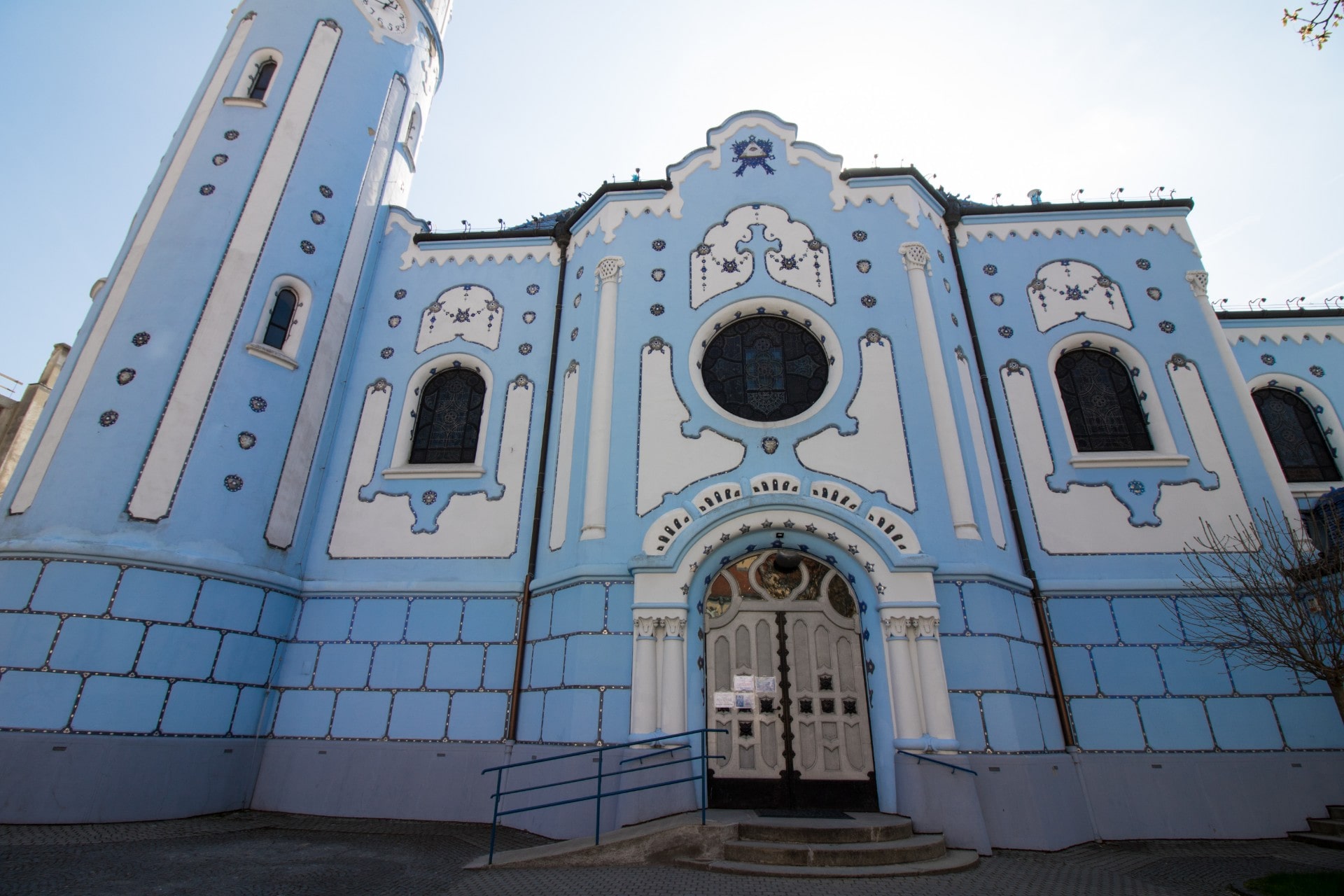 The Blue Church, officially known as the Church of St. Elisabeth, is Bratislava’s most appealing art nouveau building.

It doesn’t take a genius to work out why it was given the nickname “Blue Church”.

It’s a beautiful lil’ Instagrammable building and one I’d definitely recommend including in your Bratislava itinerary! 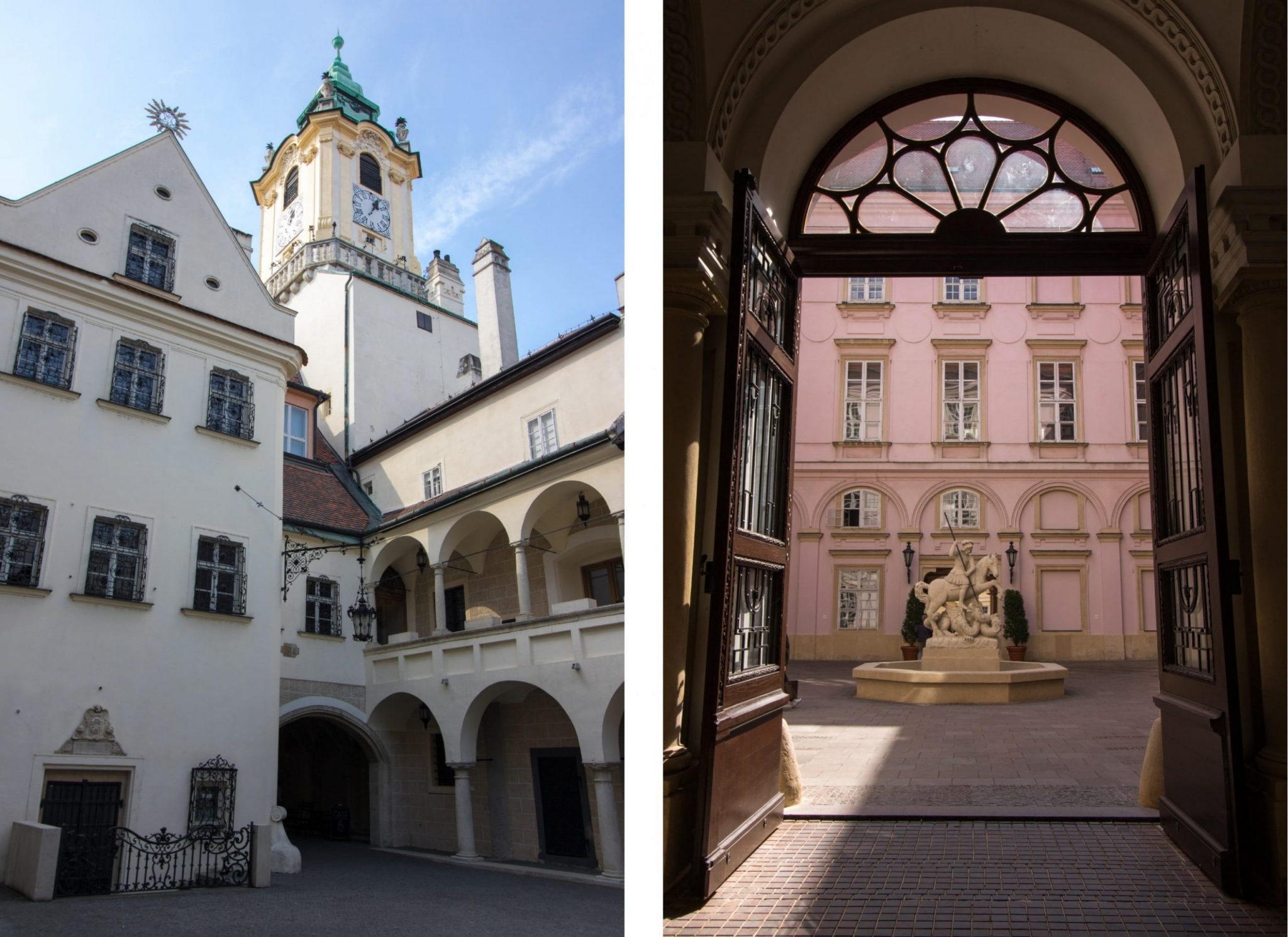 At the heart of Bratislava’s Old Town, you’ll find the Old Town Hall, the oldest city hall in the whole of Slovakia.

The hall houses the Bratislava City Museum which, to nobody’s surprise, documents the city’s history.

The City Hall’s courtyard is really cute as well.

Here you can find the famous fountain of St. George and the Dragon! 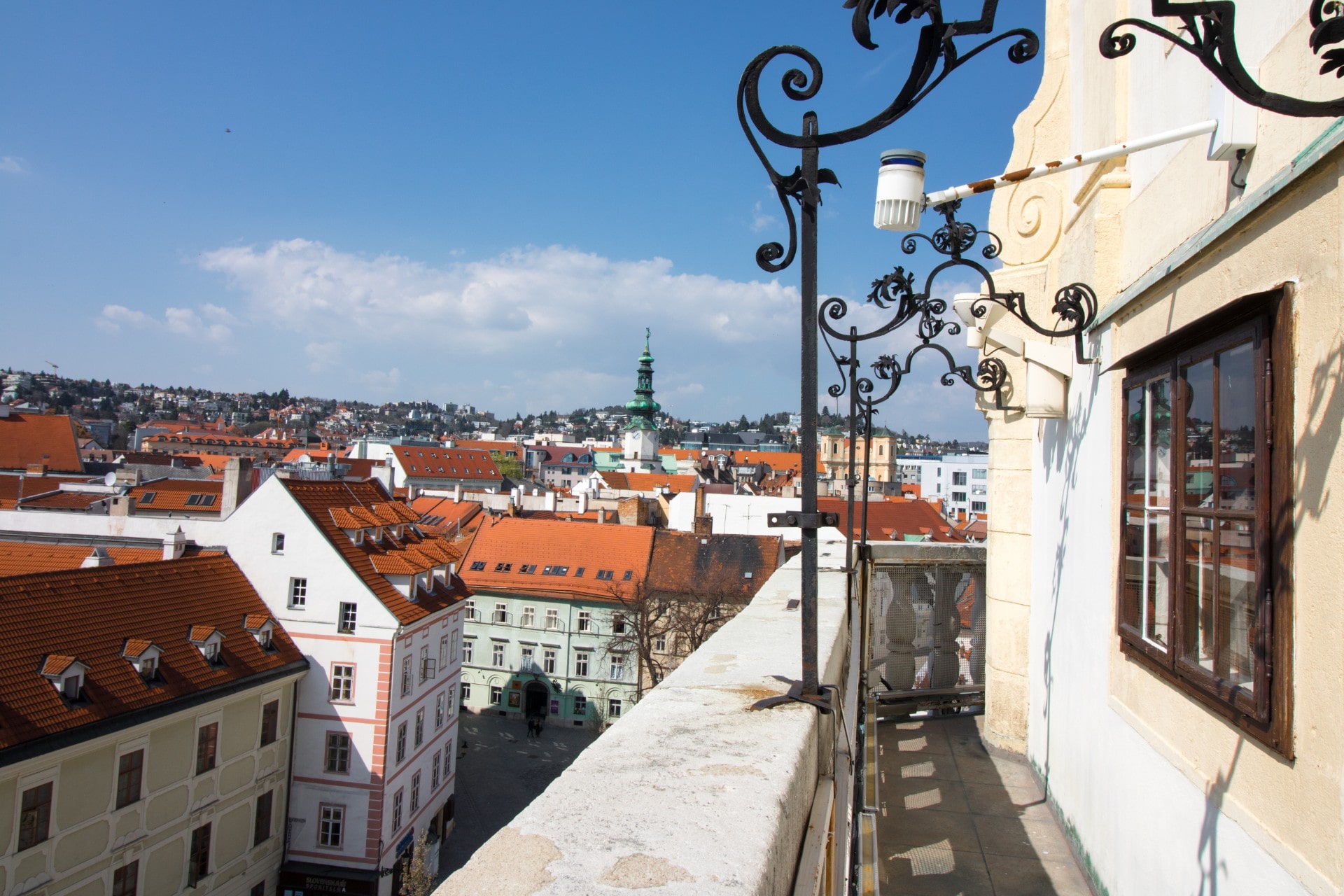 Once you’ve had a browse around the museum, you can then head up the tower for another amazing viewpoint offering views across the main square and the rest of the city.

Again, we had the viewpoint all to ourselves which made it even more special. 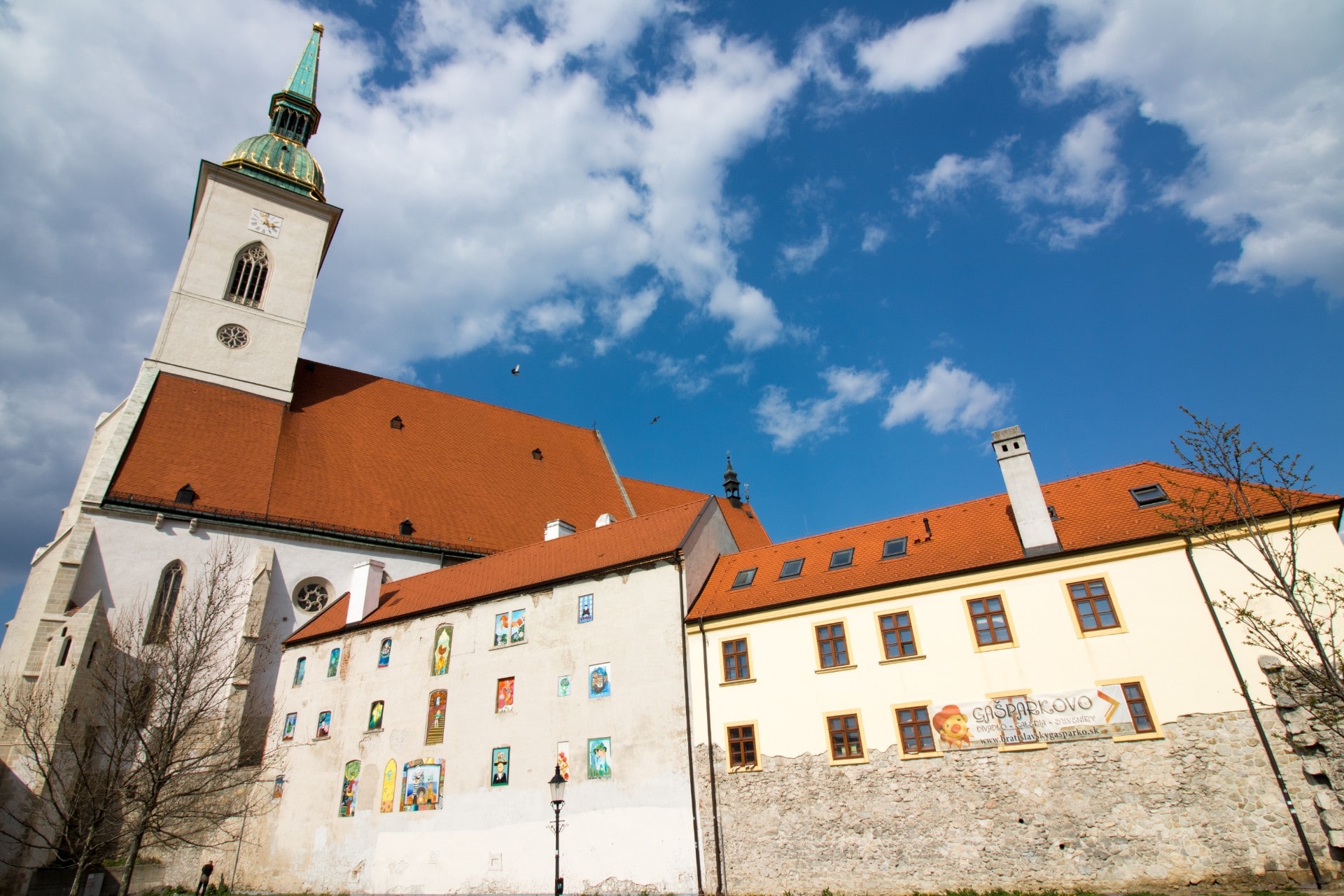 St. Martin’s Cathedral is the largest church in Bratislava and is pretty freakin’ beautiful.

On entering the cathedral we were given scarves to cover our bare shoulders, so be sure to dress appropriately when visiting. 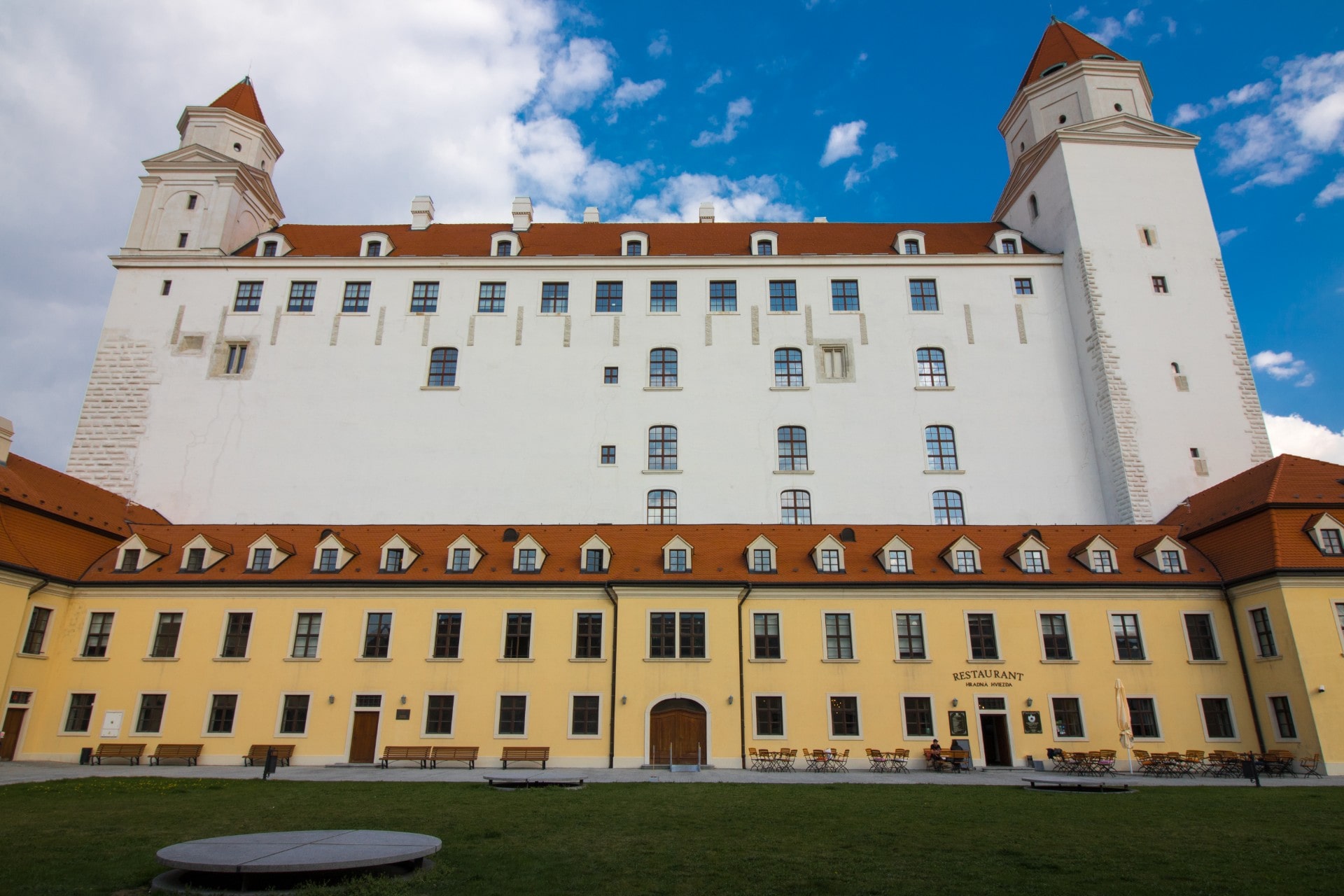 Bratislava Castle (Hrad) sits at the top of a hill overlooking the Old Town and has served as a venue for the Slovak Parliament and houses collections of the Slovak National Museum.

We visited the castle at the end of the day so by the time we had walked up the hill we were absolutely knackered.

We both just sat in the grounds taking in the view and the fresh spring air.

The location provides some pretty spectacular views of Bratislava, Austria and, in clear weather, parts of Hungary too.

Price: Free to wander around. Entry to the Slovak National Museum costs £5.90. We didn’t bother to pay to go inside. 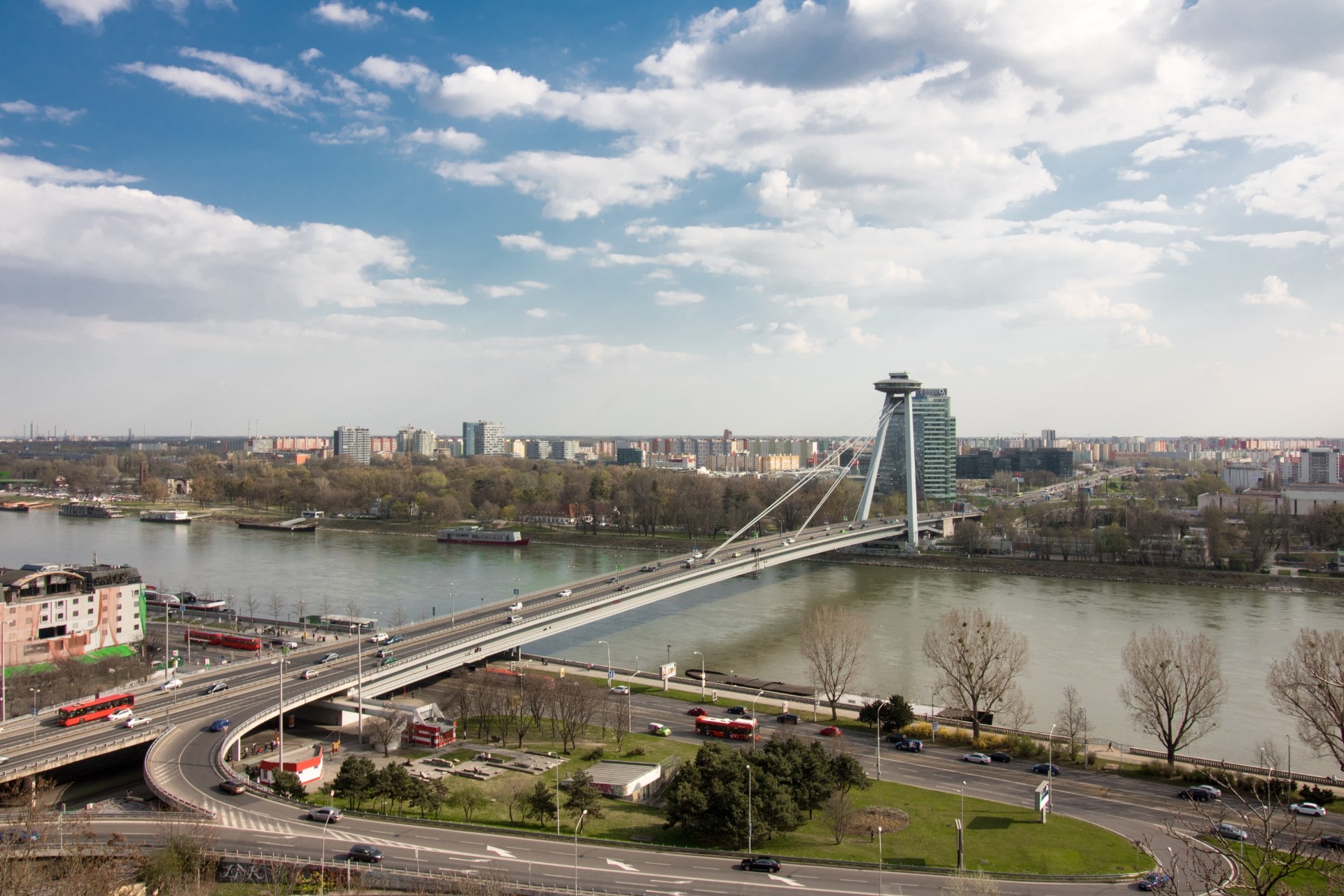 The UFO (appropriately named because it looks like a spaceship) is a restaurant and observation deck 87 metres above Bratislava’s Most SNP bridge and the Danube river.

Before I talk anymore more about the UFO, I must say that we didn’t actually get to go up it.

We walked the entire length of the bridge only to be turned away because the UFO was closed for a private event. We were gutted!

But hey, there’s always a silver lining. More on that a bit later…

Anyway, from what I’ve seen in photos, the views from the restaurant look incredible.

It would be the perfect place to watch the sunset.

The restaurant serves both traditional Slovak and international cuisine; however, it’s very pricey and not for the budget travellers among us unless you fancy treating yourself.

Price: Access to the lifts costs £5.40, but if you eat at the restaurant, the entry cost is deducted from the bill.

Where to Eat and Drink in Bratislava

It’s safe to say our day in Bratislava wasn’t a healthy one.

But, in our defence, we did walk over 18km in one day so I think we deserved it. 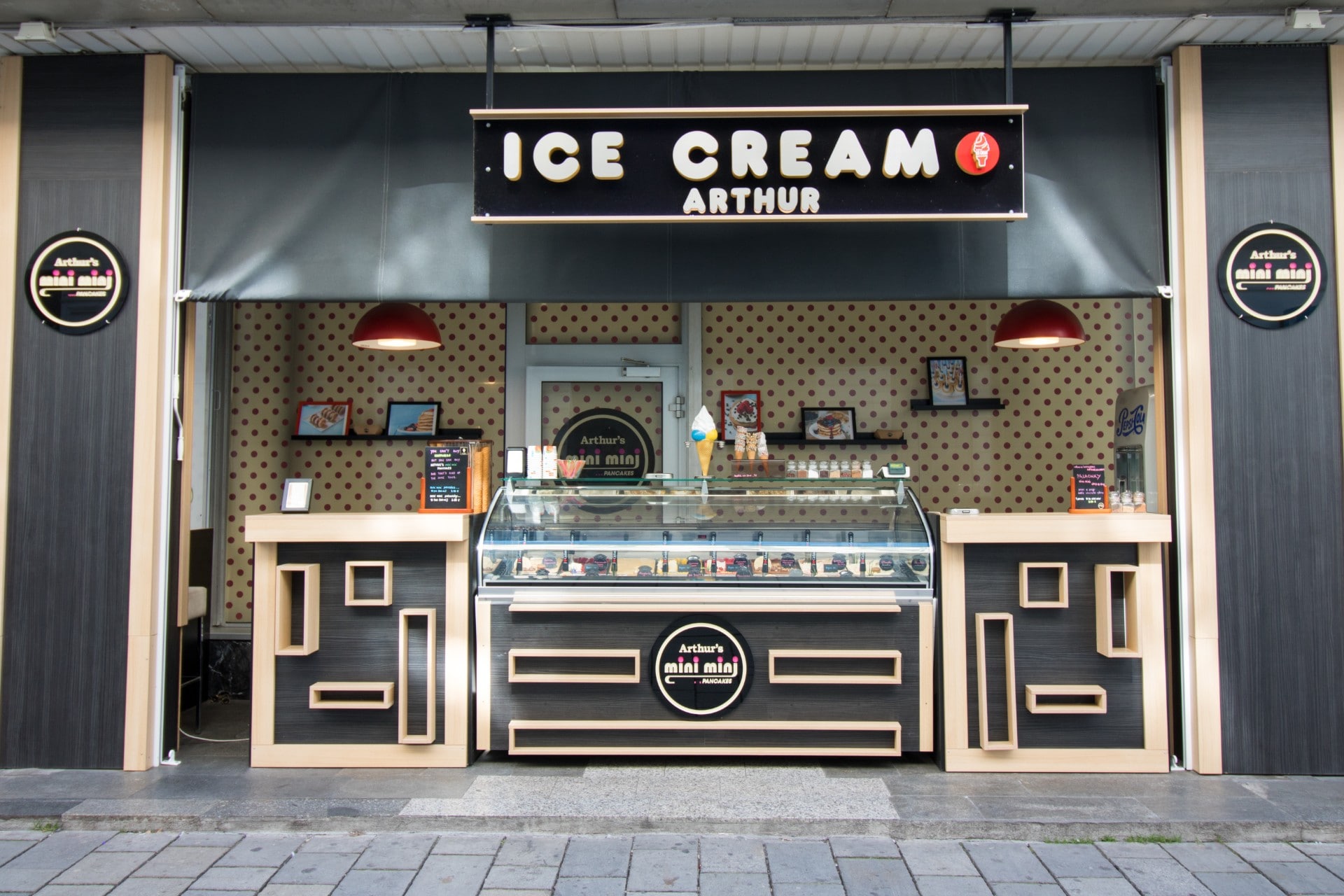 For breakfast, I went to an ice cream shop. A good start, I know…

I ordered 10 mini mini (they were so mini that the word had to be used twice) pancakes from Arthur’s Ice Cream which cost £2.90 and came with various sauces.

I don’t have a very sweet tooth but these definitely hit the spot.

You can find Arthur’s Ice Cream in the centre of the old town – you cannot miss it! 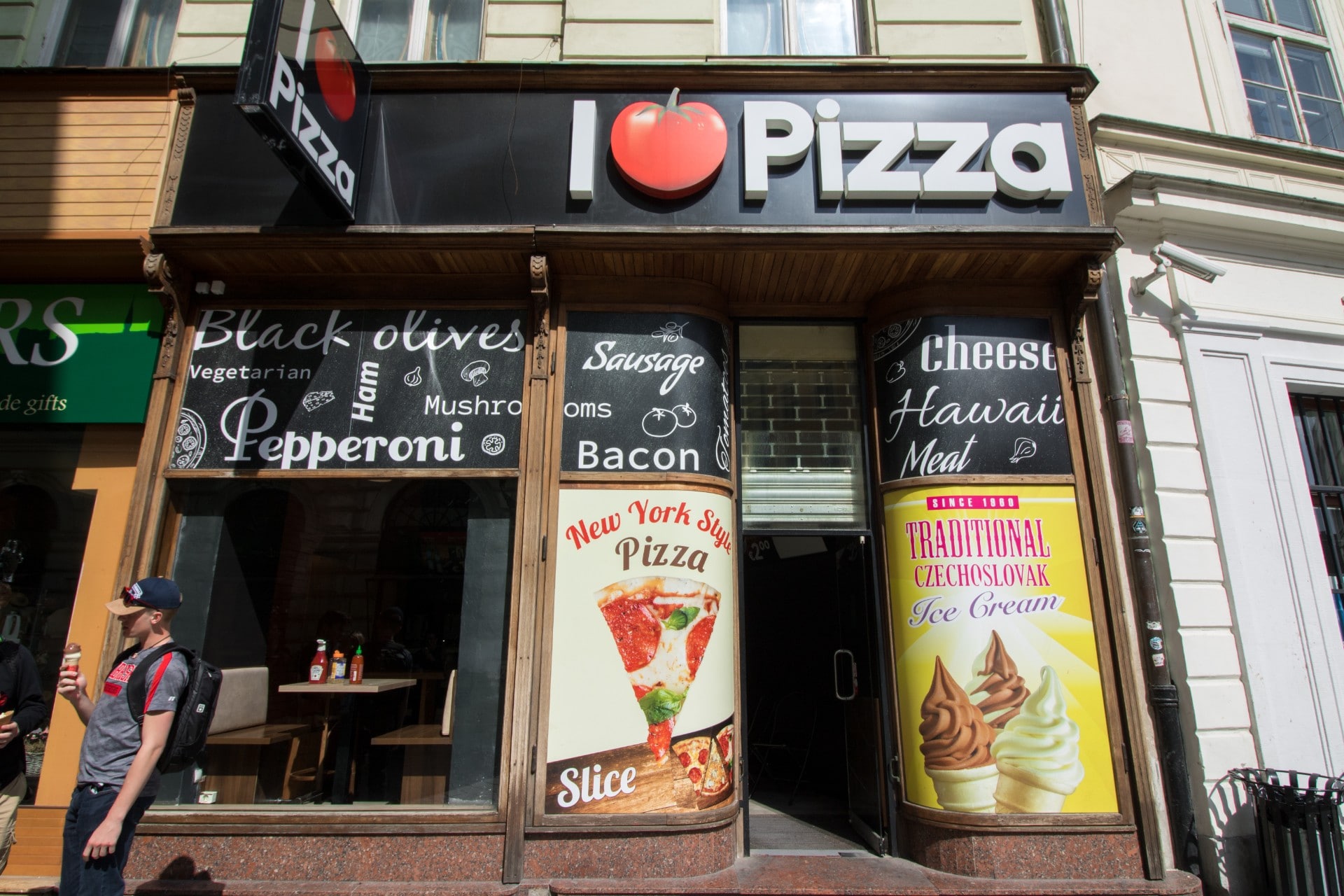 Everywhere you look in Bratislava Old Town you’ll see tourists and locals alike chowing down on a slice of pizza.

Sometimes while travelling you don’t have time to sit down at a cafe or restaurant for lunch.

You just need a quick energy fix to keep you going.

And that’s what this pizza joint provides.

We grabbed a couple of large slices of pizza for only £1.20 a slice. It was nothing extraordinary but tasty and what we needed.

I ❤ Pizza is a solid fifteen steps away from Arthur’s Ice Cream. 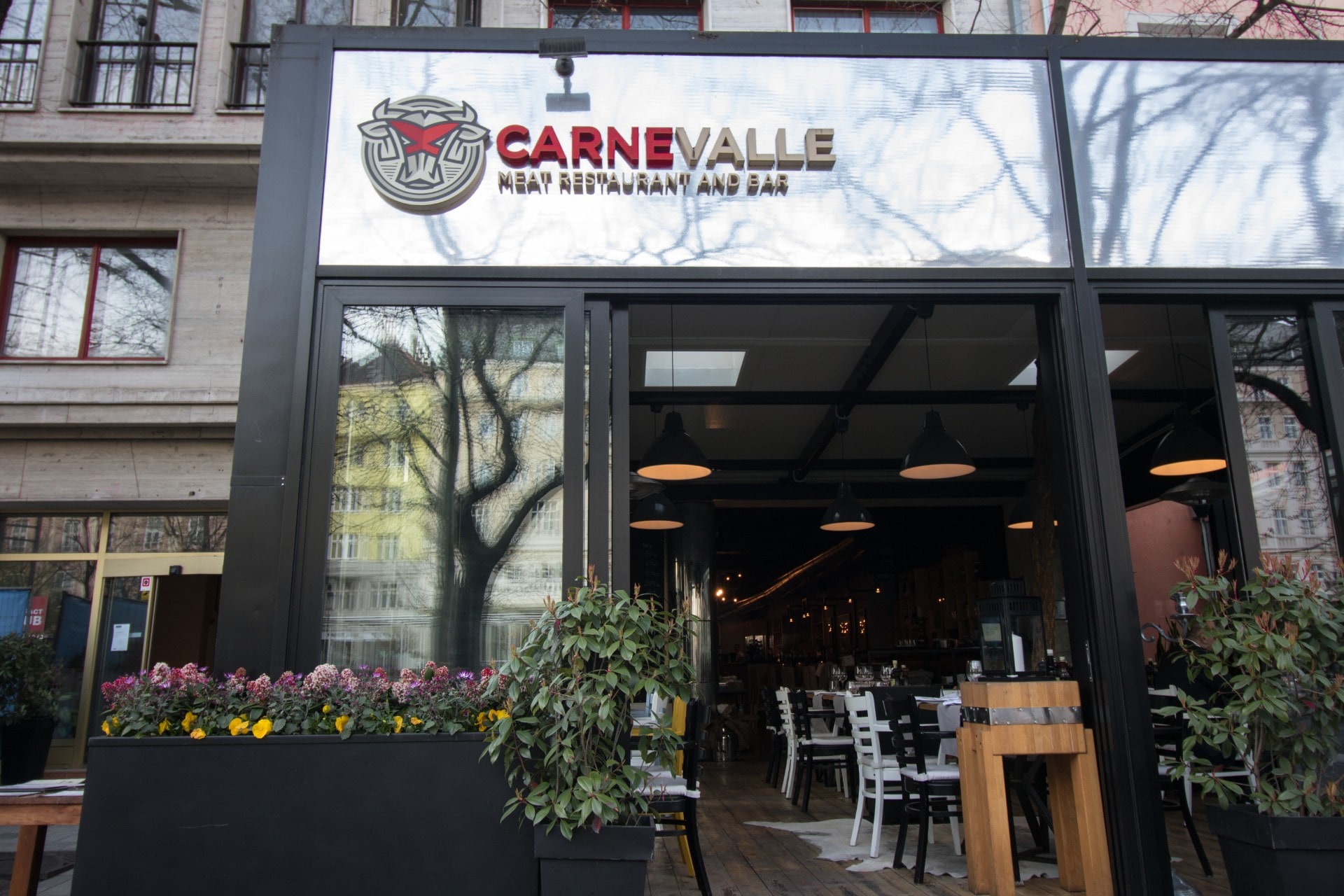 For dinner, after walking a silly amount, we were ready to settle for anywhere for dinner.

We passed this very meaty restaurant, Carnevalle, on our way back from the castle and thought “why not” because the steak was cheap and I never order steak.

We sat outside in the lively Hviezdoslav Square to make the most of the lovely spring weather, while they were packing away the rest of the tables and chairs #classicBrits.

The food was just superb and we got complimentary bread which is always good in my books.

The interior decor of the restaurant was really unconventional and modern too.

So that’s two big ol’ thumbs up from me! 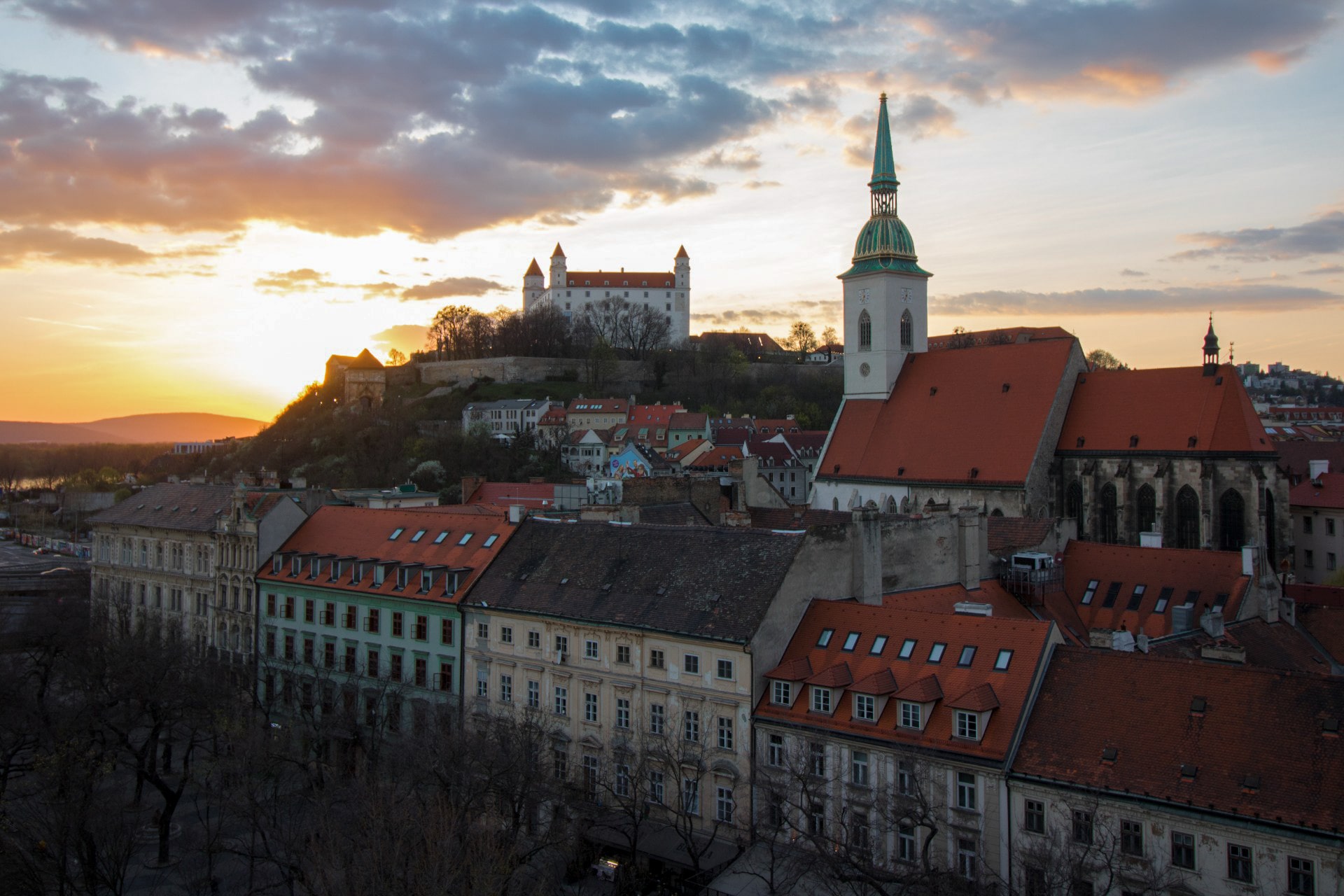 Ah, the highlight of our trip! The most amazing way to finish off our day in Bratislava.

The cherry on top of an already very tasty cake.

This vodka bar, Sky Bar Bratislava, should absolutely be at the top of your Bratislava itinerary!

We didn’t think we’d actually get a chance to go here as we were running out of time, but because we couldn’t go up the UFO we had plenty of time to spare.

Not only were the views across the city and castle mind-blowingly epic, but the atmosphere and cocktails were just as good.

It was so serene, with chill indie music playing in the background.

We couldn’t wrap our heads around why it was so quiet, but we knew for sure that this bar was a gem. 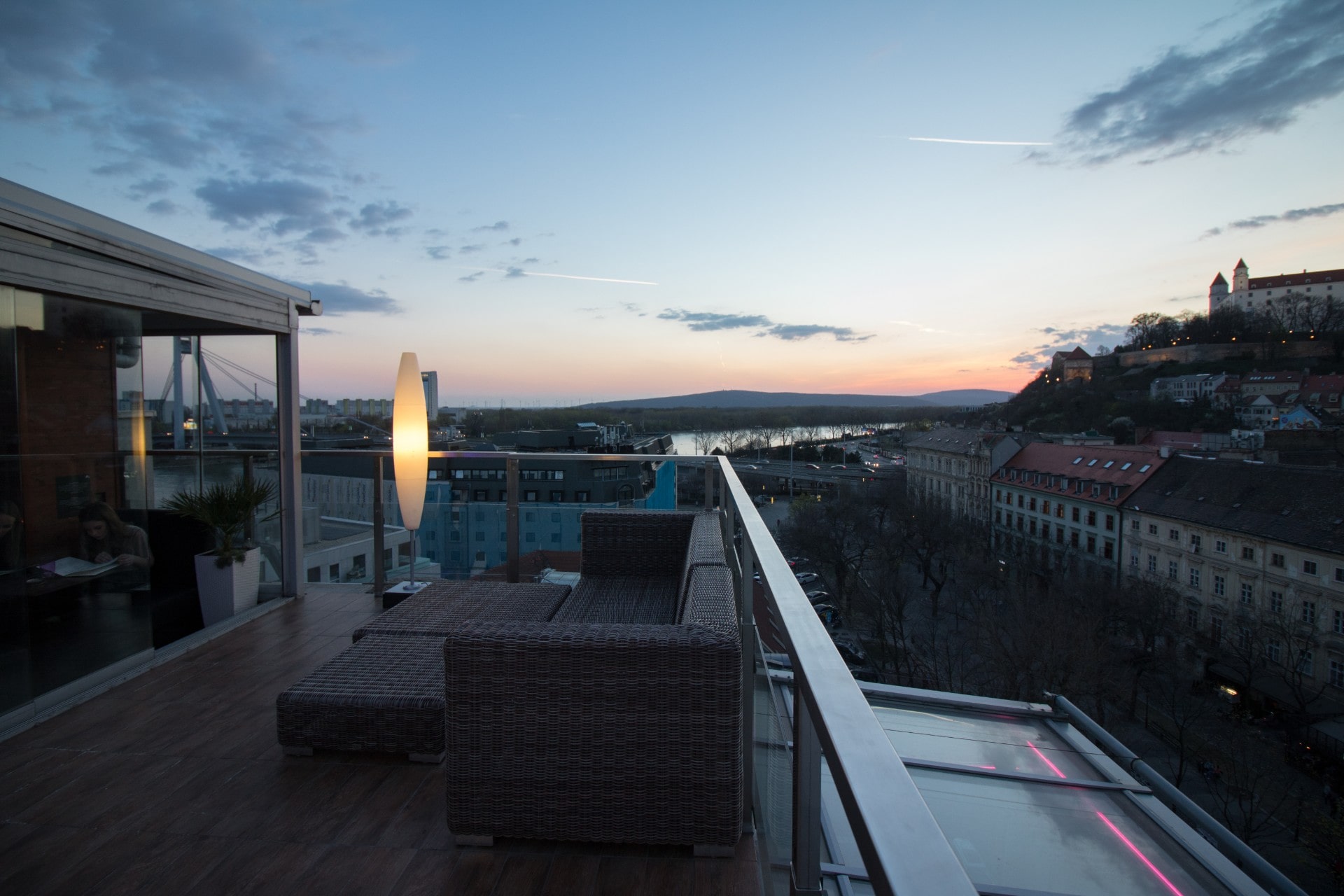 I ordered a Vodka Lychee for £5.80 which was comprised of vodka, sweet lychee, fresh lemon and lemonade.

It was so refreshing and just what I needed after all our walking. Jess went down a slightly more exciting route ordering a Hey Bubble Mama, a concoction of bubblegum, forest fruits and fresh red grapes, for £6.60. Yum!

An amazing end to a short but sweet visit, that’s for sure.

So have you ever spent one day in Bratislava? What were your thoughts on the city? If you haven’t visited before, have I tempted you now?

There are so many things to do in Bratislava, plus it’s such a cheap and friendly city! You really can’t go wrong.

I was given a complimentary city pass by Visit Bratislava for the purpose of this review of but as always all opinions are my own. 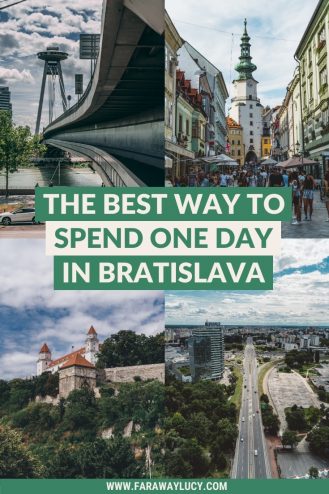 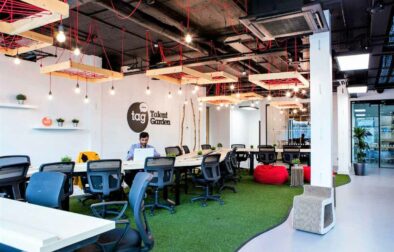 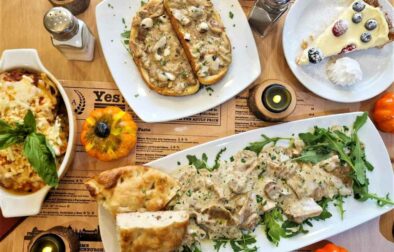 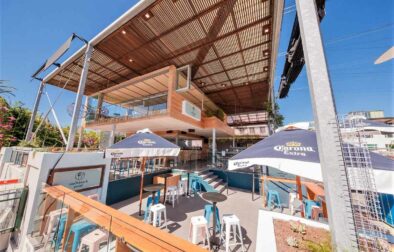 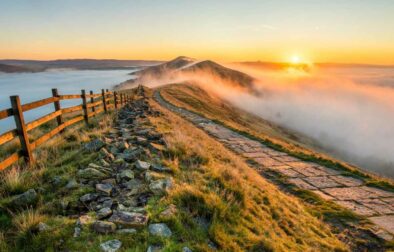 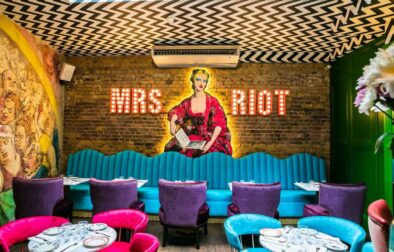