AfricaTanzania
53 years ago
by

Looking to escape to Zanzibar? Well, you have great taste!

Set just off the coast of Tanzania, the East African island of Zanzibar is known for its crystal clear turquoise waters. However, there’s more to this island than just beaches.

It has everything from history and culture, to fun activities and flavoursome food.

So without further ado, here are the 6 best things to do in Zanzibar that you can’t miss!

This article is written by Faraway Lucy writer, Liv Stringer. 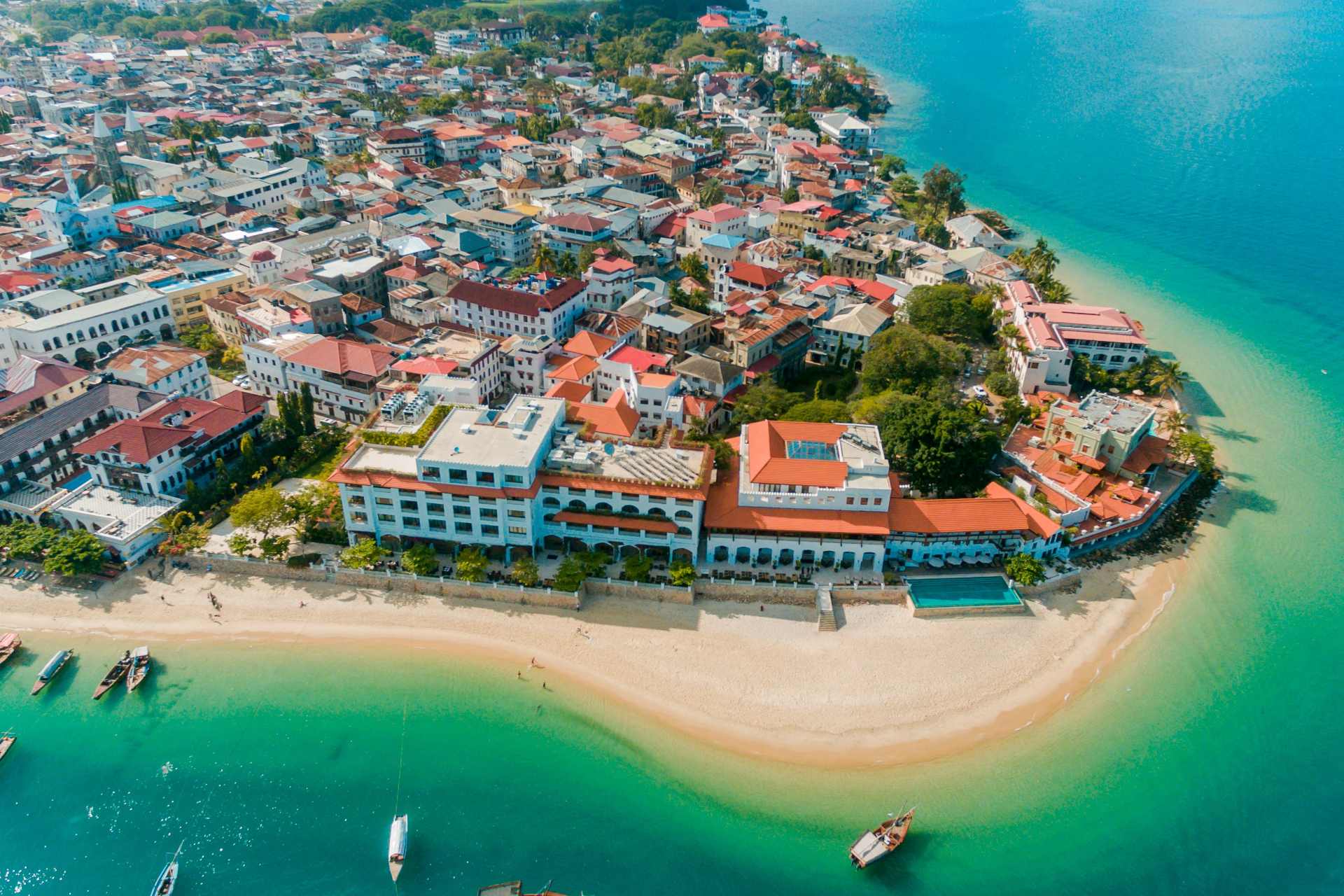 Although the main touristy area of the island is on the East Coast, Zanzibar’s airport is in the West, near the main city of Stone Town. It’s definitely worth spending a day or two in Stone Town before you head to the beach.

I’d recommend getting a guided tour of the city. We got ours in a package with the Prison Island Tour (see below) for a reasonable price, though you should definitely try haggling. I found the tour interesting and informative.

We got to see the house where Freddie Mercury spent the first nine years of his life and learnt a lot about the city’s history with the slave trade.

Make sure you also visit The Africa House Hotel which has a rooftop restaurant with an amazing view of the sunset.

It’s a bit pricey compared to most places on the island. But it’s still less than a tenner for a pretty fancy meal so you might as well treat yourself!

2. Take a boat ride to Prison Island to see the giant tortoises 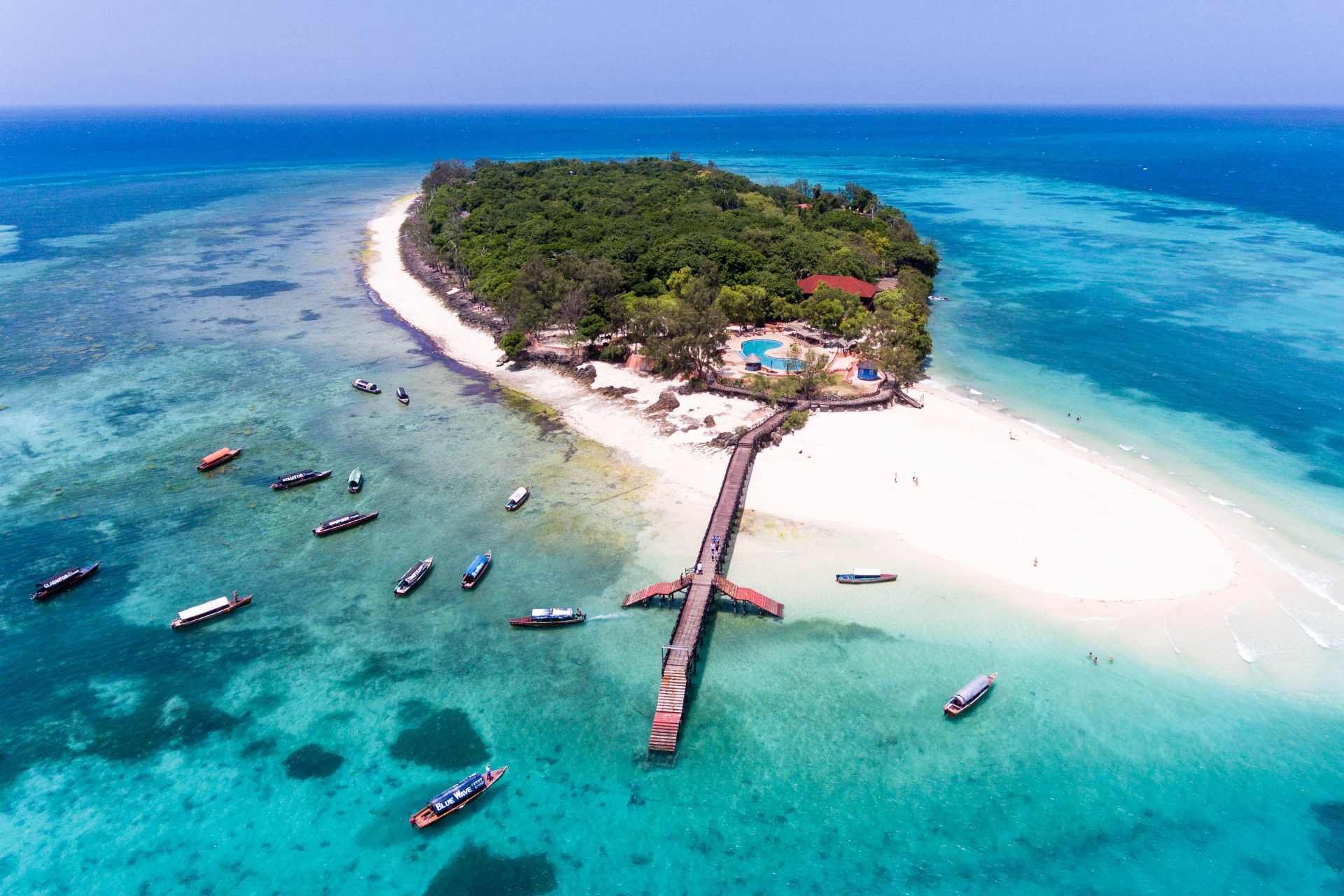 A short boat ride away from Stone Town is Prison Island. Its name comes from the fact it was once used to imprison slaves before they were shipped abroad or sold at the slave market in Stone Town.

The island is now home to an abundance of adorable giant tortoises.

And by giant, I mean they are literally the size of a small human.

These were a gift to the island by the British governor of Seychelles in 1919.

The oldest of these tortoises is now 194 years old and they have produced a multitude of offspring on the island.

The tortoises are so friendly, and visitors can feed them and even give them massages, which apparently, they love.

The ‘prison tour’ which is included in most tour packages advertised in hotels and on the beach is a bit of a joke.

The island’s ‘prison’ is literally just the courtyard of what looks like an overgrown café, so the ‘tour’ lasts about thirty seconds. But it’s one of the best things to do in Zanzibar just for the tortoises! 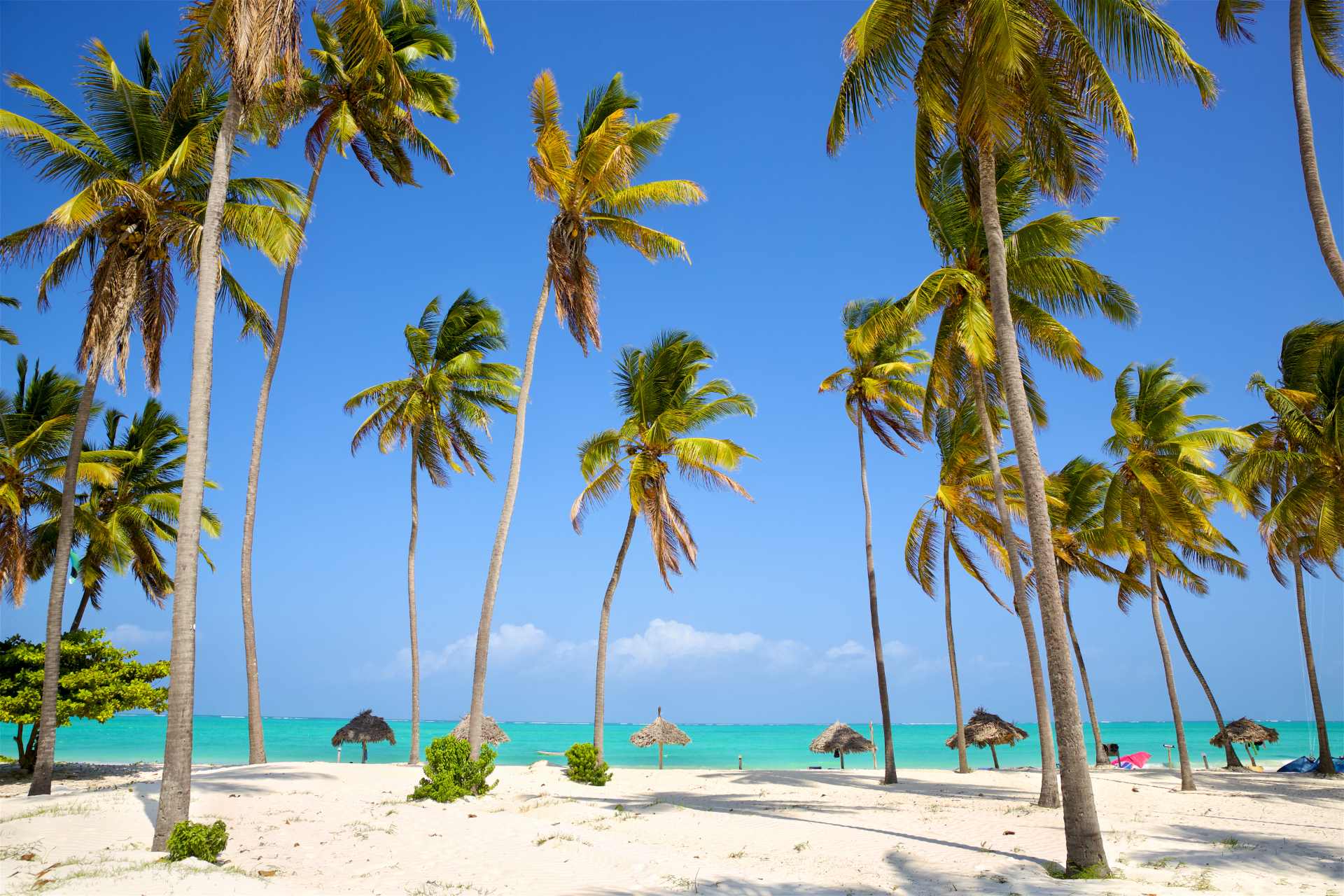 You can get buses (dala dalas) across the island for a couple of quid or a taxi, which takes around half the time, for about £30.

We opted for a taxi because the buses are minuscule and cramped, but my bank balance is now heavily regretting it.

Both are lovely and have loads of incredible beachfront hotels.

But I would recommend staying in Paje if you’re after more of a lively holiday as there is way more going on there.

My boyfriend and I spent the majority of our holiday rinsing the facilities of each of the hotels.

This saw us stroll from venue to venue, purchasing a drink and then lazing about in the hotels’ pools or on their outdoor beds.

It tastes great and also comes in a really pretty bottle that you can take home, whack a candle in and use as a budget souvenir.

If you’re looking for a fun club night here, head to Demani Lodge on a Thursday evening.

Just a short taxi ride away from Paje and Jambiani, they play a different genre of music every week.

There’s a pool there too which is lots of fun after you’ve had a few.

We tried it and thought it was delicious; however, our friend Chris claims it renders him unable to form sentences, so sample it at your own risk. 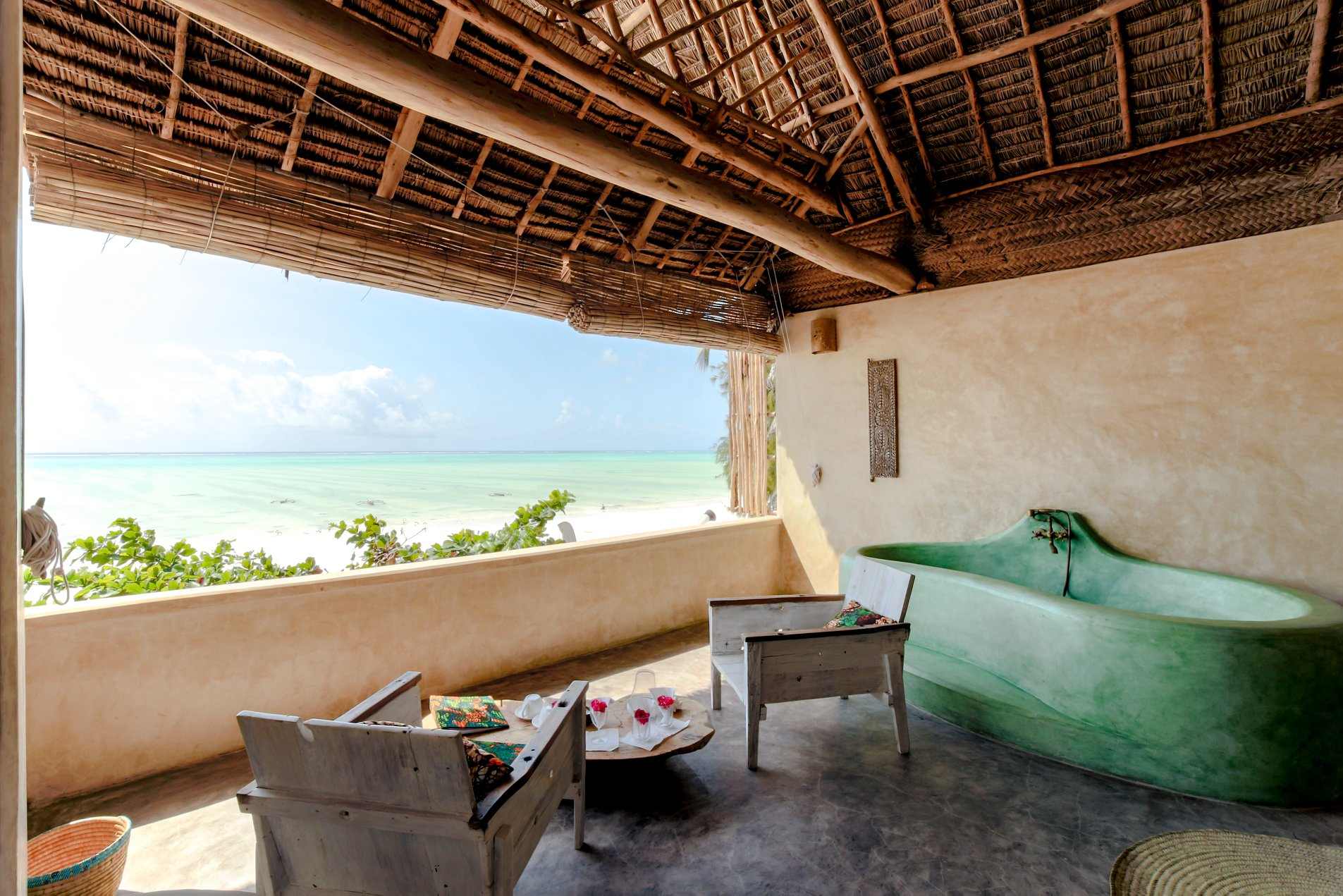 One of the hotels in Paje is called Mr. Kahawa and it has what I am convinced is the nicest loft room in the entire world. There’s an enormous marble bathtub that I would give my first child to be back inside.

This is accompanied by a breath-taking view of the beachfront.

We woke up early in the morning to watch the sunrise from our enormous bed and it was like we were in heaven.

I think my life peaked at that moment.

The hotel even provides you with matching Mr and Mrs Kahawa bathrobes that my boyfriend and I were annoyed we didn’t steal.

At around £120 a night, it’s quite expensive so we could only afford to stay there for one night.

But if you have the money I would recommend spending your whole trip there because I really did not want to leave.

Staying the night in that room basically left me bankrupt.

However, I would one hundred per cent say that it was worth it and if that’s not a good review I don’t know what is.

5. Catch the sunset at Michamvi Kae 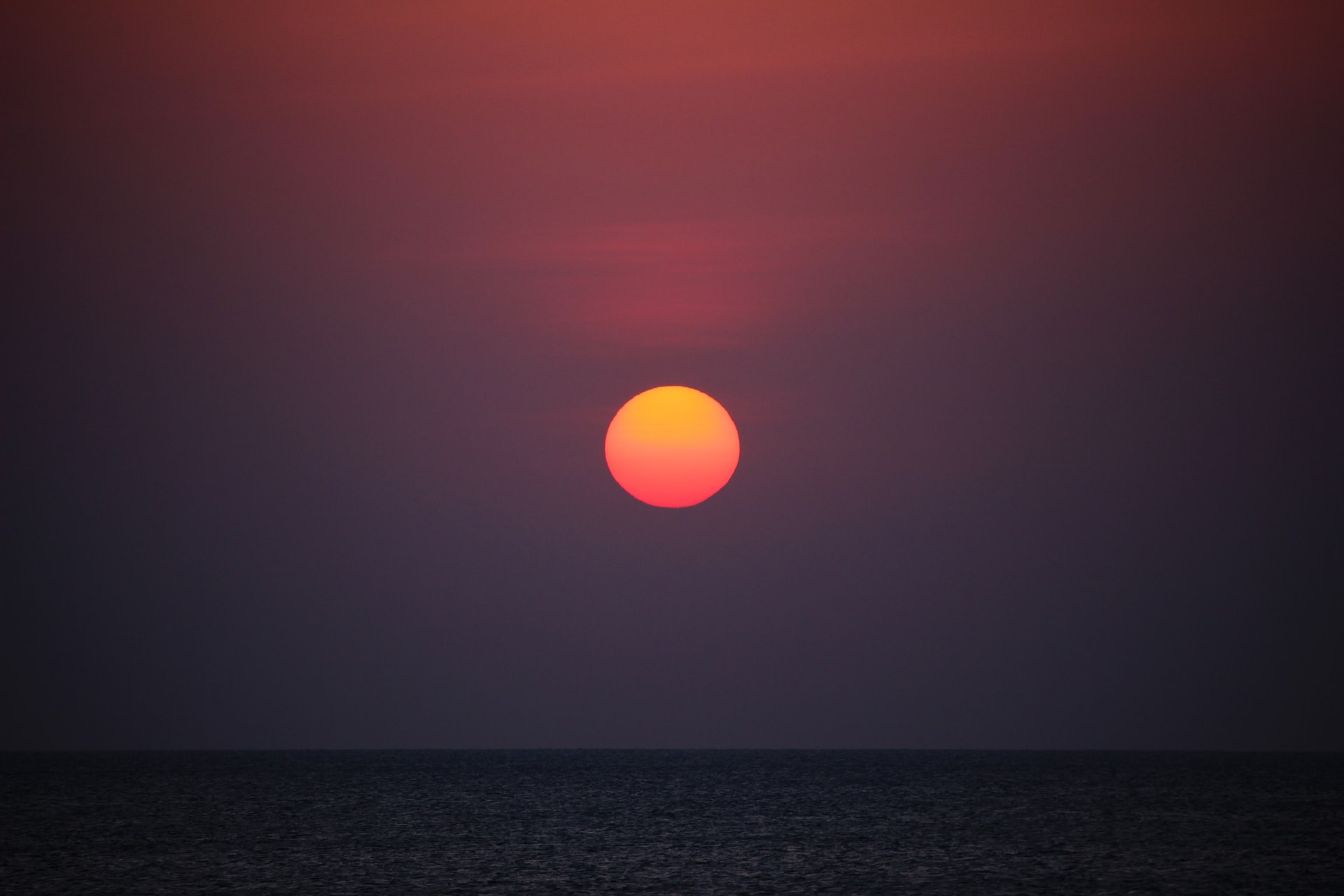 Annoyingly, you can’t see the sunset from Paje or Jambiani.

But if you trek a few miles north to Michamvi Kae there’s a lovely beach that is a popular spot for tourists to go and admire.

It took us about twnety minutes to drive there on a scooter.

You can hire one for around £20 a day so long as you have a valid driving licence.

However, being on the back of the scooter was terrifying as there don’t seem to be many road safety laws in Zanzibar and drivers are pretty reckless.

So I wouldn’t recommend doing this unless you’re an experienced scooter driver.

There’s a really nice bar on the beach there which is overpriced but it has these lovely swinging beds that you can relax on.

During the sunset, there’s street entertainment like fire dancing and men doing the most elaborate gymnastic tricks.

Unfortunately, it was quite overcast on the day we were they, so the sunset was a little anticlimactic.

But I could tell that it would have been spectacular if we had looked at the weather app beforehand and gone on a less cloudy day.

6. Go on a Safari Blue tour 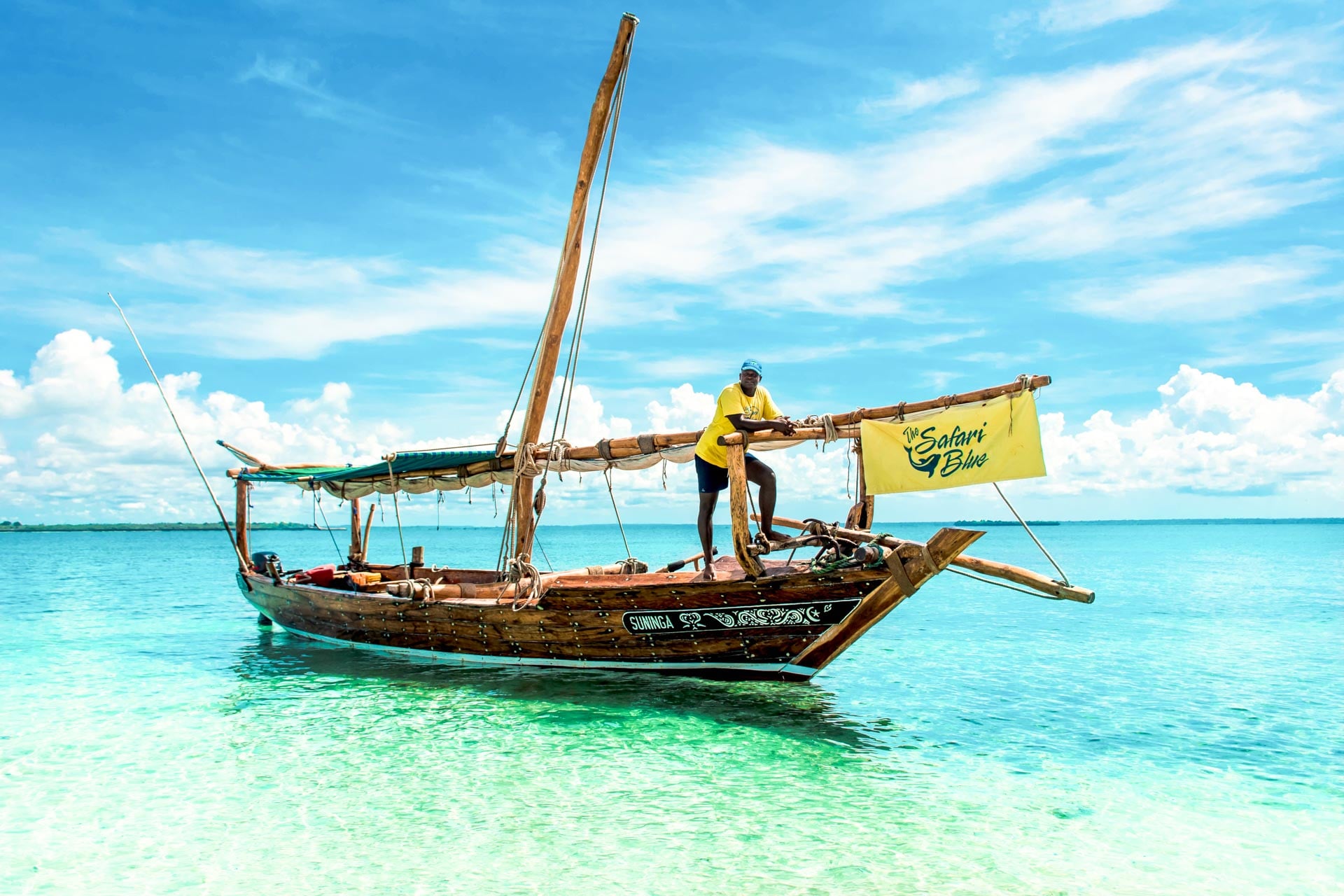 As you walk along the beach, men and women will inevitably approach you trying to sell you all kinds of wares and experiences.

The most commonly advertised experience is the Safari Blue tour, which is definitely one of the best things to do in Zanzibar.

We managed to haggle down the price to about £25 each and it was undeniably worth the money.

You can book these tours through the hotels.

But as one tour guide rightly told us, most of the hotels are run by rich white people.

This means it’s better to give the money to the locals on the beach.

Safari Blue takes you on an all-day boat trip to some gorgeous little islands and lagoons to swim in.

The water around the islands is so blue that it’s hard to believe it’s not an Instagram filter.

You’ll also get to tuck into an absolute feast of lobster and other seafood on one of the islands.

I’d recommend slathering on suncream at regular intervals during the day as there isn’t much shade on the islands.

As a result, my boyfriend and I burnt to an absolute crisp!

Not the best end to our trip.

So there you have it: those were the 6 best things to do in Zanzibar!

Are you planning a trip to Zanzibar?

I hope you have the best time and manage to check out some of these places! 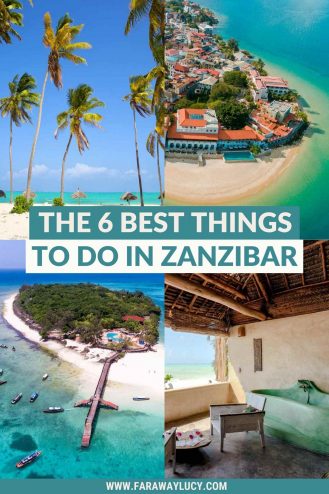